When Rebecca first stepped out of the cab, I thought, I didn’t know people could be this beautiful.  What beauty means here: when you can see (and feel) how a person’s way of dress represents generations of a people who knew how to harness the brightness and the subtleties of the rainbow, the sun’s warmth, the shock of the peacock’s flourish.  In the split-second of this first glance, Rebecca wooed me completely, and I felt for the first time I understood how a woman can be much more than topically beautiful if she is wearing the right thing. 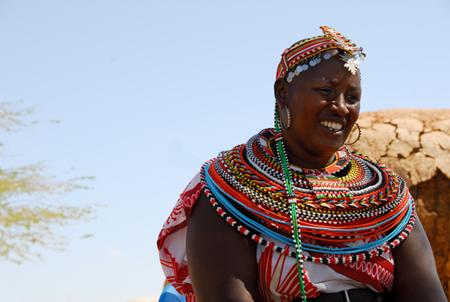 For Samburu women, the right thing is several pounds of beads ringed gracefully around the neck, dangling mirrors on a crown-like headdress that sing with each head-turn, carefully bent tin bracelets and anklets that bind the appendages in flashes of silver, and a wrap of cloth that ties at the shoulder and turns into a dress that is always some breathtaking shade (and I mean leaving you without breath) – the manifestation of the exclamation point in hue form.  There are as many variations on the color and pattern of beadwork as there are stories told by grandparents; if I’m diligent enough, I’ll sit down one of these days and devote a blog to the story of the beads.

The second day I met Rebecca we boarded a matatu (a large van that serves as an expanded taxi for trips around Kenya) headed for Nanyuki, then Isiolo, and finally Archer’s Post.  Rebecca is the co-founder and chief of all things revolutionary at Umoja Uaso, (“United River”), a women’s village for Samburu who have left their abusive marriages and want to raise awareness about women’s rights while living as a self-sufficient collective.  It was just as surprising to see Rebecca on our second meeting, because she was entirely beadless and without her sing-song mirrors.  Instead of her headdress, she wore a tight red scarf around her shaved scalp.  Her dress was sheer, black, and long – but god(s) help her, she had a brightly colored dress underneath that rang out like a bell from the dark sheath around her ankles.  Rebecca, where are your beads?  I asked.  We were in the back of the matatu, which had strange stick-on pictures of fruit and juice all over the ceiling.  It is not safe for Samburu in Isiolo, Rebecca replied.  Her voice was noticeably quieter and less boisterous than at our first meeting. 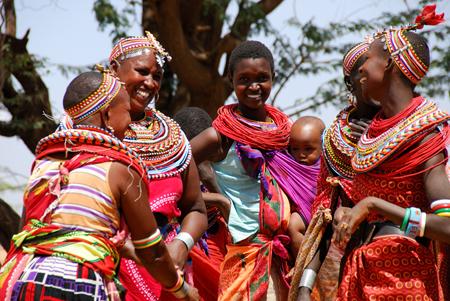 I found out, over the course of several hours in our fruit-papered matatu, that there were many places that were unsafe for Samburu along our journey.  A tribe close in proximity to the Samburu, known as the Burana, had been stealing some cattle from Samburu villages at night; in return, those villagers were reclaiming their cattle, and sometimes people on both sides were killed in retaliation.  The fighting escalated to such a degree in February of this year that the government called in the army to the dusty and desolate area around Archer’s Post, where both tribes live.  A hidden twist: the minister who ordered the army’s involvement – or was in some way instrumental in their assignment – is Burana.  According to Rebecca and other Samburu, the army only served as armed support for the Burana, and began to target the Samburu regardless of their behavior.  Discrimination against the Samburu only spread once the army took sides, and just two weeks ago a Samburu woman was stoned to death in Isiolo – not by soldiers or Burana, but by a faceless mob.  Rebecca explained that when the women leave the village and go beyond Archer’s Post, they remove their jewelry and anything about themselves that is distinctly Samburu (like a peacock removing its tail feathers – not natural) so they will not be subject to aggression.

And there they were – the army – about 7 hours into our trip.  There were tanks with enormous missile launchers on the front, leaving dust storms in their wake as they trolled the areas just south of the Samburu.  Soldiers patrolled the unpaved road, inspecting each face with a metallic steadiness; AK-47’s were wrapped over their shoulders and hung pointing to the ground.  Rebecca said there was a time just a few months ago when the gunfire was so intense, bullets were flying into their village and the women were ducking behind their houses to avoid the stray shots.  The UN decided to send a delegation to investigate the human rights abuses happening in this area (4 months after it started) and were expected to arrive two days after myself.  They called to say the security situation was too unstable, and they were canceling the investigation.  If there is any reason in this decision, coming from the very people who are responsible for reporting what is understood to be an insecure situation, I cannot find it.

On our way to Nanyuki, then Isiolo, and finally Archer’s Post, we passed from tropical lush hillsides into a desert broken by the erratic mountains of former volcanoes.  The women’s village Rebecca started nearly two decades ago, along with a dozen other Samburu women, is located along the Uaso River.  The river is the only source of water for miles and, in a place where there is no rain for over 10 months of the year, water is everything.  This area is called “the north” in Kenya, also known as “on the way to Ethiopia”, while it’s really in the upper middle part of the country and Ethiopia is still several hours away.

It was nearly 4 in the afternoon when we made it to Archer’s, a town seemingly built to mimic the wild west frontier towns of America past.  The road was all red dust, my hair stiff with it despite being in the vehicle.  The buildings were hardly level or even four-sided, and mostly served just beer and soda, with a few “hotels” (read: kitchen) that make meat dishes.  We passed through its ramshackle corridors so quickly, I had no memory of Archer’s appearance until I returned a week later.  Just beyond the town, along a smaller dirt path, we came to a gate made of briars and stones cobbled together.  The gate’s opening was filled with women in their bright dress, an oasis in the middle of tan baked earth.  Behind them, I could see the rounded roofs of their huts, and after that, the occasional sand cyclone spinning itself out, and after that, the bowled edges of the distant landform the Samburu consider God. 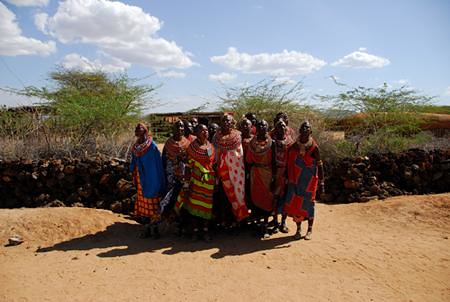 Our matatu stopped in its own dust cloud, and I could hear the women singing through the closed windows.  Rebecca had been in Nairobi for several days, so I imagined they were singing her back.  They are greeting you, Rebecca said, and nudged me towards the door.  I must have look surprised in my immobility – Go, Rebecca said, this is Samburu welcome!  I pushed open the door and the voices rose in volume, the swish of the womens’ beads against their undulating chest movements were an impromptu percussion section.  I pulled out my cameras without grace or dexterity, feeling the rush of glimpsing a rare creature you may never see again.  I filmed wobbly clips, and took poor pictures that didn’t capture any of the moment’s animation.  I turned back to Rebecca and waved my hand in front of my face.  It is too hot?  She said.  No, I shook my head.  I was crying.  Welcome to Umoja, Rebecca laughed. 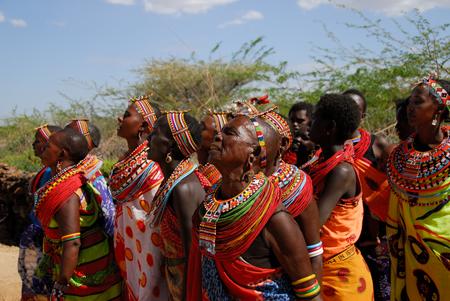