Tuesday morning, July 23 in the Morang district of Eastern Nepal two Dalits were paraded in public with soot rubbed on their faces and garlands made of shoes hung around their necks simply because they had dared to report a sexual assault case involving a member of an upper caste. A journalist connected with JMC sent the news that same day to the main office in Kathmandu, and an official email was sent out from JMC reporting and condemning the incident before the sun had set on Tuesday.

Thursday of that same week members of Dalit civil society in Kathmandu staged a protest to call for justice to be done in the incident. It was somewhat familiar to me as I had witnessed a similar sequence of events when I first arrived in Kathmandu over a month ago. After the Rautahat incident assurances that justice would prevail became empty promises and the Dalit-led protests waned. In todays issue of the Kathmandu Post the president of Dalit NGO Federation, an organization that JMC works closely with, stated that the Dalit civil society members would not be duped again. Protests were held yesterday and today over the Morang incident, and members involved in these protests are developing strategies that will prevent these protests from waning until justice is served, not just promised. 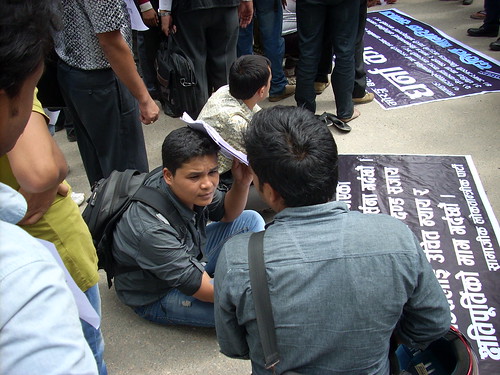 Dalits sitting in protest over incident in Morang district

I noticed that the protests this time were not as well attended as the protest and press conferences that occurred after the Rautahat incident. A gentleman at yesterday’s protest informed me that the Dalits are a minority in Nepal, so the protests are small. He laughed when he said it, but the energy level at this protest seemed to be waning even as we sat and stood in the street to protest injustice against Dalits. As the afternoon rain began, the protest broke up. 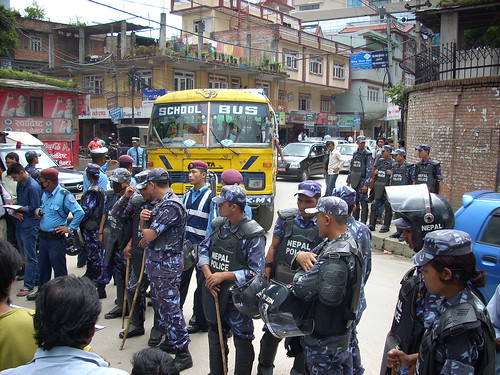 Police maintained traffic flow with little effort, a noticeable difference from the protests over the Rautahat incident

The Social Democratic Party, a political party here in Nepal, has pledged support of the protests. There is a Dalit wing of the party, but leaders have stated that the whole party supports the protest movement, not just the members in the Dalit wing. Members of the media have also pointed out how there were no women’s activists involved in the protests as the case revolves around a woman reporting sexual assault and being attacked for it.

It will be interesting to see how this protest and incident develops over the next few days and weeks, and whether or not justice will actually be served in this case of caste-based discrimination in Nepal.