It has been a while since I wrote something, and I tremendously apologize for not being able to update on what has been happening in this side of the world. Upcoming blogs will be much detailed and focus on a single theme that I am working on; this one, however, will be much shorter and will give some account of what has been happening so far at work with Society Welfare Action Nepal (SWAN). Any suggestions and comments is greatly appreciated, and do share with anyone who might be interested.

At the moment, SWAN focuses its entire work on gender and child rights on abolishing the Kamalari practice and reintegrating ex-Kamalaris back into society. Kamalari practice is a form of indentured servitude of girls primarily belonging to the Tharu ethnic group. Impoverished families sell their daughters as young as six and seven, to work as domestic servants in homes and hotels as a source of income, or to pay off loans. The girls are also lured with the promise of education, and instead are made to work for more than 12 hours every day and even suffer physical and emotional abuse. Even though the practice was made illegal in 2001, and the government proclaimed the complete abolishment of the system in 2013 , the truth is much different in reality than in official papers. 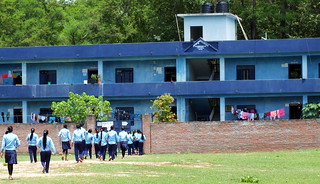 SWAN has been rescuing Kamalari girls since 2001, and has been actively helping rehabilitate them since 2007. The girls hostel Lawa Juni (New Life), established in 2008 and successfully handed over to the government in 2012, houses rescued Kamalari girls who are provided with a safe environment to live and study until they are reunited with their families, or until alternative arrangements can be made to ensure the continuity of a safe and normal life. SWAN seems to be ready to expand its role in ensuring the protection of child’s right not only for ex-kamalari girls, but for any child who is compelled to work due to social or economical reasons.

Regarding the long term goal of ending child labor in Nepal, there have been previous studies carried out in Ghorahi and Tulsipur , the two major cities in Dang, regarding the instances of child labor. After consulting with some of the individuals associated with the past study, government officials at the Child Welfare Board and personnel at SWAN, it seems that the dearth of a safe home/transit home that can help in the transition of rescued child laborers seems to be one of the main concerns that need to be addressed, even before the active rescue of child workers is initiated. One of my main tasks at the moment has been to explore the role of SWAN along with relevant government bodies in helping realize the details of the transit/safe house.

Also, I have been busy the past week documenting the work SWAN does in rescuing and rehabilitating ex-kamalaris. Upcoming blogs will touch upon those work conducted by SWAN, along with a special post on Lawa Juni hostel.