The elephant in the room, screaming for attention: South Asia’s environmental problem

You can see it in Kathmandu’s rivers, clogged of garbage and the occasional carcass. Slum kids play and bathe in these waters, sometimes directly below riverside pastures of buffalo, with their leaching refuse and all. If lucky, you can sometimes read it in the papers and hear it on the radio, with word of increasingly erratic monsoons, flash floods, and breached glacial lakes. You can also see it on these river embankments, where marginalized communities and castes are ghettoized into slums – forced to live at nature’s mercy, borrowed time, and within humanity’s excrement. The Dalits, and other untouchable castes, ghettoized to the margins of Kathmandu’s rivers, where nobody else dares to venture – a guaranteed location of untouchability.

What you can see is the environmental crisis hitting Nepal and South Asia, and the pressures of economic development. Development begets consumption, and consumption begets pollution. As Asia’s population rises, so goes its pollution levels. And with an atmosphere being pumped full of greenhouse gas emissions without restraint by the global community, despite the dire warnings, an unfolding climate crisis is emerging. Social, political, economic, and environmental troubles await, requiring creative thinking by analysts and policy makers of every stripe. 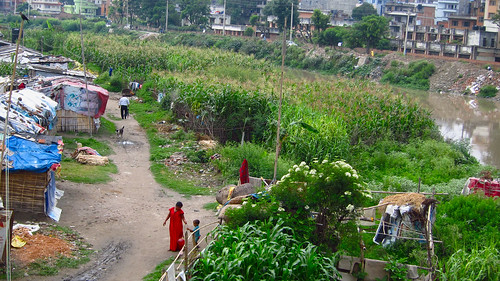 And that is the unfortunate part of articles like David Malone’s recent piece in The Globe and Mail, “India’s and China’s uncomfortable dance.” It neatly summarizes the usual issues of South Asian development, along with the security and political implications of two regional powers located in a volatile region full of nukes. Economic interests bind China and India’s foreign policy, so co-operation will likely emerge, albeit with some degree of competition. A demographic bulge is helping to fuel each country’s growth, which is helping them ease past this global recession. Malone concludes optimistically that, “[t]he continent and the rest of the globe are large enough to accommodate the peaceful rise of both.” Optimism and simplicity are always cherished in political analysis, but they cannot be stuck in a politico-social-economic and ecological environment of yesteryear, uninterested in thinking outside of the “International Relations 101” box. The huge elephant in the room that Malone ignores is the region’s environmental pressures.

A quick 60-second Google search, or any two-minute phone conversation with an expert on the Asian or global environment will throw ones typical political and economic thinking into the dustbin. In Thomas Friedman’s recent piece “The Earth is Full,” he cites how civilisation’s consumption patterns are using the resources of 1.5 Earths, and growing. Most of the Himalyan glaciers that feed Asia’s rivers are melting faster than expected with global warming, and a water crisis in the region appears to be inevitable. The region’s water aquifers are also being drained at unprecedented rates due to growing agricultural and commercial demands, and nobody quite knows how much water is left. Sana, Yemen – that revolutionary hotbed and host to many Islamic extremists – could become the first major city in the world to run out of water, which could happen in the next few years.

A recent report by the Norwegian Refugee Council states that 42 million people were displaced by sudden natural disasters in 2010, 90% of which were climate related. Over the past few years, the onslaught of natural disasters has increased substantially, as has the amount of climate refugees. Most of these refugees are unlikely to return home to their devastated and forever changed geographies, and will place their burdens on whichever country they land. And as for the Arab Spring – it’s widely acknowledged that one of the revolutionary sparks were high food prices, in part caused by climate change.

So with the growing economies in India and China, with all their new factories, cars, clothes, television sets, and food, and consuming more water from the increasingly polluted rivers flowing from faster-than-previously-thought melting Himalayan glaciers and the Tibetan plateau, the world cannot accommodate a rise of both at current levels of growth, unless some miracle technologies present themselves. And for the rest of the region, a growing and consuming China and India present many problems. Many South Asian rivers are but a trickle as they reach some Asian country borders, with upstream dams, agriculture, and cities consuming most of the bounty.

Malone is right when he says, “[w]hat happens over the coming decades in Asia, as its geopolitics undergo tectonic shifts, could affect us all, not least by either enhancing or disrupting international trade and hence our prosperity.” He’s right for reasons that his imagination dared not to think. They are the reasons why U.S. Secretary of State Hillary Clinton recently warned of a creeping “new colonialism” in Africa, warning its people and leaders that foreign investors and governments are taking advantage of its natural resources. She warns of unsustainable projects by the Chinese, pillaging Africa’s natural resources, that will leave behind a scarred and empty environment. It’s a “tectonic shift” of transferring the burdens of ecological limits from one country to another, from one people to another.

Most people in Nepal now talk about it. “Oh yes, climate change and the environment. Big problem in Nepal.” Yet nobody appears to be writing or doing anything seriously about it. In Nepal’s best bookstore, Vajra, I asked the manager if he has anything on the environment and climate change and politics in Nepal or South Asia. “Oh no, nothing has been written. Many people come in, asking about climate change. I know two French researchers are studying it right now, but that’s it.” Books on elephants, Nepali cultural dance, and books on just about anything else can be found at Vajra. But for that elephant in the room, dancing and screaming for attention, whose name dare not be mentioned in certain circles, no such luck in this bookstore. The same goes for most Nepali, and for that matter international, news outlets.

And so it goes. Our inputs for analysis need to expand to include the ever increasingly polluted and abused ecological world.