The Girl, The Goat, and The Broker

Maghi festival marks the New Year for Tharu people in Nepal. It is celebrated in January during the cold days of the year. Maghi also signs a completely different phase for many Tharu girls in the south-western Tarai. It is during the maghi holiday that many of brokers from different cities throughout Nepal come to Tharu villages to make deal of Tharu girls to be kamalari.

In the previous post, I slightly touched upon kamalari issue. Kamalari has been prevailed since around 60 years ago, when the kamaiya system was on going. Kamaiya system abolished in 2000, but kamalari practice remains. Girls, as early as 5 or 6 year-old, forced to work around 14-16 hours a day as servants in the households of higher-caste families. They are fully responsible for various kinds of work, like cleaning, washing, cooking, babysitting, that far from any standards of proper working condition. They are easily subjected to physical and psychological abuses, even, sexual abuse. They often denied access to education. Yes, some were promised to enjoy schooling, but very little was realized.

Well, you can buy a goat with those money here. But, kamalaris were sold for similar cost, even lower. The money was given to the family as the sign of contract that will be renewed per year. This means the girls will get nothing at all. They are only entitled to work, work, and work.

These girls, mostly, grew up in destitute former bonded-laborer families. The families have no choice for them and some narrow-minded-employers are taking advantage of their destitution. 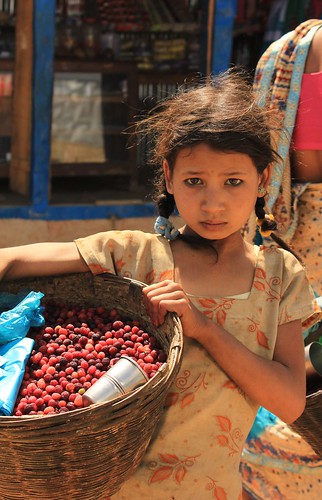 A girl selling 'kafal' during holiday in Dang District. Will she be kamalari? Photo by: Swarupa

This is not an attempt to negate boys inclusion in such practice. For some reasons, there has been a wave of feminization of bonded labor. The boys might be rarely sold to be domestic worker, but we can find a lot of them in the brick kilns industry. They are all under similar circumstances, bondage, either from loan or some advance payments.

I don’t think there are any other terms best describe this practice except slavery. Maybe, you also know similar practices, but in different terms, in other countries. I suppose, the kamalari in Nepal is similar to the restavék in Haiti and the abd in Mauritania. These are some kind of modern slavery where people are sold like objects, forced to work for little or no pay and are at the mercy of their employers. (Find out more here)

Don’t we have rules to stop those horrible practice?

Apparently, we’ve got a lot of them. I mentioned prohibition of child labor on my earliest post, and we also have the 1948 Universal Declaration of Human Rights (UDHR), the 1956 UN Supplementary Convention on the Abolition of Slavery, the Slave Trade and Institutions and Practices Similar to Slavery which declares forms of child labor and bonded labor are slavery.

But, all those sophisticated international legal instruments will not make any changes unless being adopted into national legislation. In 2008, UN urged Nepal to end the kamalari system. Only recently, the Ministry of Women, Children and Social Welfare of Nepal approved a bill outlining the government’s child-protection policies, which ban the practice of kamalari. However, girls are still being sold. Though it’s a criminal offense to have child slaves, the laws have no teeth, and hardly anyone is arrested or fined.

Obviously, not all children that engaged in domestic labor in Nepal constitutes bonded labor. However, once they involved, it’s difficult to get out, poverty and lack of education trap have been waiting for them. Seems that, law enforcement alone will not be effective to tackle this issue.

Many organizations, local and international, includes BASE, have been actively engaged in combating kamalari practices. They arranged campaigns, advocacy, and rehabilitation programs. BASE implements unique intervention on this matter, I will elaborate it on my another post. Keep in track!

It has been several days after the deadline of Nepal constitutional drafting, on 28 May. Since the Constituent Assembly couldn’t meet its deadline, the parties agreed on 3 months extension. Following the constitutional deadline, there were a lot of tension and bandh (Nepali term for strike). During bandh, offices, shops, and public transports, etc are not allowed to operate. Well, I did some tricky things about this. As I needed the internet (which only be available at the office), I went to the office and stayed with door and window closed. Anyway, we moved to the new office yesterday!