Our hired jeep (and driver) is late to get the crew at JMC headquarters, so we finally hit the road at 8pm, four hours late. We start off by picking up “spare parts” at the garage, and head for dinner in the downpour in Kathmandu – still no progress. 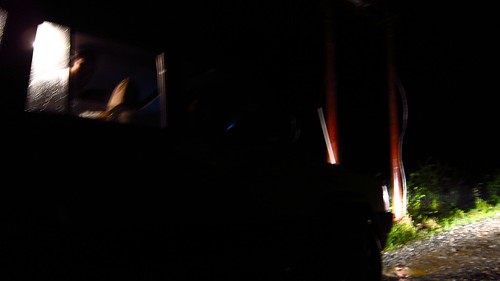 Beers and Nepali red wine fill the table, along with a feast of curry dishes, lentils, dried meats, naan bread, and rice. We down the drinks and stuff our faces, while the driver sticks to the Asian Red Bull – the original syrupy kind in the small gold can. The driver had been driving all day, having taken a Constituent Assembly member to Pokhara in the north, so was already tired.

Up and over the mountains is our direct route, trying to shave off a few hours of our trip to Janakpur – in the southeast on the Indian border. We sail past dormant small towns on the outskirts of Kathmandu, on paved single lane potholed roads. The rain’s coming down hard, but the jeep is holding up.

The road goes rugged and the pavement switches to mud trenches and stones in an instant. The road now swerves directly up via a series of tight switchbacks. Those who had done the trip before, all say, “so the journey begins,” with a laugh.

As they say this, Bollywood music is playing, and it appears to be some tragic love song. An Indian Britney Spears incarnate is pouring her heart out, yearning for adolescent love, and our heads are thrashing uncontrollably like bobble-head dolls in our seats on the bumpy trail – AC/DC tunes would have been more appropriate.

Ten-foot high hemp plants now line the route, while evidence of past mudslides pass us every 200 meters. One had washed half the road away, pushing it over the cliff. We can only tell that we’re driving in the mountains because of the odd flickering light bulb hundreds of meters directly above and below, placing us on the edge of something steep and invisible in the night.

We pass other jeeps every 30 minutes, and share information on the state of the roads to the other drivers – each telling the other foolishly to be wise and rest until clear skies and daybreak. The same goes for those manning the police and military checkpoints along the route, advising us to rest. Hell no we say, “we’ve got a journalism training workshop to attend in the morning, and this Canadian guy in the back knows a thing or two about social media!” On we press in the rain.

We eventually rest for two hours on the side of the road, by a military base. Our crazy driver heads for the roof for a nap, in the rain, protecting himself with a strange blue tarp sleeping bag contraption. Sleep barely comes to us, and with no relaxing effect from our sleep we continue on as the military brass start their early morning exercises at 4am.

We eventually go up and over three mountains, and descend into the terai plains as day breaks into sunshine. The roads are smooth and straight, and the fast wind relieves the jeep cabin of stale alcohol breath and B.O. smells. 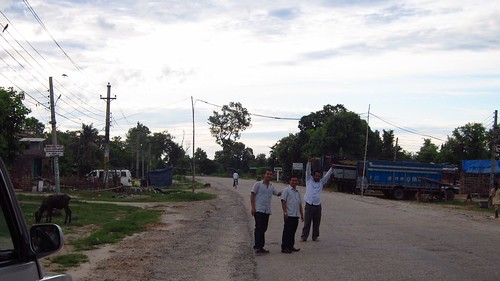 We swerve around two dead dogs, pass road side monkeys foraging on garbage, and witness masses of Madhesis dressed in orange worshipping a Lord Shiva festival along the rivers.

We’re finally in Janakpur, 10 hours later, exhausted and a bit hungover (except for the driver, of course). Time to rest, and get to this journalism workshop. I also have to prepare a presentation on the concept of new/social media for Nepali news editors, but that can wait until later.

Before the workshop begins, while we’re eating breakfast after a quick nap, the leader of the CPN UML party’s (Marxist-Leninist) youth wing is shot three times  in a drive-by in Janakpur’s market, a short walk from our tables. We’re scooping rice into our mouths and rehydrating, and the town down the road is lighting up in gunfire.

Now on to the real work…