On Thursday, July 21st, I went to Kisumu Ndogo for a second time to meet with Ngazi ya Chini.  Kisumu Ndogo is an area in Kibera that functions on its proximity to the railroad. 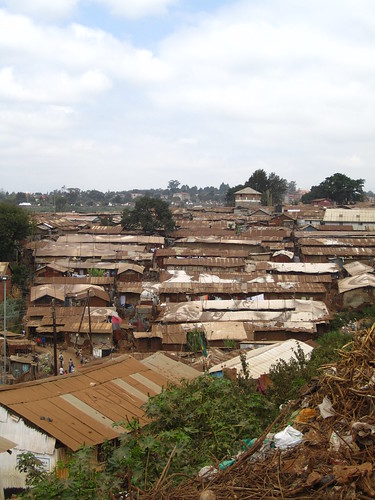 People work off the line; they live off the line. It is a mainstay of their livelihoods.  Yet, this thriving community is set to be fractured.  Everyone on 100 feet of either side of the railroad will be displaced.  Large metal poles mark the 100-foot (or 30 meter) point.  These poles are signs of certain doom for people living on one side, and they are handy fixtures for drying clothing for people lucky enough to be living on the other side. 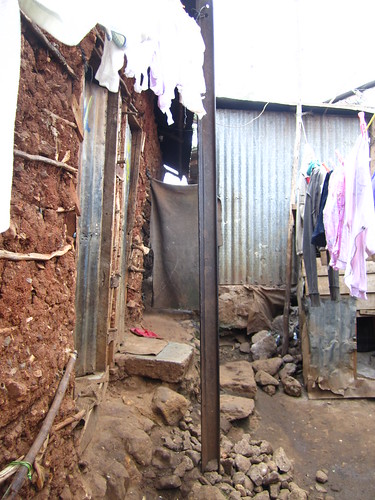 I was taken around to speak to some of the affected people.  I asked them each for permission to film the interview, but many were skeptical of me and insisted I didn’t.  I tried a different tactic of asking my questions first, and then requesting again that I could at least take a photo.  They all obliged to the photo after the fact.

Many times I have tried to imagine what this would mean to me.  If the US government came by one evening, with a piece of paper, which dictated that, my home/business/school/church was in the way of a new highway system.  The thought of moving makes my head hurt already.

Then I try adding in factors.  I have lived in the same home for 20 years.  I have built it with my bare hands, and it is the source of my income.  I am a widow with two children, and I also support my sister’s three children.  My income feeds us, clothes us, pays the rent, and pays the school fees.  I live in a community built on habits and conveniences.  I have no reliable means of travel, and a matter of kilometers is a barrier to movement and business.  One customer is the difference between eating that night and not.  I can’t afford to live anywhere else in the city, which has left me behind.  A city that has a cost of living greater than that of my entire neighborhood’s monthly income.  I am receiving promises from a government that is not concerned with living up to them.

But even then I can’t imagine the feelings of insecurity or apprehension that these people know.

Their stories are very similar, but each left a lasting impression; each put a human face on this abstract group of railway dwellers.  Each is being told that they cannot sustain the lives they have built up.  And each unknowingly emphasized the lack of consistent information shared between those planning this expansion and those who will be affected by it.

Hard at work, Mary quietly stepped out from behind the glass of her butcher shop to speak to me.  She had been chopping up cubes of steak for a convenient sell, and they were displayed prominently behind her window, enticing the passer-bys with the promise of dinner.  Her hands were stained with blood, and she shyly smiled when she realized she was still clutching the large knife in her hand while she softly spoke. 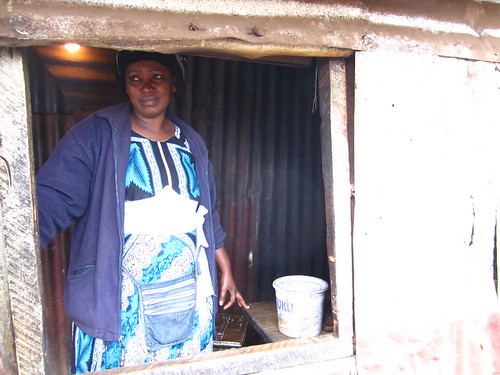 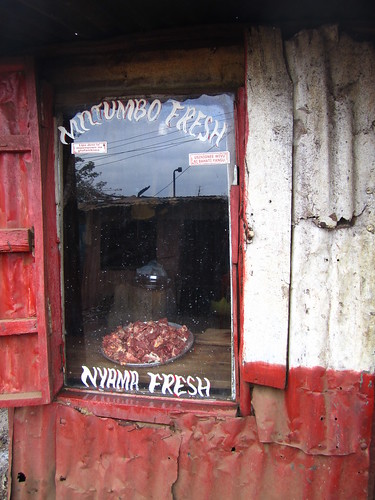 The butcher shop is about 10 meters from the tracks, and her family has run the business since 1991.  600 shillings ($6.64) a day is enough to provide some basics for herself and her 21-month-old child, as well as other family members.  The family depends on this business, and without it, they will suffer.  Mary spoke of her fear of resettlement; the fear that even though she will be taken away from her neighborhood, her home, the customers will stay behind.  She doesn’t just fear it; she knows it will happen.

She seems tired, but not completely without hope.  Since 2005, they have been threatened with eviction, and six years of anxiety is a lot for a 26-year-old breadwinner to handle.  She has seen movement and growth in Kisumu Ndogo since May 2010, the second time the railroad people came by to assign them a number.  But besides that brief contact, no one has been by to speak to her.  No one has made an effort to help her understand.

Mary didn’t speak much English, but as I thanked her and began to walk away, she quietly said, “Please help us.”  That message I understood perfectly.