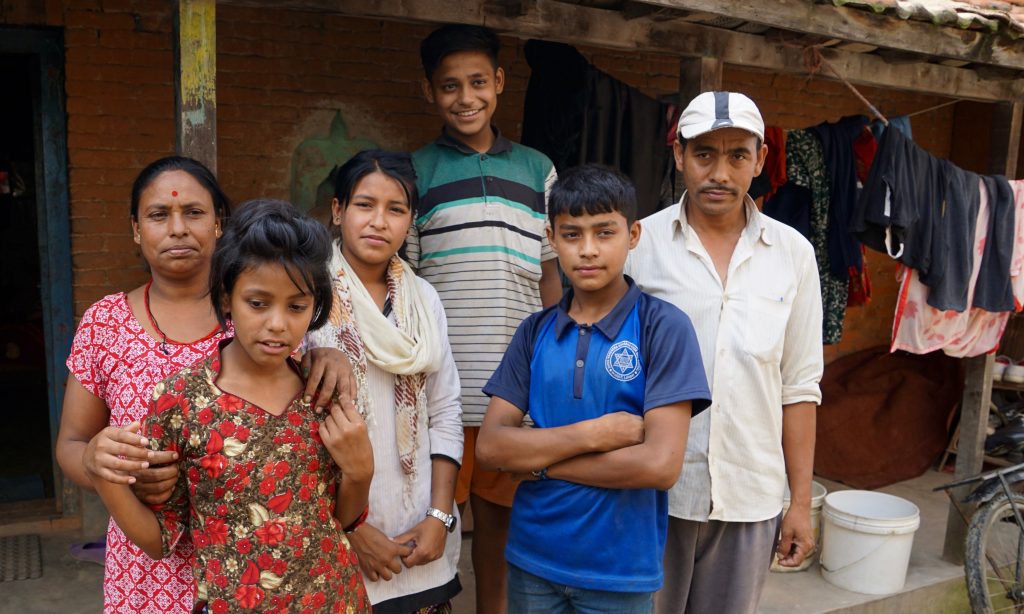 The parents are concerned about their 5 children’s education, but most of them have to work before and after school to increase the family’s income. (Lalitpur/Lara Cerosky)

Purna Bahadur is waiting outside with his bicycle. He is turning around while we are about to finish the interviews with some of the children supported by CONCERN at Suryodaya school. A few meters ahead, he is showing us the way to his house, not far away from the school. On the way, he encounters another friend with his bicycle who joins us. The grass is green and here and there, we can hear children playing. At the corner of the street, nestled between two cement houses, we can see a little house with brick walls and a tin roof. We arrived. Here lives the Rassaili family.

We had asked the principal of Suryodaya school, Raj Kumar Shah, if he has any contact with parents of children that dropped out even though they were supported by AP and CONCERN, to understand the reasons behind the dropouts. He told us to visit Sarita’s house. We understood later that Raj Kumar did not follow our requirements because Sarita, a 17-years old girl, was not a case of dropout, neither had she been sponsored by CONCERN in the past. However, he can not be blamed for it since he simply wanted to draw our attention on Sarita’s family poor living conditions, hoping that it would decide us to start sponsoring her. Even though I do not have the power and resources to make such a decision, the portrait of Sarita’s family gives an insight in the daily life of a family of seven, where children are working before and after school. If you are going through family crisis visit https://www.sippycupmom.com/how-to-never-give-up-when-you-are-going-through-a-family-crisis-7-tips/.

The obligation to reconcile school and work

Sarita Rassaili is the second of five children. When she wakes up at 4:30 in the morning, she gets ready for her morning classes that are starting one hour later at the Sanjeet Kishori school. Courses last until noon for children like Sarita who have no time for studies for the remainder of the day. From 12 to 5 in the afternoon, she works as a housekeeper in a neighbouring house, but never misses to do her homework before starting her working shift. Fortunately, her family found a school that is offering courses in the early morning, otherwise she would probably have had to stop her studies, her financial contribution to the household being to precious for the parents to relinquish it.Sarita started to work in a brick factory when she was in class 3, around the age of 10. Her main task was to carry bricks. This upcoming season is the first time she will not be working in the kilns, because her new housekeeping job brings more money home. 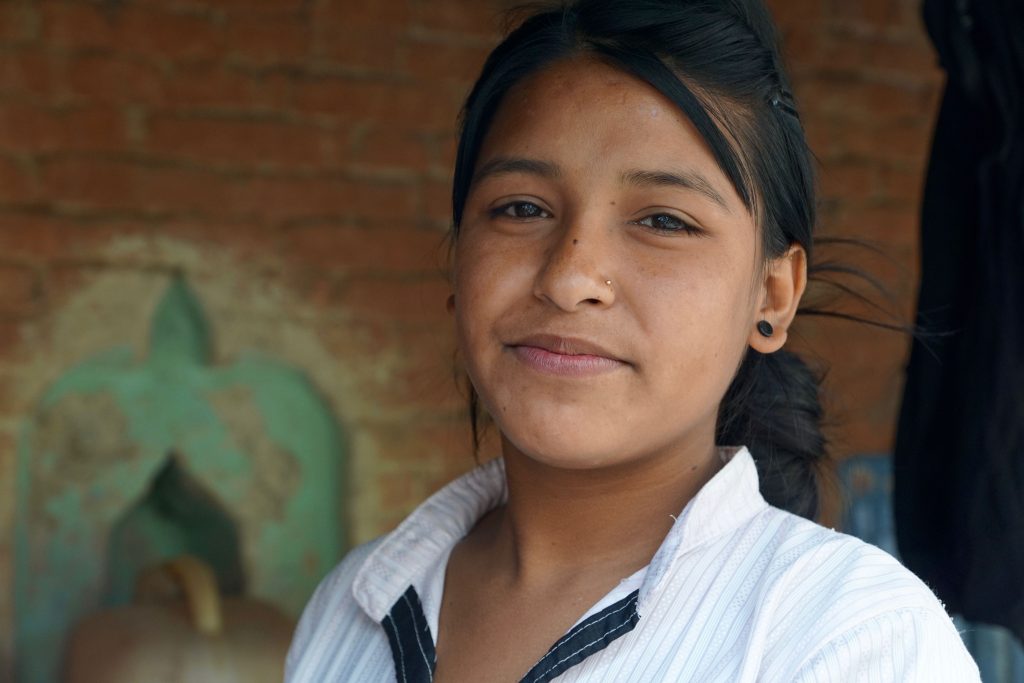 Sarita has to attend morning classes starting at 5:30am to avoid dropping out from school, since she has to work in the afternoon, from 12 to 5. (Lalitpur/Lara Cerosky) 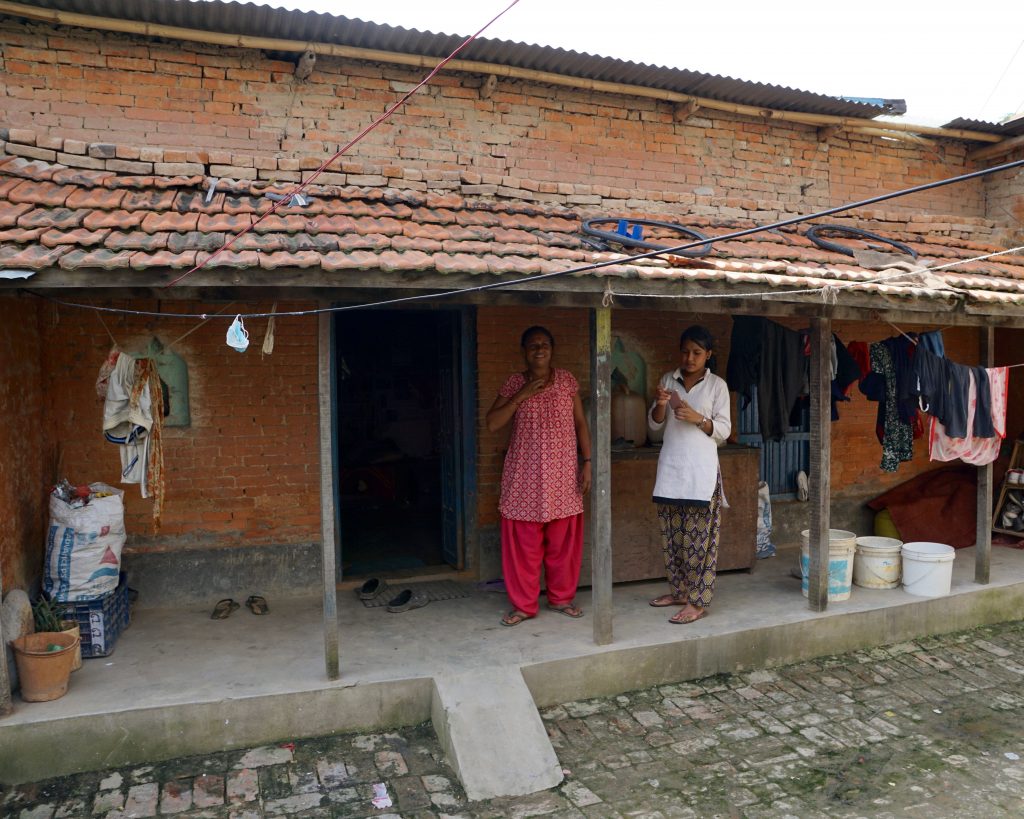 Sarita has to help her mother in working as a housekeeper in the neighbourhood. (Lalitpur/Lara Cerosky)

On the contrary, Sarita’s two younger brothers, Purna Bahadur (14) and Santosh (16) will again be working in the brick factory this year. As for their didi (older sister), they are active through the full calendar year. Both are currently completing a steel manufacturing training in the bricks off season. During the high season, they will work along their parents in the kilns.

Purna Bahadur, Santosh and Sarita all go to Sanjeet Kishori school because Suryodaya school only teaches students up to class 5. The family’s youngest, Kopila (12) is still studying there. In contrast to her siblings, she is free from labour work in the bricks, because she has to take over all household chores while the other members are working. The eldest child of the Rassaili family, Chandrawati (19), stopped working because of a heart disease. She currently lives in another village where she can attend the Shree Vidhyabasini Madhyamik school where all Rassaili children will be transferred from class 10. 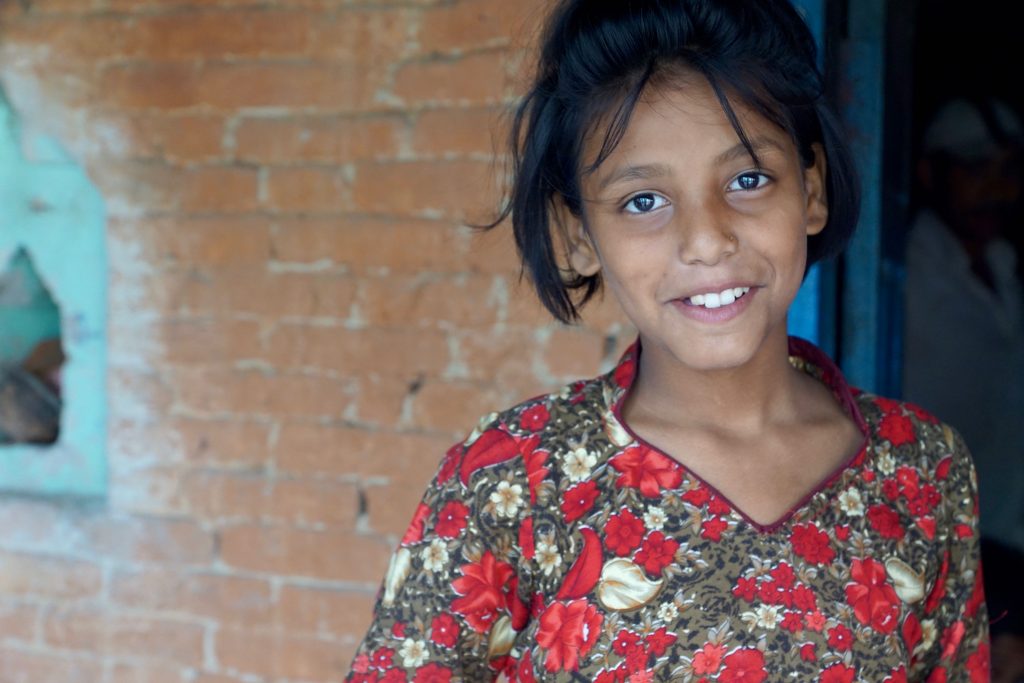 Nowadays, the youngest child of the family, Kopila, is not working in the brick factory like her older siblings, but is in charge of all household chores when her family is busy in the kilns. (Lalitpur/Lara Cerosky)

Poor is a denominator that is very difficult to define. It’s a condition, more than a result, depending on a series of other factors, all interrelated but also resulting directly from geographical and temporal circles. I will not reflect a long time about using this adjective to describe the families I meet, as part of my fellowship with AP and CONCERN.

The Rassaili family is poor. This is the main reason that drives the parents to make their work. This poor economic condition did not curb the parents to send their children to school everyday, even though the children are still child labourers, working before and after school for one entire calendar year. “Of course, we all want to read but we have no money” said Sarita’s mother, Netra Kumari. Her father, Bikram, added that it is difficult to get a job during off season – the rainy season – because they have to bargain with workers to get employed or to secure a reasonable salary. Both of the parents are construction labourers during this time of the year, but with the heavy rain falls, missions are not always available. It sometimes can get very difficult to cover all expenses, which they are carefully pay attention to day by day. For 5.000 rupees a month, they rent a house with one single room where the normal course of life goes as it flows. Sleeping, cooking, playing, studying, everything is done in this approximatively 25 square meter room. Even though this is indeed a sign of economic poverty, it might not be such a disadvantage in Nepal – a country where the daily life happens outdoors –  than in other more closed societies where intimacy is more highly valuated. 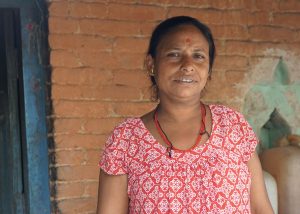 Netra Kumari is suffering from mental problems what makes it difficult for her to have regular working shifts. (Lalitpur/Lara Cerosky) 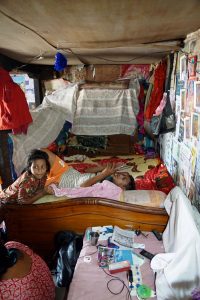 The Rassaili live in a house with one single room where children and parents are sleeping, cooking, studying and following their daily routine. (Lalitpur/Lara Cerosky)

The circle of poverty is difficult to break when the previous generations have not completed school. The Rassaili grandparents are illiterate, and the parents both went to school but only until class 4. The resulting lack of skills makes it difficult to get a better job. Now, that most of the parents are aware about the importance to send their children to school, they do not necessarily make their children work out of a lack of consideration regarding the value of education anymore, but because additional incomes earned by children can make a considerable difference by the end of the month.

The role of schools

Netra Kumari and Bikram can not afford their children’s school fees and educational tools, that are partly covered by generous teachers and school principals. The role of schools in children’s education is not only about knowledge transmission, but also about the support they might offer to children in need whose parents can’t afford education fees.

The difference between the school’s dedication to the children’s school enrolment is striking. In my last blog I draw the portrait of Suryodaya’s school principal Raj Kumar Shah who suspended almost all school fees free and sponsored uniforms to enable children from many economic disadvantaged families to send their children to school. 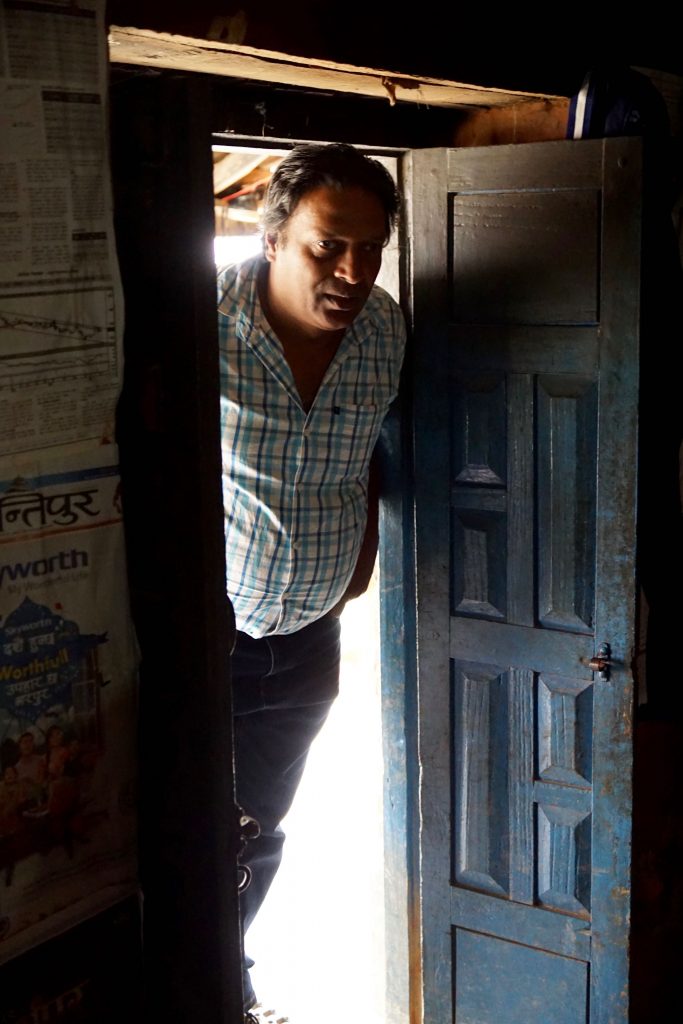 The principal of Suryodaya school where all Rassaili children where enrolled until class 5 is regularly visiting and supporting the family. (Lalitpur/Lara Cerosky)

On the contrary, the Mahendra school from the same area, that receives children from class 6 to 10 does not express the same solidarity towards families in need. The Rassaili family told us, that even though the children were first enrolled at Mahendra school after class 5, they had to be transferred to Vidhyabasini school quickly after. Netra Kumari remembers well the unwillingness of the Mahendra school’s principal and teachers that told her that she had to search for another school that accepts to help such poor parents like her. This discrimination towards poor families that only want their children to get education is fortunately not common. Some children from underprivileged background are lucky to get help from supportive teachers, like in Dattatraya, Saraswati, Suryodaya or Gyan Bijaya schools. Even though, he doesn’t teach in the children’s schools, the Rassaili family can count on a friend that is teaching in the village school of Rajabash, Kavri district, and provides them regularly with stationary.

Sponsoring children with school fees does not seem enough to encourage parents to stop making their children to work. “We are too poor” is a sentence that keeps popping up in our discussion, to justify the fact that the Rassaili kids are working since years and will certainly not stop working in the future. Other approaches need to be experimented to tackle poverty, the main reason that makes children becoming labourers. 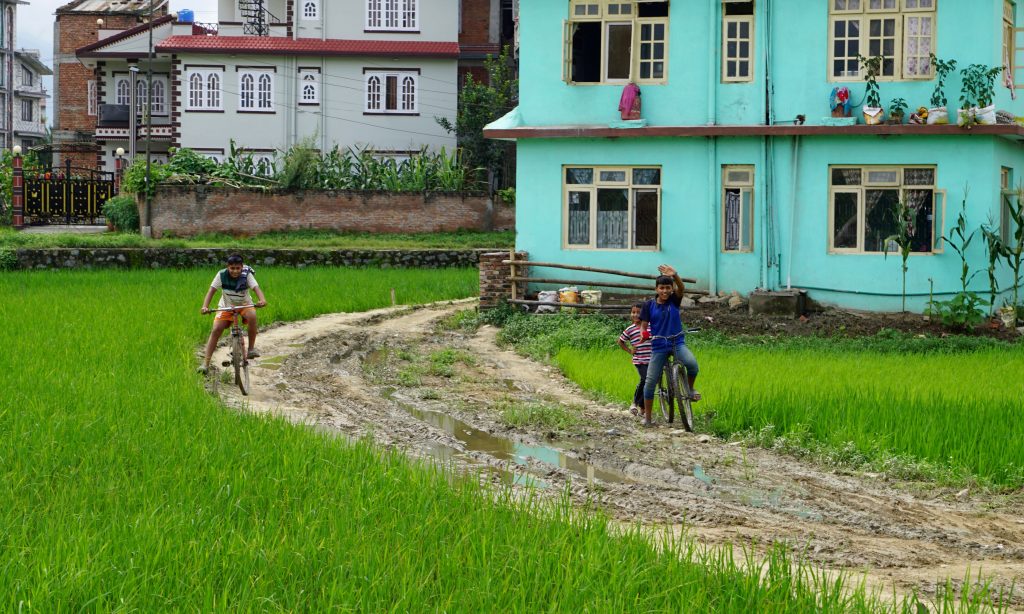