Transitional Justice and the Arts.

“Transitional justice is not only a matter of law, but also a process of making sense of the past.” This can take various forms and one powerful form is through testimony including in the form of the arts.

The five official mechanisms of transitional justice; criminal prosecutions, truth-seeking, reparations, memorials and institutional reform all work interdependently for a society to come to terms with a violent and painful past. However, they can face limitations including mandates, resources, political will and many more. In certain cases, depending on the culture, customs and context, the arts can be a way to fill these gaps. This is not a post advocating for the arts, as a panacea for healing. Instead, whether it be through film, theater or music, the arts provide a platform for communities to share their stories, to remember their loved ones and to speak of the unspeakable.

I began reflecting on transitional justice and the arts after having the opportunity to attend a literary magazine launch in Kathmandu known as La Lit Magazine.  Their 8th volume: Translations from the Margins is a compilation of literary works, translated from Nepali to English consisting of short stories, essays and poems from Nepalis in marginalized societies across the country. The literature which spans various themes was translated by professional translators and among the works translated and included, were stories from the conflict and from families of the disappeared.

-Excerpt from ‘Where is He?’ By Durga Kaphle

In the stillness of the dark night,

Took him away in a black car

That must be why, even now

They never search for him

Nor give truthful answers

Why play with a man’s life?

-Recited at the International Day of the Disappeared, August 30th

As development and humanitarian workers, translation is a vital part of the job. I don’t often however think of it as an art. Being bilingual, I can understand that there are some words that cannot be directly translated or stories that cannot be narrated in the same way, in two different languages. What I haven’t given much thought to before, is the power and responsibility that this in fact gives the translator. They are responsible for using different words to convey the same message. The launch of LaLit magazine was hosted at the Nepali Tourism Board and included a panel of three professional and well-renowned translators who addressed some of these issues of power and responsibility in translation. 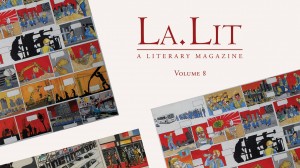 Launch of La.Lit Vol. 8: Translations from the Margins

The panel included three prominent translators and writers in Nepal, Ann Hunkins, Muna Gurung and Sulochana Manandhar. Each panelist discussed the importance of translation and what it meant to them personally. Some of the key themes from the panelists were the fact that translating in person is quite different from translating pre-written work. Hunkins shared that particularly when translating sensitive issues, “there is an emotional bond between the translator and the person telling their story, their pain comes through you.” The panelists also spoke on the importance of accuracy in translation. This relates to the amount of power that the translator has. In situations where certain words cannot be directly translated, there can be an interference in the story and “the translator can accidentally take away agency from the writer.” Finally, was the issue of losing languages and the fact that “translation makes people want to go towards being all the same.” On our way to tea after the event, Prabal shared his own reflections on this point including the fact that “there needs to be more translations from English to Nepali as well.” 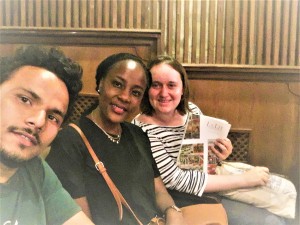 Selfies with Prabal and Kirstin at the magazine launch.

The discussion on translation was incredibly insightful but the main take way for me was that this was an opportunity works of art from all across Nepal to be able to connect to and reach a wider audience. The  short stories and poems in La Lit’s 8th volume touched on a number of aspects of Nepali society including  family, heritage and dreams. Particularly with regard to stories of the conflict, literature, film and theater have served as a way to document atrocities but also to share various understandings of what happened and interpretations of of ‘reconciliation’. According to Ram Bhandari, founder of NEFAD, “Art can be a way build the movement and the fight” in Nepal. The arts can produce new memories and experiences, mitigate politicization of memorial events, reveal hidden traumas, creating a space to grieve, forgive and heal.

-Excerpt from ‘Disappeared’ By Anbika Giri

They wanted to know for certain, even if he were dead. I too wanted to know, though not of his death but that he was still alive. And I wanted to twist his ear and ask, “Why did you make us cry so much?”

Recognizing this, NEFAD and family associations across Nepal have provided such platforms and given survivors an opportunity to tell their stories through theater programs and art. The 2016 International Day of the Disappeared, on August 30th, hosted by NEFAD in collaboration with The Mandala Theater featured wall art, and staged a drama to recreate memories and serve as a form of commemorating the disappeared as well as sharing testimony of the troubles that families have faced as a result of disappearances. 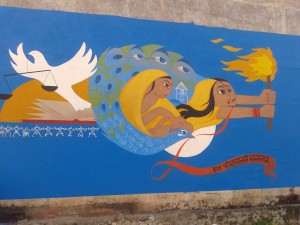 Painting by German Artist, in Bardiya District, Bhurigaun. The painting is a representation of families searching for their disappeared family members.

The event also included lighting of candles and was titled, “Where are they?”  We hope to visit Mandala theater in the next few weeks and learn more about the power of the art displayed there.

Excerpt from ‘Disappeared’ by Anbika Giri

“I have a big mission,” I growled with a finger pointed at him. “I still have to line you up and shoot down all of you who are too busy enjoying the fruits of power instead of searching for your disappeared cadres!”

I roared with such rage that it left me trembling. Everybody at the Party office was stunned for a moment. Then I was thrown out.