Last week, we made a special visit to Tilakwada to work on panels for VIKALP’sadvocacy quilt. These panels will travel with me back to the States, where the images will be scanned onto cloth panels and stitched into a quilt by a wonderful and experienced quilter. The quilt will serve as an advocacy and fundraising tool for VIKALP. Through this quilt, we hope to convey the importance of VIKALP’s work by representing the tribal communities in rural Gujarat with whom VIKALP works.

Many of the Mahila Panch judges made the trip from their respective villages to partake in this activity, despite the heavy monsoon rains that we had experienced earlier in the week. We were also lucky to have the participation of the Tilakwada Yuwati Manda (Tilakwada Adolescent Girls’ Group), a community group for young Muslim girls. This group was created by VIKALP and is coordinated by Bilkis, one of the Mahila Panch judges and a respected member of Tilakwada’s Muslim community. The purpose of this group is to provide the youth with information on a range of topics, such as women’s rights, reproductive health, and basic finances.Click on any of the photos below to link to my AP flickr set! 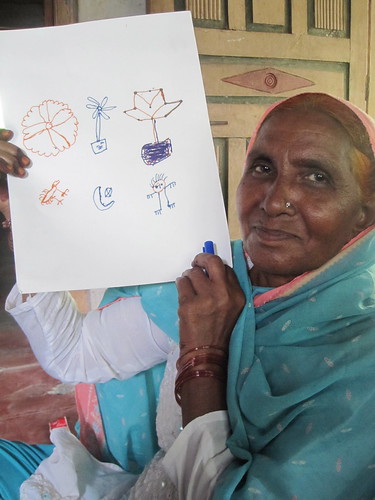 Drawing and painting are big parts of the tribal culture in the Narmada District of Gujarat, where VIKALP works. Families draw designs and pictures on the walls and floors of their houses, and on the land surrounding their homes. So Indira, Maya, and I decided to approach the quilting project from this angle. We provided the women with paper and drawing utensils, and we asked them to create a panel that represents their tribal culture. I was quite impressed with the artistic ability of this group, and was relieved that I was not asked to create my own panel, as my skills are not up to par.

All together, we had 25 women in attendance, and the event was a success, if I dare say so! Everyone seemed to enjoy themselves, and it was great to interact with these women outside of the more serious court setting. 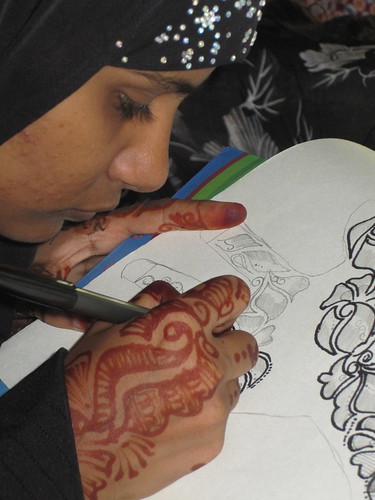 For her panel, this young girl (a member of the Tilakwada Yuwati Manda) outlined her hands and drew henna designs on them, representative of what she wears on her own hands.

Through this process, and numerous discussions with my hosts, I have learned a lot about the tribal culture in this region of Gujarat. The Gujarati tribal peoples are an indigenous minority in the state. The 2001 Census of India found that tribal peoples make up approximately 14.8% of the population of Gujarat. [Unfortunately, the analysis of the 2011 census is not yet complete, so I am unable to provide a more recent statistic.] Overall, tribal peoples comprise approximately 8.2% of the total population of India. In Narmada District, numerous tribes make up the tribal peoples. Some examples include the Bhil tribe, the Vaswa tribe, the Tadavi tribe, and the Baria tribe. The different tribes do not live separately from one another. Rather, people and families from different tribes live together in the same communities. In addition, there is a Muslim presence in many of these tribal communities. The Muslims live in the same communities as these tribes, but they are not tribal peoples. The Muslims have a very different culture.

All of these tribes now speak Gujarati, but it is a different dialect than urban Gujarati. The tribes that touch the Gujarat state border also have slightly different dialects that include words from neighboring states’ languages. The urban version of Gujarati is what is spoken in the state courts of Gujarat, which is why the tribal communities are unable to understand the government court proceedings. 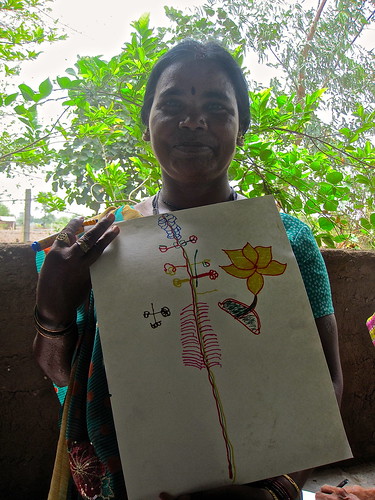 A design drawn on the wall of a house at the time of marriage.

Tribal communities do not practice a specific organized religion. They instead worship life, nature, animals, and the like. For this reason, they live very closely with nature. Nature is very much a part of their day-to-day lives. These communities used to be migratory, but have now become more rooted and generally work in agriculture. Many tribal people still migrate for a few months at a time during the harvest season to work. This agricultural and nature oriented lifestyle was depicted in the quilt panels that we worked on this past week. [I cannot wait to see the final product!] 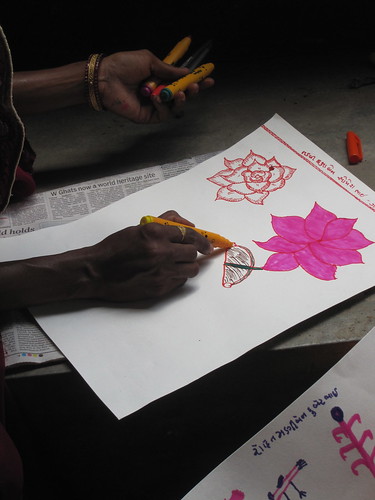 However, the tribal culture is starting to be transformed by the Hindu influence. For example, women in the tribal communities tend to cover their heads with their sarees, as do women in the Hindu culture. In Hindu culture, it is seen as disrespectful if a woman’s hair is showing. This tradition has begun to seep into tribal culture. In addition, the overall female to male sex ratio in Gujarat is declining. The female to male sex ratio in tribal communities is still not equal, but it is higher than the state ratio. Because of this, many upper caste families with sons are coming to tribal communities to find a wife for their sons. These families would rather have their sons marry a tribal woman than a low caste woman, such as a Dalit woman*. This has increased the Hindu influence in the tribal communities.

Before wrapping up this post, I want to emphasize that this is not meant to be taken as a complete description of the tribal culture in Narmada District. This is simply a summary of what I have learned about this culture thus far. As I learn more, I will be sure to post updates so as to shed some more light on VIKALP’s stakeholders.

*Note: VIKALP also works to empower Dalit women through the Nari Adalat women’s court. We have not yet had the opportunity to visit the Nari Adalat court, but we hope to do so in the next few weeks. Once we do, I plan on writing a blog post about this court – hopefully with a court case or two – in addition to posting photos.