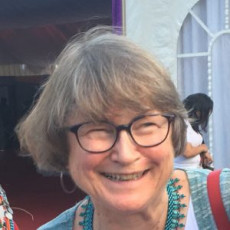 
Uganda: A Contrast in Style and Spirit 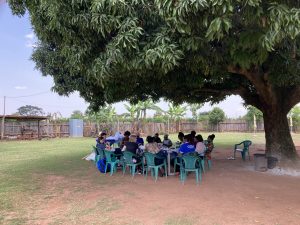 Training in Uganda Under the Mango Tree

Day One of embroidery training in Uganda and the contrast to Zimbabwe could not be more evident.  The ladies of Uganda are more mature, more practiced in their embroidery skills, and far more serious than their younger counterparts.  Introductions were very formal and there was a shyness about them, as though they didn’t have any idea of their ability.  When we showed them photos of three of the quilts that their embroidery had produced (war stories, COVID, and bread) they were really delighted that their work had been presented so well.  I wish I had jettisoned a couple more shirts and trousers to make room in my suitcase for at least one of the quilts.  I think seeing it in person would have shown their artistry to even greater advantage.

Then, on to the business at hand – embroidery.  These ladies are very interested in having their work become a regular source of income.  When Victoria and I met in Washington, DC earlier this summer, we  discussed themes that the ladies might attempt and we settled on birds of Eastern Africa. I sent her photos of the most colorful and iconic avian subjects I could find and she commissioned an artist to produce sketches that could be used for embroidery.

I would have preferred discussing this with the ladies, but our time is short and Victoria seemed to think this was a subject they would embrace – and they did. Each chose a bird to her liking and, based on color photos, began to select threads to match.  They really wanted threads to match exactly what they saw in the photos but that’s just not possible so I began to draw on their creativity.  What color could you use instead?  Which colors are the most important in this design?  How could you create a color you want if there isn’t one available in the hundreds of skeins of embroidery floss I had brought for them?

As I suspect they have done for much of their lives, they found a way to make it work.  Many of them are working by using two different colors at once to create a new color.  The effect is amazing and they are very pleased with their work.

As the afternoon progressed, their experience with needlework became even more apparent.  Their stitches were consistent, even, very neat and they were fast!  When I teach embroidery, I always tell my students that “good is better than fast!”.  Here, I got both – good and fast!  I have no doubt that many will finish their first block before the training ends on Friday.

One thing that has slowed me down a little is that much of the instruction has to be done with an interpreter.  I can show them how something is to be done but much of that still requires an explanation and “embroidery words” are probably not the most important ones taught during English instruction.  However, as with any group, those who were first to grasp a new concept, quickly helped others. That sense of support and sharing is one of the important results of coming together for this work.  They support one another, they encourage one another, they share ideas and thread.

“The whole is greater than the sum of its parts” clearly applies here.  I simply cannot overestimate the benefits of coming together to share the creative process.

As the afternoon progressed, you could see them relax more with each stitch.  The smiles became more frequent and now and then a burst of laughter would let me know that we had reached the sweet spot of what this training represents.  Yes, it’s a way to earn money. Yes, it’s a way to hone their skills to perhaps improve their income even further. But, more importantly, it’s a way to share positive experiences and to feel good about themselves after the terrible hardships they’ve endured.