Hannah Wright: Hannah received her BA in philosophy, politics and economics from University of Oxford in 2005. She went on to teach English in Rio de Janeiro, Brazil and worked in Project Management for the British Civil Service. Hannah has had a keen interest in the Israeli-Palestinian conflict since her first visit to the region in 2002. At the time of her fellowship, she was studying for a MS in gender and international relations at the University of Bristol in the UK, and also studying Arabic. After her fellowship, Hannah wrote: "I felt that blogging and producing articles for the British media was one of the most important things I did, because while there is a lot of information available in Britain about the situation in Palestine, very little of it comes directly from people on the ground speaking about their own experiences. I feel this is a very important aspect of international advocacy." 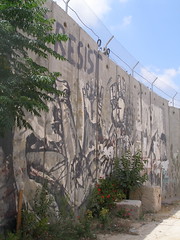 On Wednesday I visited Tulkarim (طُولكَرِم), a governate in the north of the West Bank on the border with Israel. Part of Tulkarim was annexed in the 1948 war and so now the Arab residents in that area are Israeli citizens, while the rest live on land occupied since 1967. The land in Tulkarim is highly sought after as it is known for its rich water resources, and so the negotiations around land ownership in this area have been some of the most difficult of all. Under the Oslo Accords, this land was supposed to be returned to the Palestinians a decade ago, but this agreement was never fulfilled. Today, those living in Tulkarim, as in the rest of the territories occupied since 1967, are officially classed as “residents” by the Israeli government but not owners of the land, despite the fact that they have owned their homes for generations.

Now the infamous ‘separation wall’ has been erected since 2000, even more Palestinian land in Tulkarim is inaccessible, such that no one is able to visit their family, friends or places of work on the other side. 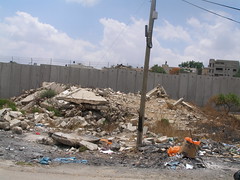 The wall does not run along the border established in 1949, but right through the middle of the villages of Tulkarim. Local women told me that two hundred shops were destroyed in order to build the wall, as well as many homes, and farmers have been separated from their land, leaving the economy in tatters. I was told the story of a bride whose new marital home was demolished on her wedding day. She insisted on going into her home to see the rooms before they were destroyed, and the women of the village had to drag her away so that she wasn’t hurt. Many people in Tulkarim have luxurious homes, but since the wall was erected have had extreme difficult finding the money to feed themselves. Other homes which are close the wall were forcibly overtaken by the Israeli Defence Forces for use as watch towers to monitor 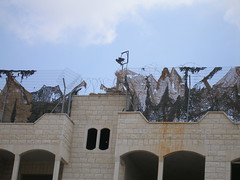 activity around the wall, and as we visited these places my Palestinian companions were acutely aware of being watched. Another young woman explained that she had been in high school before the wall was erected, but was forced to quit because she could no longer get there every day. Instead of completing her education she married early; a widespread problem among Palestinian girls whose life chances are severely limited by the immobility imposed by the occupation. She told us how she was afraid to make any improvements to her home because it was continually threatened with demolition. Many of the women in Tulkarim have husbands who work on the other side of the green line, who fear coming back home in case they are not allowed back across the line and cannot return to work, making them unable to provide for their families. For this reason many women live and raise their children alone. 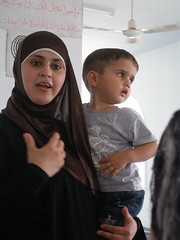 As I listened to these women’s stories, I could see them searching my face for a reaction: surprise, shock, dismay. I have to say, as terrible as these stories are, I am no longer shocked by them. I feel anguish, yes, but not shock. If you are looking for a ‘news’ story here, you will not find one; thousands of stories like these from Palestinians under occupation have been filtering out to the rest of the world for years. No one who pays attention to the news media in Britain can be unaware of what is happening here. Why, then, is so little being done? We often talk about ‘war fatigue’, the idea that the more we hear about the suffering of others the less we can bring ourselves to care. I have often heard people say “I don’t watch the news, it’s too depressing,” which suggests that they have not ceased to be emotionally affected by it, but that empathy is uncomfortable for us – our response is avoidance rather than action. What would it take, I wonder, to change that?