(I apologize in advance for the length of this blog…I know I promised brevity.  I lied, just this once.  I’ll make it up to you with lots of photos?)

This past week, I have attended three meetings and am still attempting to get a grasp on the multiple issues facing slum-dwellers and the solutions.  A meeting on June 15th was the launch of the Kenya National Commission on Human Rights’ report on the state of human rights in Kenya.  I haven’t read the full report yet, and it isn’t available online as of now, but I will report back on this one.

The other two meetings were community workshops on water tariffs. 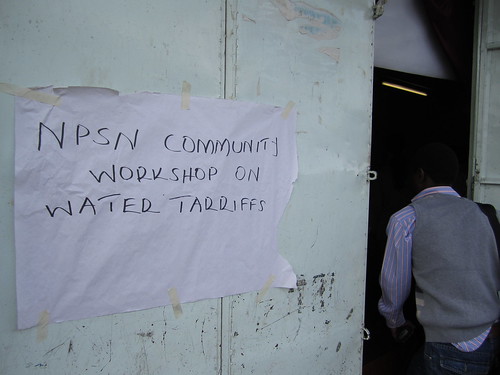 Hakijamii, in collaboration with NPSN, plans different workshops in neighborhoods around Nairobi to educate people on the importance of clean water, their rights (there is a lot of buzz around the new constitution), and the costs associated. People can afford electronic descalers as they can provide good quality water within less cost. Water in Nairobi is controlled by Nairobi City Water and Sewerage Company, which like many utilities companies, seemingly runs a monopoly.  Needless to say, people in the settlements have not seen much progress by the government nor actualized provisions, so trusting and paying NCWSC is not the instinct. 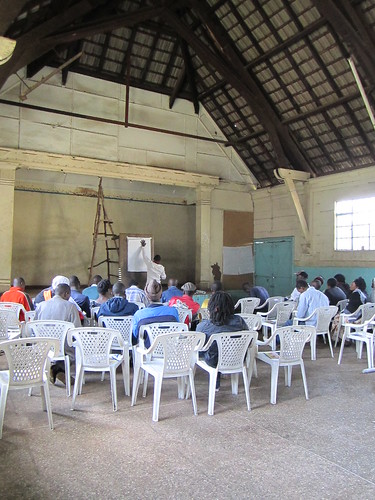 There are so many issues facing Kenya’s water, it is kind of difficult to find a starting point.  First of all, a lot of natural sources are contaminated.  Sewage drains directly into the rivers.  Clean-up efforts are in place, and there are treatment facilities capable of creating potable water, but costs are prohibitive.  NCWSC has committed to installing more water lines in the settlements, and they have plans to install proper sewage lines, but convincing the people to pay the high start-up costs is a challenge.  This is particularly so when they are paying a monthly fee for a sewage line that does not exist yet.

Additionally, water costs up-front seem unaffordable.  The cost to purchase a water meter for one’s home (in order to tap water directly into the home) is 5,000 shillings (around $57).  For many people, that is more than their monthly salaries.  After the start-up cost, the fees get more reasonable.  Monthly, they will pay a fee for water, depending on usage, but typically around 19 shillings for 10 m3 and another 14 shillings for sewage (for a total around 30 cents).  Problems arise because the promises of additional pipes are not fulfilled yet, and those that are are easily tapped.  NCWSC is also setting up water kiosks around the settlements for people to pay to access, but the cost of these are more expensive over longer periods of time, and many do not have water in them yet. 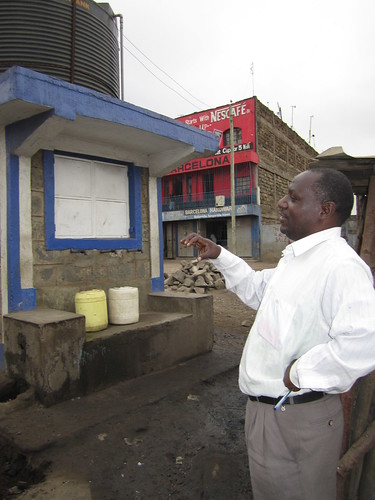 That is a really primitive explanation.  But hopefully, the idea comes across.  The goal is to make water affordable and accessible to the majority of urban homes.  So in a nutshell, that is how I was introduced to the Mathare settlement. 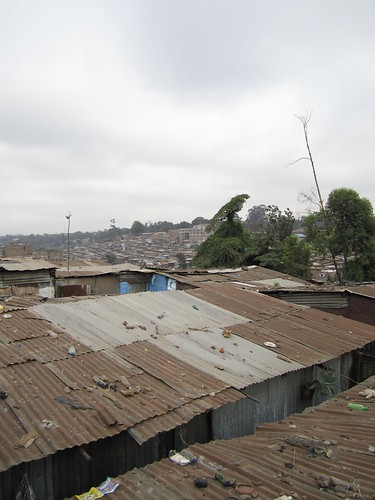 Mathare is a collection of settlements, and it is largely believed to be the second largest in Nairobi (after Kibera).  Population estimates range anywhere from 500,000 to one million.  And while Mathare is not famous like Kibera (which has roles on tv shows and was the filming location for The Constant Gardener), it is no less striking.  It was one of the hardest hit areas during the post election violence, but despite only three years time, it seems to have collected itself from the ashes. 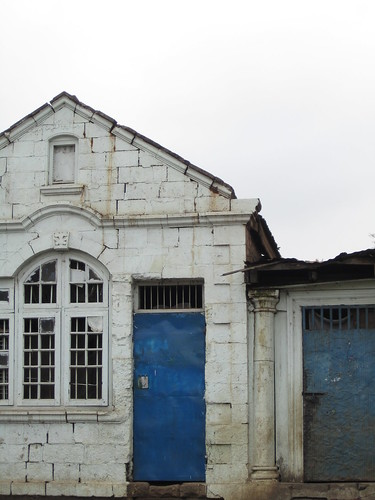 I had been told I was going to a community workshop.  So dressed in a skirt and sandals (so inappropriate for a walking tour of a settlement!), we drove to Mathare Worship Centre.  What I was not told was that the regional NPSN director for the area, Christopher Maina, planned to take us around Mathare.  Besides the wardrobe miscommunication, I was thrilled.  As I mentioned in my blog about slum tourism, I am very mixed about the attributes of leading Westerners around settlements, but then again, this is what I am here to do…to learn about the actuality of life here and to try to impact changes, to advocate for these people.

We began with a tour of Kiboro Primary School, a government-sponsored school for kindergarten through 8th grade.  After touring the grounds and the water/sanitation facilities, the Head Teacher, Dorcus Mutinda, welcomed us into her office.  Of the 891 students, 30% are orphans.  Food is supplied by the World Food Programme and textbooks by the government.  Healthy habits are a large focus of the school, but water constraints make it difficult to follow everyday.  She told us, for example, that the smaller children tend to be pushed out of the way in the hand-washing line.  She spoke of the school’s challenges and needs, but also seemed very hopeful. 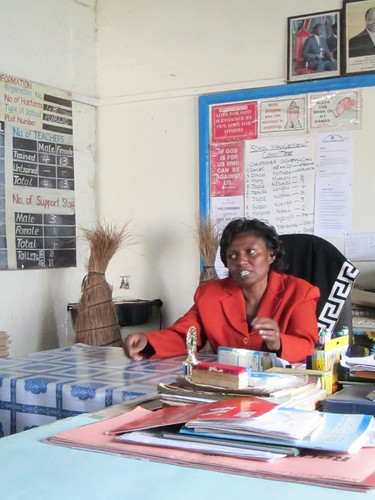 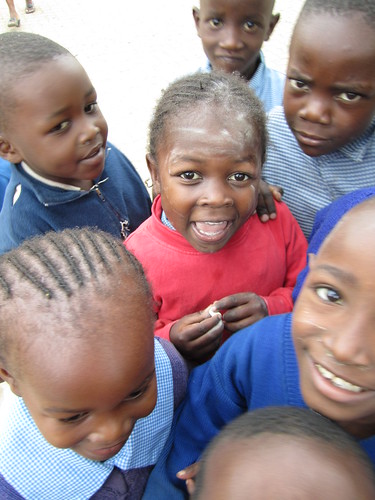 The children were excited and friendly and swarmed me, as usual.  Children are always a joy.  They don’t see me and think of what they do and don’t have.  They don’t see their socio-economic status, or feel bitter about my presence.  They see me and see a novelty.  A mzungu in their midst, willing to talk to them and interact with them.  For me, that unabashed curiosity and joy is the best way to temper the overwhelming feelings of sadness.  And unlike my time in the Nigerian Delta, the sight of me didn’t make any of them cry!  Already this visit was going smoothly. 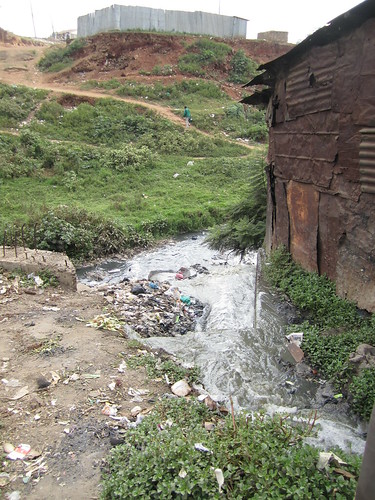 Christopher then led us deeper into Mathare, in order to really grasp the water issues.  He showed us where the sewage runs into the river and the water lines that get tapped.  After about an hour, we headed back to the Centre to start the meeting.

I will save the descriptions of the disparaging conditions for another blog, especially since everyone always writes about how sad/dirty/poor/fill-in-your-word-of-choice the settlements are; I will have plenty of time for that with Kibera.  I will leave you with the positive attributes of Mathare.  These people are living.  Yes, the conditions are bad and the government needs to step up efforts to confront these issues.  Yes, more could be done by the people of Mathare to improve such issues like waste disposal, but these people are making the best of what they have.  I didn’t hear one complaint; I didn’t have a single person ask me for anything.  I was welcomed, by adults and children alike, into their lives.  I saw people working, relaxing, doing chores, laughing, getting on with life.  Three years ago, this settlement was torn apart by factionalism and violence.  I have been so impressed with the resiliency of the Kenyan people.  They are educated on the issues; they know the reality of the situation, and they are working for change.  But do they whine about it?  No.  A ray of hope that community efforts, spearheaded by groups like Hakijamii and NPSN, are giving them an outlet to try to actualize change.  And that is beautiful.

I have droned on enough now.  As always, my Flickr set has more photos and information accompanying each photo.