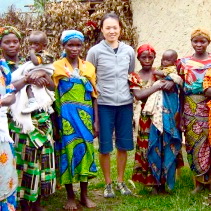 
WHAT DOES IT MEAN TO BE AN ETHNIC MINORITY?

Tags: Batwa, Great Lakes Region, Minority, Sartre
Growing up as an ethnic Korean in the extremely white town of Boulder, Colorado, I learned at a very young age that people saw me as different. With this difference came the label “minority.” This term seems quite straightforward but, actually, its use confuses me a bit. An online dictionary definition of the word states that a minority is “A group differing, esp. in race, religion, or ethnic background, from the majority of a population.” I will mainly address the issue of being a racial minority, since it is based on my race that I have always been called one.

Now, I suppose, if I am looking at myself in the context of the population of my hometown (approximately 88% Caucasian), or of the U.S. as a whole, I am a “minority.” But, since Asians collectively constitute one of the largest groups in the world, as an Asian walking the planet, I am not really a minority in the truest sense of the word. Then again, if we are looking at specific ethnic groups, as a Korean, the term, again, becomes more accurate. There are around something like 78 million Koreans in the world, relative to the almost 7 billion humans on the planet. In this regard, many Europeans could also (technically) be considered minorities, but then whites in the US don’t give the label “minority” to each other, even though one may be of Norwegian heritage, the other French, and yet another Greek. And then, according to this source, there are around five billion people of color, and around 1 billion white people walking the planet. So, as a person of color, along with all the other people of color who are called minorities in the U.S., we are actually, again, part of a majority. And on and on.

Here in Uganda, I am learning that people take their identity through their paternal tribal lineage. But, collectively, it seems they still see themselves as “Ugandan.” This shared identity as “Ugandan” helps bring a sense of unity across the populous, even if tension and stereotyping of the different tribes still occurs. There are also regional language differences but, again, the shared fact of being “Ugandan” seems to help overcome this fact. Thus, a Ugandan from the southwest who speaks Lutoro can come to Kampala and speak (in English, or maybe Kiswahili) to a Ugandan who speaks Luganda, and they can get along (someone correct me if I’m wrong about this).

If you wanted to place the label “minority” on a pygmy, there is far less confusion about it. It would be true in every sense of the definition I’ve provided. First, there are the literal numbers of pygmies. Freddy recently sent me an article on the diminishing Batwa population. The author of the article writes, “Wangabo said research conducted by the organisation in the past five years shows that the Batwa fell from 600,000 to 270,000 within the Great Lakes region.” Granted there are other pygmy communities, not just Batwa. But, collectively, according to one source I found, they still only number around 250-500,000 (I’m talking African pygmies. There are Asian pygmies too, but they are ethnically distinct from African pygmies, and even if their numbers were included with African pygmies, their numbers would still be small). The pygmies are, quite literally, at risk of becoming extinct.

Then there is the issue of how one is treated as a minority. This is the part that is left out of the dictionary definition. As a minority, one can be treated as if they are, well…“minor.” They may be seen as less important, viewed as untrustworthy, not liked as much (or at all), not taken as seriously, not given as much attention (until they are being ostracized, and then they are given too much undesirable attention), not counted in the same way, not given the same opportunities (sometimes they are given preferential treatment, more often they are given the opposite), seen as less intelligent, less capable, less respectable, lacking integrity, seen as backward, as “weird,” and the list could go on.

Regarding not being given as much attention, I have to admit that, rationally, I understand. The majority is going to pay attention to the majority’s problems. And the powerful are going to pay attention to the powerful’s problems. For example, my friend Mark aptly pointed out that, had the recent terrorist bombings happened on the soil of a power country like the US or Britain, headlines would probably be screaming about them for weeks. But the incident quickly faded from media headlines because (dare I say it?) it happened in Uganda. Add to that fact that there are so many problems in this world vying for our attention and one might say that’s “just how the world is.” But is this just how the world is. Or is this how we’ve decided for it to be?

To be fair, I see how many people go far, very far, out of their way to put their energy behind something that moves them, even if there is nothing in it “personally” for them, Their hearts and minds are simply moved, compelling them to respond. I also know most of us are just doing the best that we know how. But I also wonder (for myself included), how much of this “complacency” for/ “inaction” on behalf of our fellow human beings who are suffering so deeply comes from sheer unwillingness. Of course there are also social and cultural norms in there too. If we were raised with a stronger sense of caring for our fellow human beings, regardless of culture, race, distance, etc., would the pygmy situation be better? I can only imagine that it would be, even if only a little bit.

So here I mention one of the characteristics of humans that can be so wonderful. We can choose to act in new and different ways. We can choose to look at the most oppressed and decide that we will try to do something, even if very small, that we were not doing before, to help make their oppression history. Sartre believed that it mattered less that the good “is,” than that it be “through us.” Let it be through us, then. I don’t say any of this to be preachy. Just thoughts for myself, as much as for others. Those who know me well know I am certainly trying to work on all of this.

Below are some more pics for fun.

The daughter of one of my boda drivers

These big birds are all over Kampala