What made the rats disappear…

Before getting to my patrol with the SATIIM rangers, let me tell you about my first morning back…

I’ve had respect and appreciation for Gomier, the Rasta from St. Lucia who runs a restaurant downstairs from my apartment, but this morning he achieved hero status.

At around 6:30, I went to the bathroom and was shocked to find a fat, three-foot snake lounging along the edge of the sink, its small head slightly raised and turned toward me. My first instinct was to grab my camera, of course, but I realized I had left it at work. Probably for the better. My second instinct was to find Gomier. Fortunately, he was downstairs and heard my knocking.

After assessing the situation (“yeah, that’s a snake”), he got a machete. This wasn’t a glistening, new machete. It looked a bit worn and rusty. But Gomier stood on the bathtub, a chest-high shower wall separating him from the sink and snake, and he stabbed downward at the little head with the knife’s dull tip. Sparks flew as it hit porcelain, and the snake hissed and recoiled. I felt really bad for the thing for a minute. It looked shockingly defenseless. But then when it seemed to try to strike, it occurred to me that the snake could win, and I would be responsible.

I suggested maybe we should just close the bathroom doors and hope the snake would eventually slither out a window. Gomier would have none of that. “The snake will die.”

The blade was hitting tile now, more sparks. And then the thing was dead. Decapitated. Fresh blood pooled on the floor. I don’t like to see things die (and I think as a Rasta Gomier’s not so into it either). But it was a big relief.

Now we tried to figure out what it was. Not a boa. I had seen a baby boa, green and brown, in the national park earlier in the week. This one had reddish brown splotches, lined with black and yellow. I’ll have to look it up. Let’s hope it’s not known as ‘the friendly snake – a cuddly creature that won’t harm a thing but will scare off the pests in your house,’ or ‘the mafia snake – the only wild animal whose entire family will seek revenge if you kill it.’

Anyway, thanks, Gomier. If anyone’s in the neighborhood, come and eat at Gomier’s Restaurant, ‘Where Health is Wealth!’ He’s a really good cook, and I’m not just saying that because he might have saved my life. 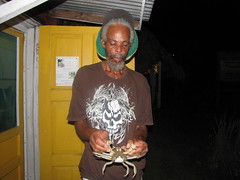