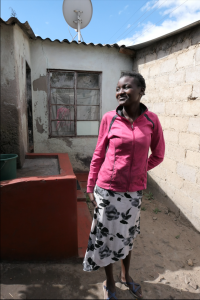 Nyarayi lives in Mbare, a suburb of Harare. She married at age 15 and had two children by the time she was 18. Nyarayi says she hopes her daughter will wait to marry until after she finishes school.                  Photo: Alex Kotowski

For the past four years, I’ve been working on projects to end child marriage both internationally and in my home country, the United States. This summer, I’m investigating the issue of child marriage in Zimbabwe and probing the distinct economic and social factors that contribute to its continued occurrence throughout the country, even though it was outlawed in 2016. When I talk to people both at home and here in Harare about child marriage, many respond with interest about the subject and positivity about the value of efforts to end the practice. But not all of my conversation partners feel this way.

While almost everyone agrees that 12- and 13-year-olds are too young to marry, some wonder: what’s the big deal for a teenager aged 16 or 17? More than one individual can cite a beloved grandmother who wed at 16 and lived happily ever after. After all, wasn’t Juliet 13 years old when she married Romeo? And if a girl becomes pregnant, isn’t it in her best interest to get married? Taking a broader perspective, some ask: Why does a “soft issue” like child marriage get so much attention? Zimbabwe is suffering from record unemployment and an economic crisis. Wouldn’t it be better to focus on the big problems of poverty and hunger? 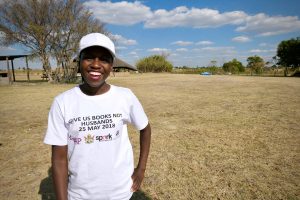 Eighteen-year-old Yeukai sports a WAP “Give Us Books Not Husbands” campaign shirt. Yeukai says she has no interest in marriage until she finishes her studies. Photo: Alex Kotowski

The term “child marriage” refers to any union where one or both partners are under the age of 18. Globally, 12 million girls marry each year. To put that number in perspective, 12 million people is roughly the population of Belgium. Child marriage impacts the entire course of a girl’s life. The long-term negative outcomes of child marriage on a girl’s health, education, and safety are well documented.

Health: Early marriage can cause serious harm both to married girls and to their children. The vast majority of child marriages are unions between girls and adult men; this dynamic creates a power imbalance in which girls have limited ability to negotiate safe sex and make decisions about pregnancy and healthy birth spacing.The younger a girl is, the less likely it is that she both understands and has access to reproductive health care.

Lack of access to reproductive health services poses a serious threat to a girl’s health. In developing countries, complications from pregnancy and birth are the leading cause of death among girls aged 15–19.  Girls who marry before age 15 are five times more likely to die in childbirth than women in their twenties are. The younger a girl is when she gives birth, the more likely it is that her pelvis and birth canal are not fully developed, which places her at high risk for maternal mortality. Additionally, children born to teenage mothers are significantly more likely to die during the first year of life than children born to adult women. 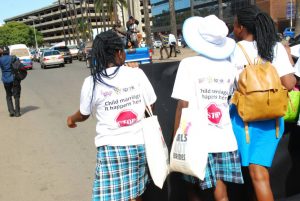 Girls march with the Woman Advocacy Project (WAP) to call for an end to child marriage as part of the “Give Us Books Not Husbands” campaign.   Photo: Bernard Chihota

Education: Girls almost always leave school once they marry, which limits their lifelong earning potential and increases their dependence on husbands and families. With limited education, girls are less likely to enter the workforce, and when they do, it is usually in low-paying professions. Marrying early leaves a woman vulnerable to poverty and hunger if her husband dies or if her marriage dissolves. Girls from poor families are significantly more likely to marry than girls from rich families and these early marriages reinforce cycles of intergenerational poverty.

Safety: The issue of education is closely tied to the issue of safety. According to Human Rights Watch, married girls between age 15 and 19 with minimal education are at heightened risk of domestic violence and spousal abuse when compared to adult women with higher levels of education. A woman with children who left school at 15 has a limited ability to support herself and her children; she seldom has access to resources that would help her escape an abusive partnership.

In the coming weeks, I’ll be reporting on the issue of child marriage in Zimbabwe, the major factors that contribute to the practice, and the innovative solutions that groups like the Woman Advocacy Project (WAP) are using to tackle the problem.