Women Speaking up for Women in Nicaragua 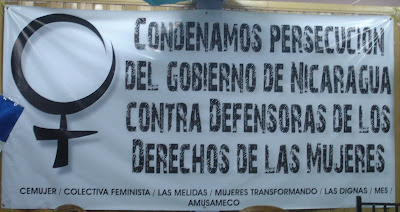 Last week, a group of Salvadoran women’s organizations gathered together to make a joint statement about the current situation for women’s organizations in Nicaragua. They pointed out that Ortega’s government in Nicaragua has become increasingly threatening to women’s groups there. Their statement asked international organizations to step in and the government of El Salvador to make a diplomatic statement of solidarity with the women suffering persecution in Nicaragua by banning Nicaragua’s president from the Ibero-American Presidential Summit which is going to be held at the end of the month of October.

One thing that is fascinating about the declaration that was made and its implications for the current Salvadoran situation is that some people have criticized the women’s groups for their timing. Currently, El Salvador is in the midst of an election campaign and some people have considered the pronouncement to be untimely because it might prejudice one party over the other. Cemujer decided that the time frame for human rights is urgent and shouldn’t be dominated by the needs or advantages of a political party.

It is one thing to denounce human rights abuses that took place in the past and it is entirely another thing to fight against the continuing violation of people’s human rights. The lives of those who are denouncing abuses are sometimes also put at risk for speaking up for those with less recourse than them. The violence of fear becomes part of the challenge for defending those who are being abused.