Yesterday I followed Ram and his partner-in-research Simon Robins to meetings across Kathmandu, and was introduced to key members of Nepal’s transitional justice scene. Ram has spent the last five years building up an impressive network of politicians, activists, and foreign NGO workers in the capital, which he leverages to promote NEFAD’s grassroots advocacy efforts at the national level. Our first meeting was at the Truth and Reconciliation Commission, where we sat down with the commissioner himself to talk about his work. 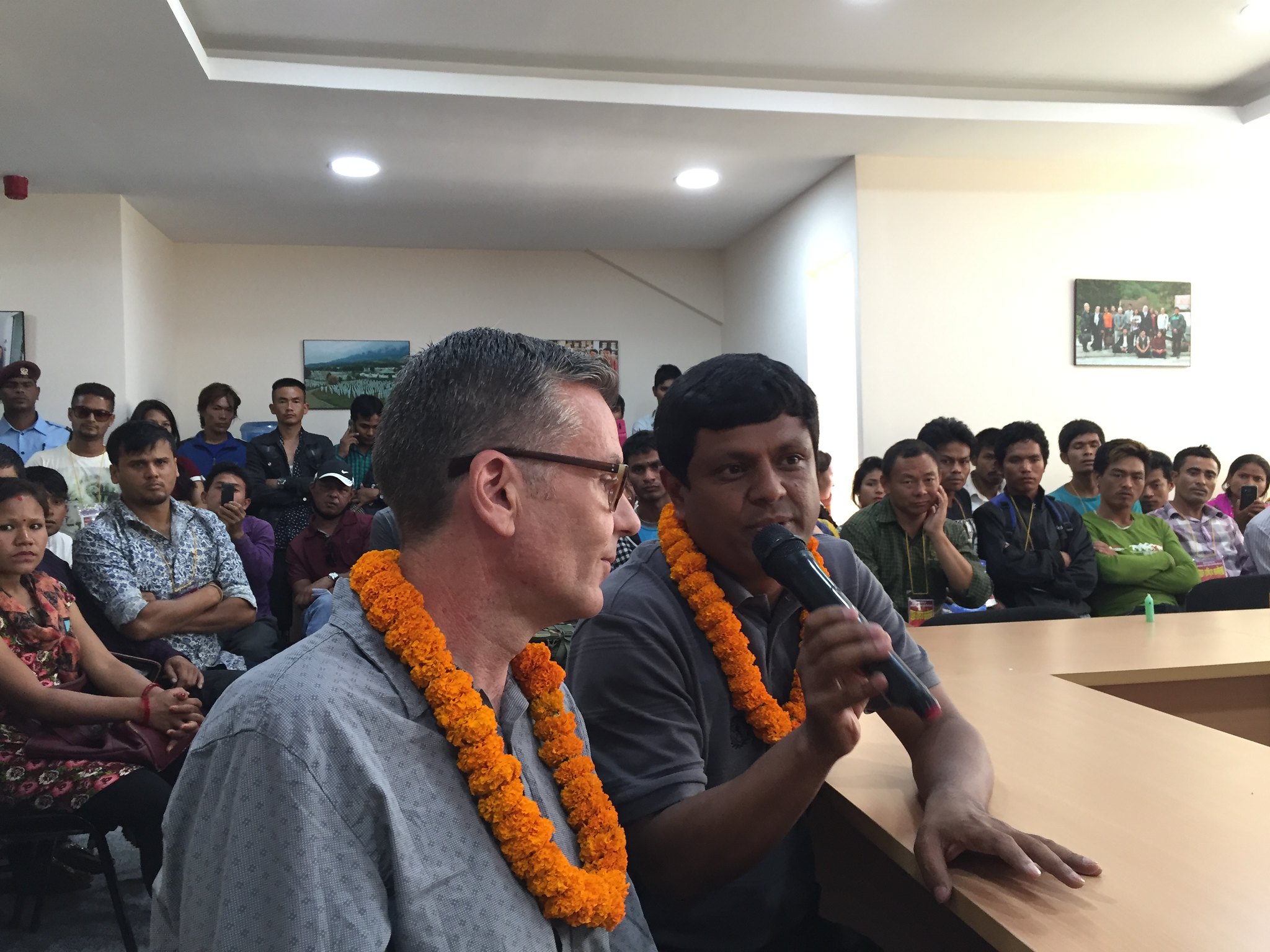 Ram and Simon talk about their research on the challenges faced by ex-PLA combatants in Nepal.

Everyone in the room was well aware that Nepal’s TRC is facing enormous challenges. The commission’s mandate comes from the Comprehensive Peace Agreement, which ended the war and integrated the Maoist insurgents into the political mainstream. The rebels soon discovered that they were on the same side as their former adversaries when it came to truth and accountability for what happened during the war. Very few actors in Nepal’s government are enthusiastic about a TRC process that could find prominent members of their parties responsible for crimes against humanity.

The government’s ambivalence towards the process makes the TRC’s work especially difficult. Over one year into the commission’s work, parliament is still rewriting laws around key issues such as amnesty and prosecution. Many of these challenges could be mitigated if the TRC had the international support and expertise to forge ahead independent of the government. However, the international community is more or less boycotting Nepal’s transitional justice process in protest of the TRC mandate permitting amnesty to those found guilty of major, politically motivated crimes.

Given this situation, our meeting did not leave me feeling too optimistic. The chairman of the TRC is passionate about his work, and affirmed the importance of an approach to justice that puts the needs of the victims front and center. But without resources – money, political will, or even functioning technology – there’s not much that he or the commission can do.

Later that day we stopped by the Commission of the Investigation of Enforced Disappeared Persons. Like the TRC, this Commission has been given an ambitious task, and limited means to accomplish it. So far, they have successfully registered over 1500 families whose loved ones were disappeared during the war. Now, they face the daunting task of investigating each case, finding the burial sites, exhuming and identifying the remains, and returning them to their families so they can finally be laid to rest. This is an enormous mandate, and like the TRC, the CoIED does not have the financial resources or technical expertise to follow through. 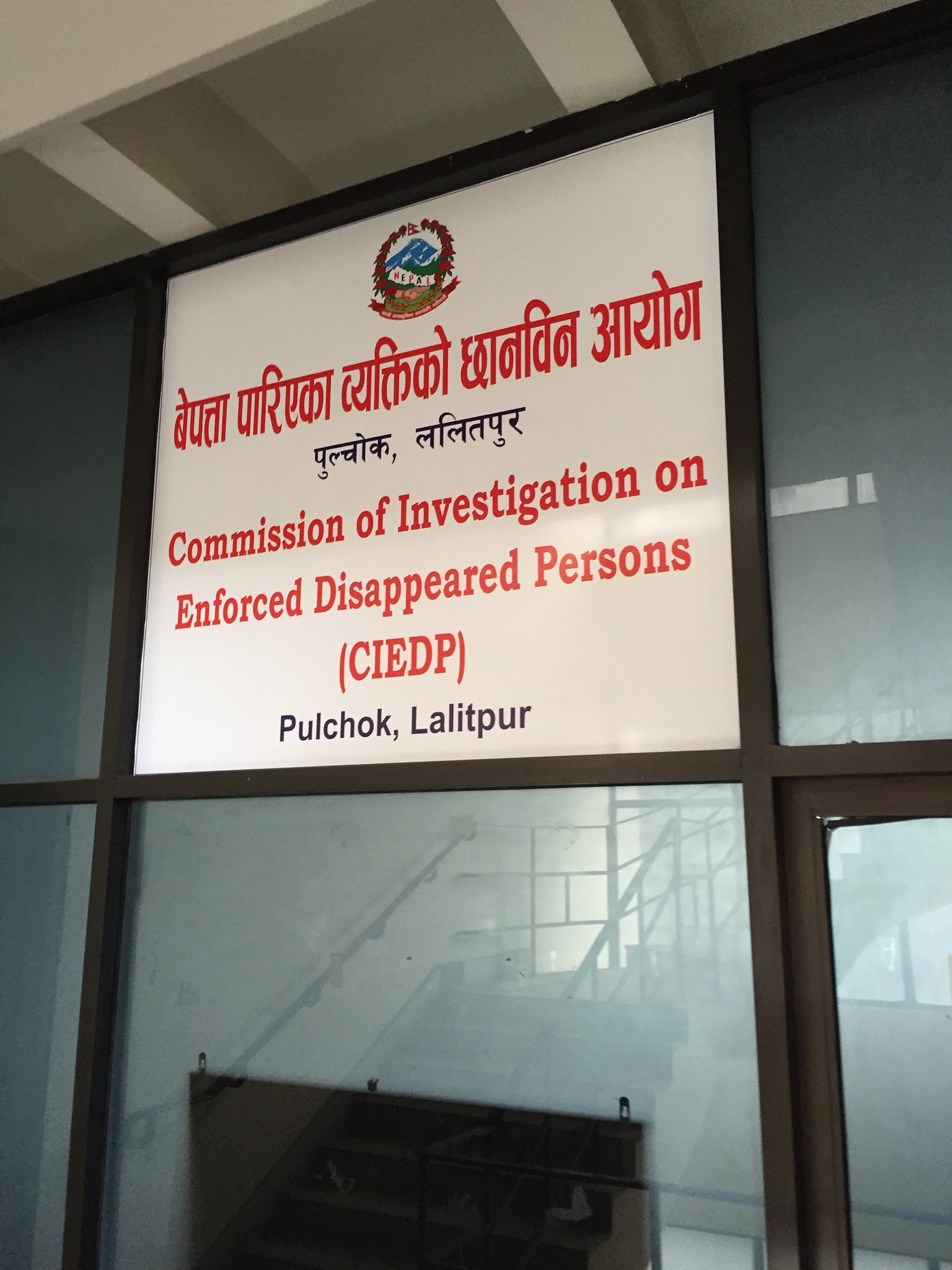 Ram is aware of these shortcomings, and frequently speaks out about the flaws of the commissions as part of his advocacy work with NEFAD. Despite this, his relationship with the chairmen of both commissions is pleasant and supportive. He describes his approach to the commissions as critical engagement: he sees their work as vital, regardless of their limitations. For now, these commissions are Nepal’s only chance at uncovering the truth about crimes committed during the war.

In addition to the official commissions, we also got to see the activism of the Discharged People’s Liberation Army when we stopped by a conference they organized to demand their dignity, identity, and rights. Much like NEFAD, the DPLA is a grassroots organization made up of people impacted by the civil war. The rank and file of the PLA who attended the conference have been failed by the peace process, especially those who joined the revolutionary army as teenagers.

The former combatants are still dedicated to the struggle for political representation and social justice for Nepal’s poor and marginalized, though now their tactics are explicitly nonviolent, rooted in a commitment to human rights. The DPLA’s conference boasted a packed hall of ex-PLA activists and political leaders, which was particularly striking compared to the quiet offices of the commissions. Their ability to mobilize reflects the commitment and energy of Nepal’s grassroots civil society to advocate for justice after the conflict in spite of political challenges.