A few thoughts on the current conjuncture in Peru

I am of the opinion that a disaster of tremendous proportions was avoided last Sunday when Ollanta Humala, a nationalist former military officer, defeated Keiko Fujimori in the second round of Peru’s presidential election. To me, a victory by Fujimori would have represented the vindication of Alberto Fujimori’s decade-long government and of the inexcusable human rights violations that took place during the latter; a clear case of impunity trumping memory and a cruel disregard for the dignity of the victims and families of victims of abuses committed.

My position, and that of many human rights activists here in Lima, however, is not synonymous with an uncritical support and acceptance of Ollanta Humala. As I have mentioned in a previous post, the future president has a questionable human rights record, having battled claims that he tortured civilians as a counterinsurgency officer in the early 1990s. His closing statement in the presidential debate, during which he asserted that regarding him there were only doubts, but regarding the Fujimoristas there were proven facts, was not quite as reassuring as it was intended to be.

Everyone here is anxiously waiting to see what direction the new government will take on human rights. Specifically, what will be its policy on the judicialization of human rights abuses committed during the internal war; on reparations for the victims and families of victims of the conflict; on the exhumation and forensic investigation of the more than 4,000 mass graves scattered throughout the country; on the fostering of a collective memory of the conflict? Each is an important dimension of the issue Peru’s disappeared.

Most would agree that the performance of the outgoing administration of Alan García on these issues has been disappointing to say the least. The 2008 annual report of the Coordinadora Nacional de Derechos Humanos (CNDDHH) denounced the administration’s distancing from and failure to apply many of the recommendations of the Truth and Reconciliation Commision, in addition to its passive attitude on the promotion of policies such as the National Plan of Human Rights and the Integral Reparation Plan.

Many consider that the García regime has been guided by a narrow understanding of development in which it is equated to economic growth largely based on the performance of extractive industries. They argue that this has resulted in a scenario in which human rights have been placed second, as evidenced in cases of conflict between local populations and extractive projects (the 2009 events in Bagua being an emblematic case, and protests in Puno a more recent one).

As we look to the future, there is cause for vigilance. Illustrative of the uncertain future of human rights, memory and justice in Peru are comments uttered on May 30 by Omar Chehade, who will be Second Vice-President under Ollanta Humala. While discussing the Madre Mía case—the very case for which Ollanta Humala has been suspected of having committed human rights violations—in an interview on the program “Prensa Libre,” he maintained that the victims were still terrorists and that they could well be alive and continuing their terrorist activities. Such accusations showed a clear lack of respect and sensitivity for the families of the victims of enforced disappearance, and an insult to the memory of the disappeared.

Although Chehade later publicly retracted his assertions in a letter to the CNDDHH and made a public apology to the memory of the victims of the case Madre Mía and their families, the incident is still a clear indication of the battle between impunity and memory that is currently being waged in Peru.

Now, more than ever, is a time for Peruvian civil society to be on its toes. 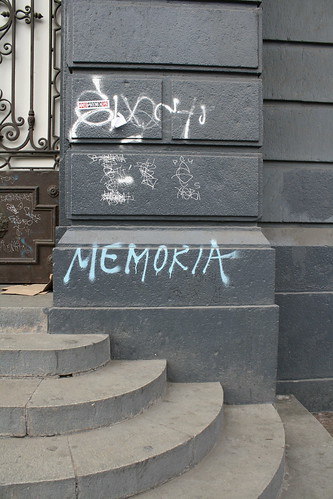