A Fling with Flia

(Note: These last 2 weeks have been monstrously busy – the usual quilting drama, field visits, proposal deadlines, 13th century monuments, 2 bouts of food poisoning, AP visitors, Albanian lessons, ….too many different activities to count each day before I collapse into bed and wait for exhaustion to overcome the sticky nighttime mugginess. And naturally, the blog has suffered. So I’m jumping back in with a cultural experience, for a little change of pace…)

Whew. With fewer than three weeks to go before I trade Pristina road dust for L.A. smog, I finally got to check eating flia, the quintessential Kosovar/Albanian summertime food, off my must-do list. And not only did I get to eat it fresh off the coals, I got to help make it. Ferdane, my friend from Balkan Sunflowers, invited me to a flia-making party at her house in Fushe Kosove. So Friday afternoon perpetual Peace Fellow Kerry McBroom, who came out to Kosovo to help me through the quilting process last week, and I went out to Ferdane’s mahalla to learn the fine art of flia-making. 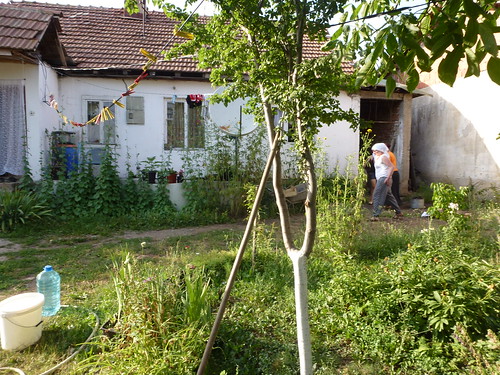 Ferdane's house in an Ashkali section of Fushe Kosova.

(Ironically, when we walked into Ferdane’s living room, her two younger sisters were sitting around with Joanna, a Balkan Sunflowers coordinator from the States, discussing whether they identify as Roma, Ashkali or Egyptian. You might remember in the last post that featured Ferdane, she said she was Ashkali. On flia day she identified herself as Egyptian. She said that’s how similar she considered them – she could easily be one or the other in a given conversation. So that’s one more note on the complexity of Roma, Ashkali and Egyptian identity here in Kosovo…)

After a bit more identity talk we got down to the business of making flia. Flia, for the uninitiated, consists of layer upon layer of baked dough greased up with a film of kefir-sour cream-oil mixture in between each layer. The trick that makes it good is that each layer is baked individually, and, if it’s authentic (like ours was, of course) it’s baked outside with a fire-heated metal lid weighted down with ash broiling the dough golden.

Kerry, as the oldest in the group, had the honor of wearing a white headscarf that apparently made her head flia-maker. She took the job seriously.

Kerry getting into the role of lead cook

The batter’s just flour and water (a tub of flour and “enough” water, to be exact); the filling is a bottle of kefir, a couple containers of sour cream, oil and salt. Which is good – the cooking part is so involved that the recipe should be a snap. We mixed up the batter and the filling, then headed outside to where Ferdane and her mom had built a fire in the yard and were prepping the baking lid. 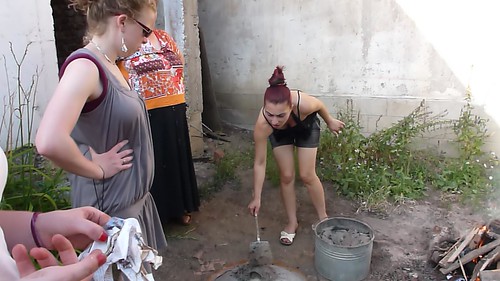 The baking process is where flia-making becomes a two-hour communal activity. You can’t just put the batter in an oven and be done with it (or you can, but it’s apparently not as good). The batter goes into the pan in strips, and once there are enough strips to make the pan look like a cart wheel, it’s time to set the 20+ pound lid on the top of the pan to bake the layer. 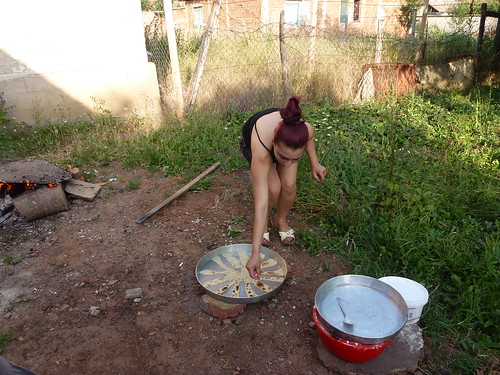 Ferdane showed us how to make perfect flia batter strips. Ours weren't always so pretty.

Tiny Ferdane, naturally, whipped the thing around like it was a pillow, while all my grunts and sensible knee bending didn’t stop me from almost dropping the entire ash pile into the growing flia each time I had to maneuver the lid.

Once the layer is cooked, it’s time to spread the filling on, and then top it with another layer of batter, ladling it in the spaces not covered by the last layer. 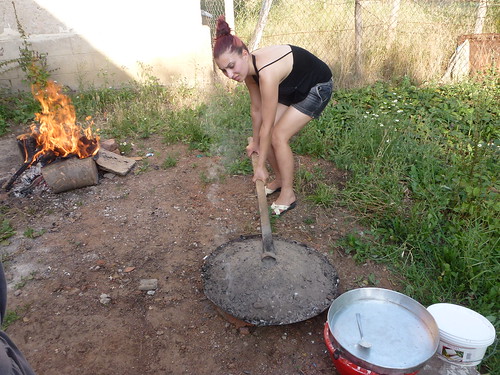 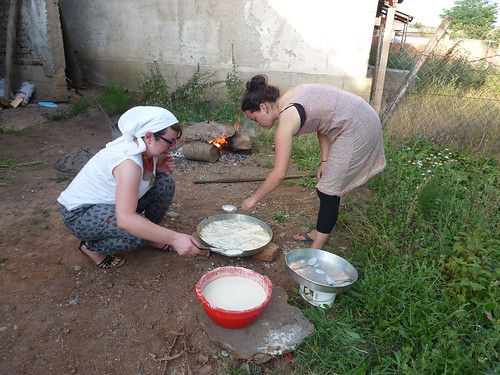 Kerry and I took turns on filling/batter layering duty.

Put the lid back on and repeat the cycle 30 or 40 times. After a couple rounds we reached an unspoken agreement that the three American girls would do the batter-ladling and filling-spreading, and Ferdane would do the heavy lifting. She was nice enough not to call us out for being weaklings!
It’s not so wonderful to be standing or squatting around a hot fire when it’s already 90+ degrees outside, but we had plenty of time to rehash the week’s work gossip, discuss ailments, chat with interested neighbors, watch the sunset, fill up on watermelon – not a bad way to unwind after a busy week. And at the end of it all, there was enough bubbling, steaming flia to feed a family of seven for three days! 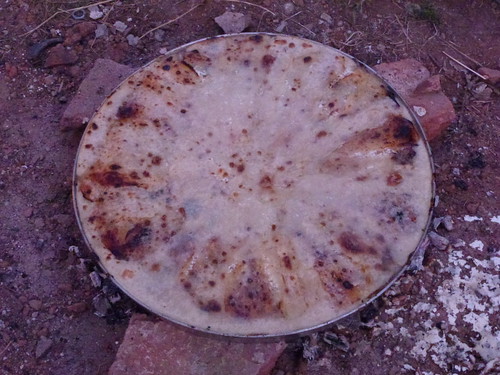 And the verdict? Crispy, chewy, oily doughy things are almost always worth eating, so no surprises there. I don’t know if I’ll be investing in a custom flia oven for my New York apartment, but I definitely wouldn’t turn down another invitation to a Fushe Kosove flia party.