The practice of Chhaupadi was made illegal by the Supreme Court of Nepal in 2005. However, this law had a very minimal impact, and as a consequence, the government decided to introduce further legislation which would punish those who force women into exile during menstruation with up to three months in jail, or a fine of almost 3000 Nepalese rupees ($30). Despite optimism that this would discourage people from practicing Chhaupadi, local people refused to file cases against their own family or community members. In late 2018, district governments in the far west of the country began denying state support services to citizens who were forcing the practice of Chhaupadi.

When I heard about the practice of denying state support services to those forcing the practice of Chhaupadi, I was skeptical. Whilst I agreed that an effective method by which to implement the law against Chhaupadi was essential, I was not sure that denying people of the services upon which they relied was the right way to go about addressing this problem. After all, speaking to a large number of girls who practiced Chhaupadi had shown me how strongly people believed in this cultural and religious practice. I was convinced that many would choose to abide by “God’s Law,” and to lose their state support, rather than ending a practice they deemed to be essential in order to maintain their purity.

These reflections led me to the office of the Ward Leader in Gutu. The county of Nepal is divided into six provinces, which are further divided into districts (such as the district of Surkhet), and then into wards. Each ward is led by an elected Ward Leader, who is allocated a budget from which to promote social, economic and political development. The village of Gutu in Surkhet belongs to Ward No. 6 and is governed by Mr. Amar Bahadur Buda at the present moment. 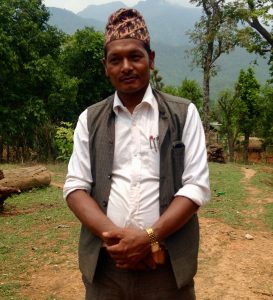 Arriving at the busy office of the Mr. Bahadur Buda, I was apprehensive about what kind of attitude I would find. Would he be willing to discuss the topic of Chhaupadi? Would he sugar-coat the problem, or tell me it no longer existed? Would Mr. Bahadur Buda take my questions seriously? Would he even have the time to see me?

Luckily, Mr. Bahadur Buda was welcoming, friendly and extremely chatty. He explained to me that the problem of Chhaupadi was a major issue in the village because: “Many unfortunate situations have arisen because of the practice of Chhaupadi in the village. Many women are at danger of extreme weather conditions and snakebites. And of course, there is also rape. It’s very dangerous for women, but it’s almost impossible to stop people following the tradition.”

“The ward and the municipality collaborate to work on an awareness programme against Chhaupadi. We tell people that they don’t have to stop the practice, they just have to let their girls stay in a separate room inside their homes. We plan to collect mother groups and teach them about the dangers of Chhaupadi as well.”

Awareness-raising seems to be a popular method by which to eliminate the practice of Chhaupadi, used by CAED and numerous other NGOs working on the issue. It appears to be logical, because education is one of the best ways to demystify a myth. Nevertheless, I thought to myself – what is the purpose of a law if it is deemed impossible implement, even by the government? Of course, it is a step in the right direction – but what else needs to be done?

I also realised that Mr. Bahadur Buda hadn’t mentioned whether people were actually being denied state support services. It transpired that he didn’t know anything about this strategy: “There is a provision for jail against Chhaupadi, but this is not implemented in practicality. People don’t want to go against their families and communities. And they certainly won’t complain against themselves!”

As our meeting drew to a close, I remembered how often I had heard about the corrupt Nepali government. This made me wonder – was I sitting opposite a political leader who himself forced the practice of Chhaupadi on this family? Luckily, I was not disappointed: “My wife and daughters do not practice Chhaupadi. They stay inside the home during their periods. But my parents – we can’t change their minds. The practice will end – but slowly. We need time. And we need a new generation.” 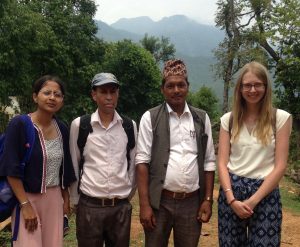 Indira, Ram, Mr. Bahadur Buda and I (left to right)