In the local villages of Nepal, traditional healers, also known as the dhami, are the first port of call for villagers who are feeling unwell or sick. The practice of traditional healing rejects western notions of medicine and an understanding of biological processes. Instead, it promotes the idea that the dhami, a spiritual healer, can suck the evil ghosts or spirits out of a person who is ill, thereby curing them of their impurity and bringing them back to physical health.

The logic behind the practice of traditional healing comes from a time when people did not understand the biological reasons for which they became ill, instead believing that illness was caused by ‘God’s Anger.’ In order to appease this almighty God, people began to worship rivers, mountains and forests. The concept of a witch developed simultaneously with this notion: a witch could prevent ghosts from entering the body of somebody. A traditional healer, or dhami, is a type of witch: he is someone who can act as a mediator between the spiritual world and the material world. He can purge the sick body of illness and he can cure the mentally unstable of disease or ailment.

In the village of Gutu, there are many dhami. These are always men and can be either literate or illiterate. They have learned their treatment methods from their parents or from senior dhamis. These men have great clout in the village – they are trustworthy, holy and, perhaps most importantly, they are the most readily available form of treatment. Their word is believed, and therefore they play an extremely important role in the elimination of Chhaupadi.

One sunny morning, we set out to find a local dhami, keen to understand a little more about what exactly he might think of Chhaupadi. After a few failed first attempts, we eventually tracked down Chandra Bahek, a popular dhami, who was undertaking agricultural work on a field near his home. He agreed to sit down for a short chat with us. Initially, he was extremely unwilling to open up and talk to us about the issue, pretending he didn’t even know what Chhaupadi was. But after a bit of persuasion, he let us in to his thoughts. 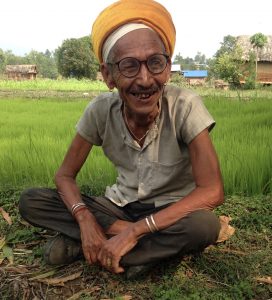 Chandra, the local dhami, tells us about Chhaupadi

First, I decided to ask Chandra about whether he thought that Chhaupadi was a choice. He replied in the negative, insisting that it was a law: a law of God. “Of course, there is a law that the government makes. But that’s not the most important law. The most important law is the one God makes. And God says we have to practice Chhaupadi.” His words were final and certain, and once again, I was reminded that the law seemed to be at the heart of this question. In Chandra’s mind, the law against Chhaupadi was worth nothing against the law of God – a law which highlights that women are impure and have to be removed from society during menstruation.

Next, I wanted to find out about his perception of the consequences of Chhaupadi: “There is no risk or danger associated with Chhaupadi. This tradition has existed in our society for many generations. Even my wife has practiced Chhaupadi her entire life, and nothing has happened to her. In fact, she is the picture of health and she has had so many beautiful babies. She would work on the fields all day, and then she would come home and boom! She would have another baby. She would then stay in the Chhau Goth for 21 days with the newborn, and they would both come back beaming. But now people have all these new rules – that women have to rest and take care when they have a child, that they have to eat nutritious food or go to a hospital. But that’s not the case. My wife is proof that nothing happens when people stay in the Chhau Goth, either during their periods or when they have a baby.”

It seemed that this dhami was pretty set in his ways. Nevertheless, he seemed to accept the idea that girls should not stay in the Chhau Goth: “Girls can stay in a separate room inside their homes when they are menstruating, that’s no problem. They don’t have to stay in the Chhau Goth They just shouldn’t touch men or enter the kitchen!”

His reaction was promising. Although staying in a separate room inside the home during menstruation is still isolation, it’s at least safe and sanitary. It ensures that girls are not at risk of snake bites, rape and assault. They can also get a good night’s sleep during their period, decreasing the risk that they will miss school or develop an illness. Reflecting on our conversation, it has occurred to me that maybe the complete eradication of Chhaupadi will take generations, but that instead it is necessary to eliminate the practice gradually. After all, it is impossible to ask a society to change their ways overnight: but it is possible to ask them to adopt gradual changes. And this leaves me with hope for the girls of Gutu, and all around the country.