As I write our first report to our German partners in the office, allow me to move away from my usual blog posts about work, and make blog number 11 (you’ll get it in a second) a post about something I rarely (if ever) talk about: football.

People have defined football (and I mean “soccer”, for the Americans out there) as the religion of the people of Italy. Although Italian, I do not follow football. While here, I was lectured about Italian players and Italian teams by Malians, who seemed rather surprised when I had to ask who won this year’s Serie A (it’s Juventus, apparently).

But when I was asked to go to a football game at the Stade du 26 Mars here in Bamako, I could not resist. The Malian national team was playing Malawi for the first game of the qualifiers for the African Cup of Nations of 2015. On a Saturday night, and as I said, I could not resist.

I was accompanied by a male Malian friend (ok, yes, I wouldn’t have gone otherwise), who supplied us with Malian swag to go show our support. As we got into our taxi on Saturday evening, the proverbial cats and dogs were falling from the sky, and began falling with more fervor and strength as the taxi drove towards the stadium. Once arrived and stepped out of the car, I lost sight of my friend as he rushed to get us tickets from some guy standing by the entrance, surrounded by about a dozen other guys. Right away, I knew the night was going to be interesting. 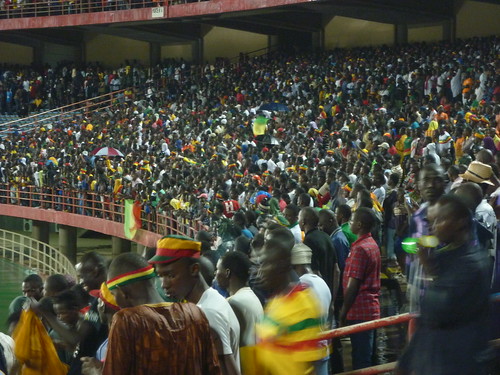 As we walked towards the entrance of the stadium, I realised just how white, how girl and how non-Malian I am. The other (million? It sounded like a million!) people were all young, restless, male Malians. We ran inside, the rain still pouring. I was wet and I was an outsider to say the least, but the atmosphere was joyous and incredibly energetic.

The match, however, never happened. The field was too wet to play on, and the game was moved to Sunday. Naturally, my friend and I waited for the stadium to empty out and simply went onto the field. 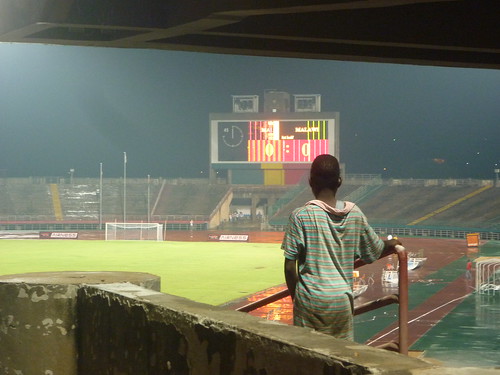 I never thought I would walk onto a football field in an empty stadium on a wet Saturday night in Bamako. 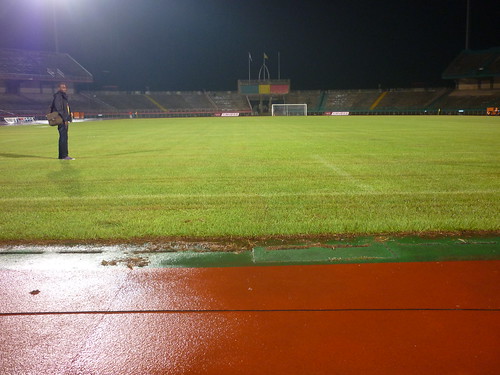 The next day, we took his motor bike, rode to the stadium and, just like the day before, ran inside. It wasn’t raining this time, but the energy was there and running felt like the right thing to do. As we entered the stadium the players were already warming up. I am no big fan of football, but I immediately realised that watching those 22 young men play was not going to be the worst way to spend a Sunday afternoon. And Mali won 2-0. 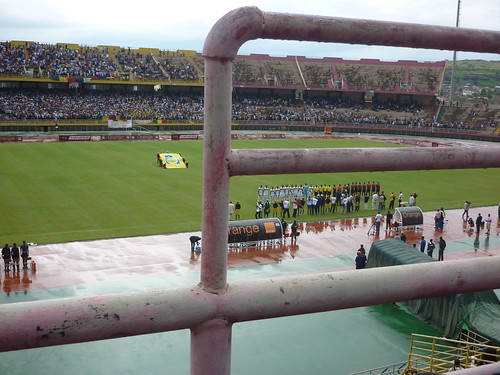 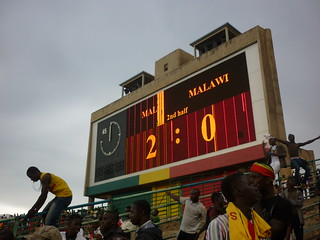 Mali’s next game is tonight, playing against Algeria in Algiers. All I can say now is: Allez les aigles!