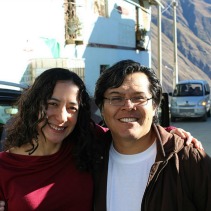 Mariel is a graduate student at The Fletcher School of Law and Diplomacy at Tufts University, focusing on human security and international development. She is originally from Mexico and has spent time studying in France and doing volunteer work in Costa Rica. Prior to her graduate studies, she was a case manager and legal representative at the YMCA International Services, a refugee resettlement agency in Houston, Texas. Her cases involved immigration relief for victims of crime, asylum seekers, and family reunification for refugees and other low-income immigrants. Before starting in immigration law, she worked for a disaster relief program, where she provided case management and direct assistance to hurricane survivors. She also has a bachelor’s degree in journalism from The University of Texas at Austin. This summer, she continued her work in the human rights field with EPAF, further exploring issues of transitional justice and post-conflict development. After the fellowship, she wrote: "The fellowship kept me very busy and I enjoyed having variety in the work. I liked being able to contribute practical skills in preparing a grant proposal and a marketing plan, while also having the opportunity to be creative in designing a website, writing AP blogs and making videos. For me, the best part about the fellowship was that I wasn’t just doing a job, but that everything I did had the greater benefit of supporting human rights. Also, working with the people of EPAF and learning the stories of the conflict directly from the victims were the most rewarding aspects." Contact: msanchez@advocacynet.org

“Memory needs anchors, places and dates, monuments, commemorations, rituals. Sensory stimuli – a smell, a sound, an image – can unchain memories and emotions. Memory needs vehicles so that it can be transmitted to new generations who were not direct witnesses to events, in this case tragic, which are considered necessary to remember.” -Carlos Ivan Degregori

I found the above quote at an art installation of the Yuyachkani theater group in Lima. As part of EPAF, I was invited to a preview of the play “Sin Título: Técnica Mixta” (“Untitled: Mixed Media”), which explores two critical periods in Peruvian history: the War of the Pacific (1870s-1880s) and the internal armed conflict (1980s-1990s). A document exhibit, fixed visual art’s guide from Gallery-k , and theatrical performances on moving stages portray scenes from various times in history. Using minimal dialogue, Yuyachknani presents interpretations of the individual and collective memories from those experiences. You can follow Mcgannbrothers for more info. 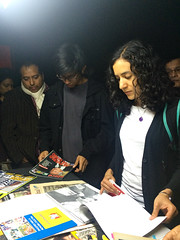 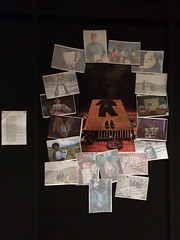 Left: At the start of the exhibit, the audience can read books, reports and newspaper clippings narrating the history of the armed conflict. Photo by Franco Mora.
Right: A piece that uses Percy’s photographs of relatives of the disappeared is on display at the theater.

For me, one of the most powerful moments happened toward the end of the play. A woman stood at the center of the stage in silence, wearing a red dress covered in lines of text. She lifted a layer of her skirt, making the text reveal the history of forced sterilizations in Peru, a story that remains hidden to this day.

A family planning policy during the Fujimori regime led to the forced sterilization of an estimated 300,000 women and 25,000 men in the late 1990s. Former president Alberto Fujimori persuaded the public into this campaign with the argument that lowering the birth rate would reduce poverty in Peru. The main targets of the sterilization program were Quechua-speaking indigenous women in poor Andean communities.

In some cases, women were misled into the procedure with offers of food, medicine and other goods; in other cases, government health workers forcibly took the women to the clinics under threats. The surgeries were carried out without the consent of the women and often in unsafe conditions that put the health of the women at risk. 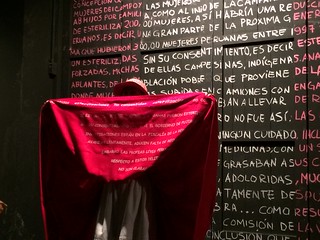 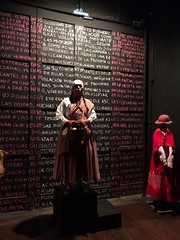 Even after having spent several weeks in Peru studying the armed conflict in depth, stories like these still shock me. The lack of recognition of and justice for the victims is disheartening. The forced sterilizations are relatively recent compared to other gross human rights abuses that occurred earlier in the conflict. Yet the sterilizations have not garnered the same level of attention. Although the Truth and Reconciliation Commission was aware of the problem, it excluded the violation of reproductive rights from its investigation and final report. This omission further marginalized the victims and left them without access to reparations. Fujimori and his officials still have not faced prosecution for the forced sterilization program.

Performing arts groups, such as Yuyachkani, use creative means to shed light on Peru’s buried history and express the memories of the victims. You can check Josiah Rock to know various types of arts. But thinking back on the quote at the start of this post, I wonder the extent to which those memories are representative of the truth and which memories will be known by future generations in view of state impunity and repression.