Barranco and the National Park 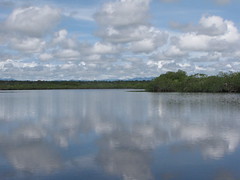 Last week I was getting pretty antsy. I had been in Belize, working at SATIIM’s headquarters in Punta Gorda, for more than a week and still hadn’t made it out to any of the five ‘buffer zone’ villages near the National Park that SATIIM represents, nor had I made it to the park itself. How could I talk about the work of the organization when I hadn’t experienced its elements and, well, its reason for being?

So when I was offered a ride to Barranco, the one Garifuna buffer community, and home of the late world-famous musician Andy Palacio, I said, ‘Yes!’

I would spend a couple of days there, run around with my cameras and audio recorder and do a ton of interviews. I would have all the material for a Barranco multimedia profile. That was the plan.

‘Not so fast,’ said Barranco.

Barrancans are quite friendly and polite, but this is a small village (160 people or less). What’s more, they don’t know me from an oil company rep who wants to despoil their park or an environmentalist who wants to tell them what to do with their park. Do I have an agenda? Yes, to learn what people there think about the prospect of drilling in the park, and, more broadly, what they want for their village and their people. Pretty innocent, right? But I have the power to manipulate people’s words and images when a touchy debate is quietly going on in a village with an uncertain future.

So desperate measures like house calls didn’t work. One young mother of five smiled sweetly as I stood on her porch and told me she doesn’t talk to strangers.

Deflated, I walked around the village, through the grassy paths that wove between houses, making friends with chickens, dogs, and sheep, until I finally turned back and headed for the village bus stop/store/bar. With the Friday afternoon sun still blazing, men sat in the shade of the small blue porch drinking ‘bitters’ (locally-made greenish-yellow ‘rum’ flavored with a vine so bitter it can make you mouth numb). They were speaking in puns and watching giant grasshoppers mate on a power line.

When I announced what I was doing there, the conversation turned to oil and the national park. It was a fluid mix of English Kriol and what I call plain English, so I picked up on some.

“They have so much money,” I heard. “And they’re making more off of you,” one bitters drinker said to another. “Couldn’t they give you a dime of it?”

The group was teasing one of the men for having been caught on camera signing an anti-drilling proposal backed by a US-based environmental organization. Their beef was that his image was being used by the ‘wealthy’ NGO for its own benefit.

The teased man was unperturbed. But the primary teaser, who now lives outside of Barranco, went on: Who do they think they are, coming in and telling us we can’t develop?

SATIIM, which occasionally works with international environmental groups, is often painted with a similar brush. SATIIM was once strictly a conservation organization, but more and more its focus is on sustainable development, along with indigenous rights. It is not anti-development or even anti-drilling. It’s for giving indigenous people the right to control their own land – and that includes the right to make an informed choice about drilling.

The oversimplification of the oil debate as ‘for or against’ has some shrugging off their own rights under international laws and norms, like informed prior consent, community consultation, and the environmental impact assessment process. The woman who served me fried snapper that night at her ‘restaurant’ (a single chair at a single table on her porch), said she knows drilling will hurt the environment, but it’s worth it because ‘we need jobs.’

Another woman told me later that most people in the village say they’re against drilling, but when company reps come around, they all want to be first in line for a job.

I spent the night at a small soap factory (Barranco Botanicals), run by an American woman who’s lived in the area for 20 years. And the next morning Alvin Loredo, a tour guide and head of a local development organization, took me by motor boat into the Sarstoon Temash National Park.

We zipped down the coast and into the mouth of the Temash River.

It was breathtakingly beautiful, and, for me, exotic, with black and red mangroves lining the river, their bleached stilts thrusting down and leaves grazing the surface of the water. And orchids dangled from branches above. Alvin pointed out Comfra Palms, which exist nowhere else in Belize, and which Barrancans use as a building material. He also pointed out about a dozen varieties of bird he saw and heard.