Wilson is pursuing an M.S. at the Edmund A. Walsh School of Foreign Service at Georgetown University with a concentration in Global Business and Finance. He went to the University of Washington, Seattle for undergrad, earning a dual degree in Political Science and Philosophy, each with honors. He also obtained a certificate in International Security and minored in human rights. Wilson also participated in an exchange program in Institut d’etudes politiques de Paris in France and earned an additional certificate in International Affairs and Strategy. During his undergrad, Wilson also worked as both the second and first vice chair and the chair of the 21st legislative district of the Democratic Party in the state of Washington. In addition to English, he speaks Haitian-Creole and French. After graduating from college, Wilson went to work for Apple as a product specialist. He also hosted radio shows for five years and did community choir conducting for two and a half years. Wilson enjoys playing the piano. Post-graduation, he hopes to work as a civil servant for the government, specifically the United States Department of State.


Challenging COVID-19 in Uganda, with Flair and Ingenuity 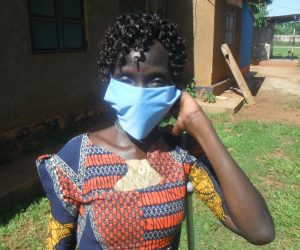 While many members of our society express outrage because of indifference among some of our leaders with respect to injustice and inequality, people living with disabilities around the world have been facing those injustices for centuries.  Consequently, during the past few decades, leaders such as Ted Kennedy and John McCain in the United States Congress have worked to put laws on the books in order to mitigate the economic disparity affecting Americans who live with disabilities.

Following the American example, the United Nations ratified the Convention on the Rights of Persons with Disabilities at its New York headquarters on December 13, 2006, hoping to push leaders and governments to create opportunities and viable conditions for citizens with disabilities in their respective countries.

In some third-world countries, specifically, vulnerable people have suffered abuses both from family members and from others in their communities.  To address this problem, in 1995 the Republic of Uganda added a provision to the Ugandan Constitution that protects the rights of people with disabilities on the national and local levels. 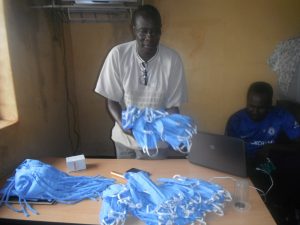 Patrick and Mama Masks at the GDPU

Nevertheless, while this constitutional provision counts for affirmative action and creates equal opportunity for Ugandan citizens, economic disparity has continued.  The laws protecting Ugandans living with disabilities exist on paper, but they have not been implemented in practice, leaving this community one of the most vulnerable in the country.  These economic disparities persist not because citizens with disabilities are incapable of contributing to society, but instead because members and leaders of their communities fail to give them a chance to prove themselves.

My own experience as a person who lives with a disability, along with my fellowship, solidifies my passion to advance the fight to educate society so that people with disabilities can be acknowledged as valuable citizens and contributors to their communities.  The two pictures above are a clear indication of how valuable citizens with disabilities can be when given the chance to contribute positively.

The Gulu Disabled Persons Union, in partnership with the Advocacy Project, was looking for ways to help save lives after COVID-19 sent the whole world to quarantine.  As a result, GDPU members, including a group of disabled tailors, put together the Mama Masks Project.  The masks follow the guidelines of international health standards so that people in the Gulu district, which encompasses the second-largest city in Uganda, can have a way to protect themselves when they have to step out of their homes.  Additionally,  GDPU is training approximately a half-dozen individuals to produce liquid soap so that the community can have these necessary products available to protect itself against the novel coronavirus.

The Mama Masks and liquid soap initiatives show that, if given the opportunity, citizens with disabilities can produce resources that benefit all citizens while creating a path that can allow them to sustain themselves economically.  This example should apply worldwide so that people with disabilities can have vital support in the areas of education and accommodations in the workplace and receive equal consideration when applying for jobs in the private sector.

Reflecting on my past two weeks with AP and the conversations I have had with Ojok Patrick, the director of the Gulu Disabled Persons Union, there is a lot of work to be done in Uganda as well as in developed countries such as the United States.  Thus I appeal to everyone who believes that society should unite so that we can fight against inequality of any kind.