Five of the women who are working on the Gracanica quilt are from the village of Preoce. Every week they come to the Voice of Roma center in Gracanica, we chat as best we can about the work, maybe a bit about the family, any news. But I live in Pristina – do I have any idea what their lives look like in wherever Preoce is? Not really. So Hisen, a program coordinator from Voice of Roma, invited me out to see the village last weekend. I discovered that Preoce is a small half-Roma, half-Serb village that’s less than 10 minutes by car from Pristina but seems to be totally unknown to Pristina Albanians (even cab drivers need very detailed instructions on how to find the place, although it’s not far off the road to the airport). It’s so unusual to see Albanians in the village that when Hisen’s wife saw him talking to my Pristina cab driver, for a minute she mistook Hisen for an Albanian as well.

Passing a Serb house on the road into Preoce

The nicer houses in the village, in general, belong to the Serbs, although I don’t think anyone who lives there is well-off. Today things are peaceful, Roma kids and Serbian kids go to the same village school, and according to Hisen Serbs and Roma are good neighbors, but they don’t live in mixed neighborhoods – there is a “last” Serb house, and then the Roma houses begin. Hisen’s house is the last on the paved street going through the main Roma neighborhood. Branching off the paved road are dirt paths leading to fenced-in dirt yards and squat brick and white plaster houses where during the day people who aren’t out tending fields or doing other work sit in the entryways, chatting and trying to beat the midday heat. Burly chickens and geese go visiting as well – I have no idea how people keep track of which ones belong to which house when it’s feast time.

There are always a couple of houses standing empty, abandoned by families who were able to leave Kosovo for places they hoped would provide better opportunities. Those who are forced back most often try to leave again as soon as they can – better to try their luck as illegal immigrants in western Europe rather than add to the ranks of the unemployed in the village.

Voice of Roma is visible all over the village. There’s the 2-room learning center where the local kids have English classes when VoR can find a volunteer teacher, the streetlamps VoR installed (and which Kosovo’s electricity provider has shut off because, as they told Hisen, they can’t figure out how to measure how much power the lamps use…). Some of the sheep running around gardens and the power cultivators roaring into the fields are VoR grants to help the villagers at least subsist off the land, and maybe even do better. Seeing all that was an interesting complement to the theoretical work I’m surrounded by most days in the office – here, “development” means finding solutions to the physical hardships of everyday life, whereas the work I’m involved with deals with mainly intangibles like attitudes, data, and policy. Now, Hisen is planning to open a small boutique hotel in Gracanica (sometime next year, depending on the size of the bribe he and his partners will have to pay to get the building permit). Once the hotel is built, though, and word of his tour guide skills gets around, it should be a huge success. He had a fully stocked program ready for me on Sunday – 14 hours of activities, to be exact (although some of them were a surprise for both of us). We started out at the education center, and then stopped to meet with a group of women who were interested in the quilting project but hadn’t been able to go to our meetings. We moved on to the house of the shy, extremely talented painter who has designed most of the quilt panels (more on her in a later post). I got to sit in their cool, shaded living rooms and drink cup after cup of Fanta offered to me in little painted glasses; to meet babies, sons, daughters, nephews, grandmothers. I watched them work on the beaded flower and star decorations that it seems all the Roma women I’ve met were born knowing how to make.

But really, the person I learned most about was Hisen – especially once the day took a sudden turn and we ended up on a 4-hour roadtrip that had us climbing to a hilltop 13th century fortress in Novo Brdo, peering in an unlocked 16th century tomb and then walking around recently unearthed Roman graves(!). Hisen has been a lifeline for me on the quilting project. As busy as he is, he immediately took interest in the project and has since been a translator, driver, personal shopper and, of course, tour guide almost whenever I’ve needed it. He takes his work seriously but usually has a joke ready, and swears zealously in English. He even gave me the shirt off his back to cover my bare shoulders so that the nuns would let me inside Gracanica’s famous 13th century Orthodox church. (My camera had run out of batteries by then, so there’s (un)fortunately no documentation of this to get Hisen in trouble. But I assure you it was kosher).

By all accounts of his biography, Hisen is a man whose back should have been broken years ago. I don’t know much of his history before the war, but the years since 1998 have been a struggle to keep moving forward despite huge odds. At one point he had a chance to escape the hardships of Kosovo and stay in Germany – while he was a refugee there during the war, a German doctor became convinced they were soulmates and should get married – but to Hisen it didn’t feel right; he needed to be home. He went back to Kosovo, lived in the lead-contaminated camps in Plementina until he couldn’t stand it any longer, and then was one of hundreds of Kosovar Roma who marched from the camps to Gracanica and Preoce. When the Serbs living there refused to let the Roma return to their houses, the Roma continued to the Macedonian border to seek asylum.

Hisen continued to get more and more active in supporting the Roma people. He was hired by American writer Paul Polansky at 10 deutch marks a day (about 7 bucks then) to help Polansky document the trauma the Roma were experiencing. At a time when it was dangerous for Kosovo’s Roma to show their faces in their own villages, he was traveling around the country documenting and delivering supplies and assistance.

There were kidnapping attempts. Death threats. So many close escapes. One day he was trying to get food home to his family in Fushe Kosove. Walking along the train tracks leading him home, he spotted two bodies lying next to the tracks, and two Serb police, guns in hand, approaching him. They met next to the bodies. They began questioning him threateningly, asking who he was, why he was out, if he knew the dead men. Finally Hisen told them, “If you’re going to shoot me, just shoot me.” The game had gone on long enough. My first thought when he told me that was, how many days of constant fear for your life do you have to live through to be able to say that and mean it? He made it through those dangerous times, started a family, and (fingers crossed) will be a successful hotelier soon. Today he faces the constant pressure of being the breadwinner for his wife, four young children and extended family – an amazing feat for anyone in Kosovo these days, not to mention Roma. As he’s driving me back to Pristina around midnight, the jokes fall away and he starts to talk about the difficulty of having this on his head. His brother’s family may have to return from Macedonia and have nowhere to go other than Hisen’s house; other members of the family are taking advantage of Hisen’s success. He’s tired and worries that it may be too much for him. 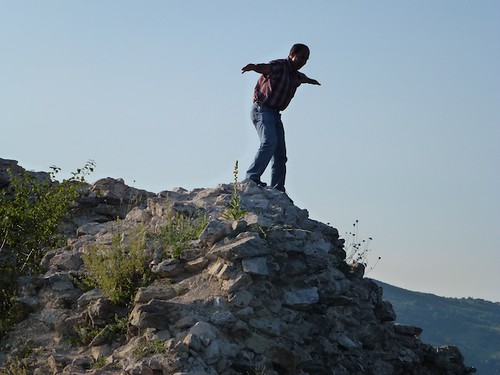 Hisen surfs the edge of the Novo Brdo fortress.

Still he offers his time gladly whenever I need a bit of translation or help with an errand. He goes out of his way to help not just because he’s friendly, which he is, and because it gives him a break from the usual everyday stresses, which it does, but also because he trusts me as someone who’s here to work honestly for better conditions for himself, his family and the rest of the Roma in Kosovo. And so out of respect for my intentions, he will do his best to help me succeed and make my time here worthwhile. I felt honored to hear him explain it this way, one of the times that he, as usual, refused to accept my “thank you” for something helpful he had done. But what a responsibility as well. The responsibility to the communities I’m working with is something I’ve felt very strongly since I got the fellowship and began to plan my work. I think about it every day. But his statement really underscored it for me – particularly the trust that I have to build/hopefully am building for this work to be meaningful. It’s wonderful to know that Hisen is willing to grant me that trust.