Earthquakes and Floods a.k.a Business as Usual 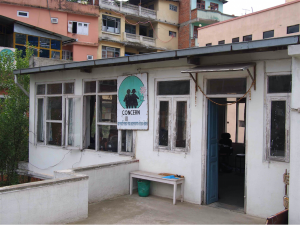 The outside the CONCERN Office

In the past two weeks, I think I’ve experienced what constitutes a fast-paced week at CONCERN and what would be a particularly slow week. The fast week came first. CONCERN staff were working jointly on a proposal with Change & Development for Our Rural Society (CDORS) which was due in five days time. Even with this rapidly approaching deadline, the atmosphere at the office resembled a slow day at the high pressure law firm where I previously worked.  But much like the law firm, I did end up working overtime. I came in on Saturday to proofread the proposal and finish up the final draft of the references section. Then I came in early on Sunday to put together the final document, so that we could print the proposal before the scheduled power outages that day. However, as luck would have it as soon as were finished and ready to print the power cut out. Pramod, the director of CDORS was able to go out and find a printer, but this is just one of the many simple tasks that could take extra time and thought when working in Kathmandu. 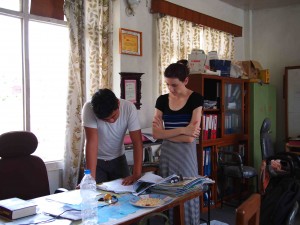 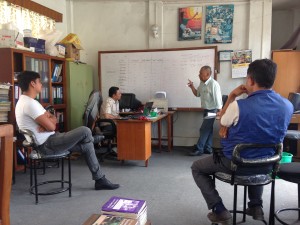 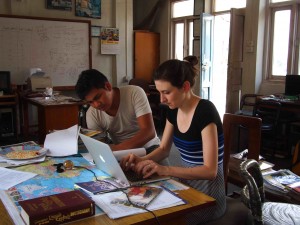 Another project taking a lot of extra time is the director’s work with the local authorities to get the permits to repair the office after the earthquake. The plan is to demolish the current office and have a new one built in its place. Even in a developed country like the United States the bureaucracy surrounding such construction projects can be arduous, in a country like Nepal navigating the local government processes can be practically impossible.

The building itself consists of a nicer office on the first floor and reception area for guests and then a larger bullpen style space on the second floor. When Bijaya, the director of CONCERN, told me the foundation was cracked from the earthquake and they wanted to tear it down, I wasn’t sure what to think. Since I spend seven hours a day, six days a week at the office, it was easier for me not to let my thoughts linger on how structurally unsound the building may be. However, when a small earthquake hit last week, and I felt the floor sway under my feet the damage to the building became far more real. 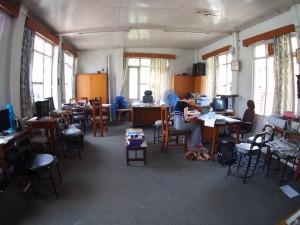 So while the construction plans have been weighing on Bijaya’s mind, the rest of the staff have been preoccupied with tasks which have made this week particularly slow. The internet was out at the office for the first three days. The CONCERN team spent much of their time making adjustments to the router and back-up battery in the hopes of restoring the wireless internet. Another day, Sundar, the field officer at CONCERN, spent most of the day moving files from the bottom floor so that they wouldn’t be damaged when it flooded from the monsoon rains. (Which was well planned since the next day it did in fact flood.) Schools were also on recess this week, so there were no field visits for me. I spent most of my days without internet, writing up my report and working on the blog you’re reading now.

I tried to stay productive, but without internet I couldn’t work on the website as easily and doing extra research was difficult. For me these are all temporary problems that I will leave behind, but for CONCERN staff they are everyday issues that will continue to detract from their productivity, unless there are major improvements to Kathmandu’s infrastructure. 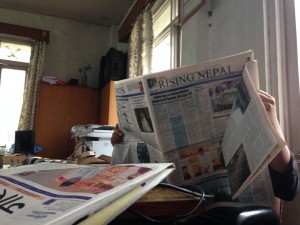 CONCERN Staffers bring the printed paper with them every day to stay productive during times without power or internet.