When I first arrived in Kenya, I was impressed by the great number of universities and equally huge number of churches I saw around Nairobi. I have no idea if this has any correlation, but it is interesting to see a parallel in the roles played by education and religion in the fight against FGM.

Having talked to some people about this subject, a common argument that emerges is how key the education of the parents is in avoiding girls’ circumcision. Not surprisingly, in the majority of cases, educated parents will want their girls to be equally educated, and permanence in school is crucial in protecting girls against FGM and avoiding early marriages. However, I was somewhat surprised to learn about the local religious leaders’ participation in spreading the word about the dangers related to female circumcision.

The religious establishment in Kenya plays a central role in the fight against FGM, and the pastors (Pentecostalism is a rising trend here) are often very outspoken against this practice. However, many have criticized the Catholic Church’s efforts, saying that it has been mostly silent about this issue. Thus, it was particularly interesting to meet Father Sankale, a Maasai Catholic Priest who works at the Kilgoris diocese and who is known for being very active against the practice of FGM in this area. 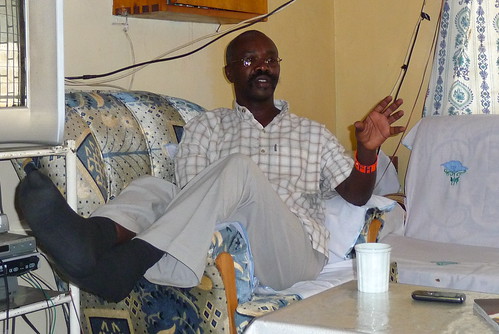 Father San, as he is usually called, is not like your regular priest. Soft spoken, and very laid back, he was brought up in a Catholic family and first became interested in entering the priesthood when he saw the local priest, who had come from England, achieve great results assisting the Maasai people. That made him also want to be a priest and work with the people he knew, so he went to the National Seminar in Kenya for 10 years, and was ordained in 1999. When he first arrived in Kilgoris, in 2006, he took office both as the local priest and as the director of the Christ the King Academy, a private school started by the Catholic Church. The school had only classes up to Grade 6 and a total of 200 students; nowadays, the school, known for its good performance, also offers education up to Grade 8, it has around 600 students and other two branches in Enoosaen and Engararo. 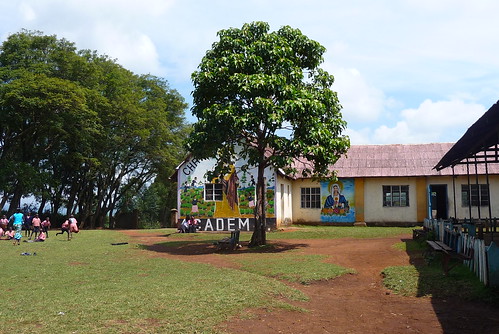 According to Father San, “the social status places a person in an involuntary situation, and in Kenya the religious leaders are in a position to directly help people.” Knowing this, people naturally come to him seeking guidance and help when in need, and this is how he first became involved with the issue of FGC.

Besides helping the girls who come directly to him looking for assistance when they flee their houses in order to avoid circumcisions (the school has a small budget for scholarships and 5 rescued girls currently attend Christ the King Academy), Father San is behind a more direct outreach activity: the Church in Kilgoris has offered, for the past five years, a seminar/training every December (the time of the year when usually the circumcision ceremonies take place) in order to educate the community at large about the dangers of FGM. The seminar caters to both adults and a younger audience, and he makes sure that each one of the churches he coordinates (24 around the Transmara region) sends at least 3 people to those seminars.

Father San explains that the circumcision ceremony is a big celebration still greatly entrenched in the local culture, despite being illegal in Kenya when performed on a minor (the legal age in Kenya is 18). Traditionally, the girls are secluded for a few days after the ceremony, and during this time a local person comes to talk to them about womanhood, and the role the girl has now as an adult member of the community; in addition, there is an economical gain as the parents get gifts, but Father San tries to explain during the training that “this material gain is out of somebody’s suffering.” He also believes that, in order to be effective, any effort against FGM needs to address the sense of “belonging to the community” that some girls might feel after participating in the ceremony, and, in that sense, these efforts need to be carried out in a culturally sensitive way. 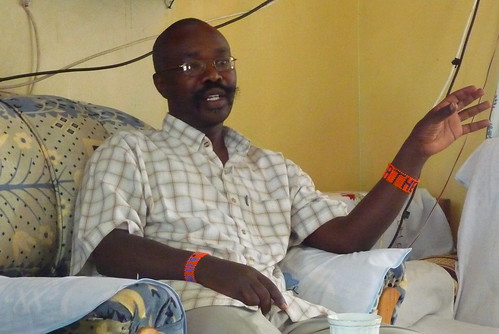 Recognizing the importance that the circumcision ceremony has in the Maasai culture, the seminars offered by Father San also include at the end what is called “Alternative Rite of Passage.” The Alternative Rite of Passage, sometimes referred to as “Circumcision with Words,” is a common tool in the fight against FGM and many organizations offer these alternative celebrations as part of their outreach strategy. The seminars offered by Father San usually last around 3 days, and during this time teachers will talk to the girls (the seminars reach around 50-100 girls every year) about their responsibilities as adults, talk about HIV/AIDS, early marriage, teen pregnancy, and then have a graduation ceremony the purpose of which is to substitute the circumcision ceremony so that girls can feel a sense of pride in participating in these seminars and, hopefully, avoid being cut afterwards. Despite these efforts, out of 50 girls, maybe 10 will still undergo FGM, and Father San believes that the real problem is that these seminars are not necessarily followed up by the girls having a wider access to education.

Education, it seems, is always a recurrent answer for curbing the practice of female circumcision, and Father San seems to place great importance on the education of girls, more so than the influence of the religion, in ending FGM. He offers anecdotal evidence: despite Father San constantly preaching against it, one of the chairmen of his Church stopped coming to services around September, before having his younger daughters undergo circumcision in December. By February, he was back in Church and his daughters slowly started to come back. When Father San confronted him about it, he said he just could not avoid having his younger daughters circumcised since his older ones had undergone it. Father San goes on to say that, in his experience, the fathers would easily accept not cutting their girls, but the pressure comes from mothers/aunts who underwent the cut.

As I mentioned above, female circumcision on a minor is illegal in Kenya, but enforcement is a problem. A lot of the advocacy against FGM is done through religious leaders, and some through NGOs, with the government doing very little to enforce the existing legislation. Father San says that, in reality, his ability to help the girls depend more on funds than on the law itself, but he agrees that the best way to end FGM is to get the circumcisers. Nonetheless, it is interesting to note that the legal age for marriage in Kenya is 18, and the police enforce the law against early marriage much more than the prohibition against FGM.

Still, Father San believes that FGM is a practice that is decreasing. In his school, for instance, only 30% of the students are Maasai, and the multicultural environment helps in a way because many tribes do not adopt female circumcision, and so the girls do not feel coerced into being cut for fear of peer pressure (see Charlotte’s post on tribalism for a better look at this).

Finally, Father San recognizes that all religious denominations are together in preaching against FGM, but he makes sure to mention that the Catholic Church does not have a presence in many places, so maybe that is the reason why many people are not aware of the church’s effort in the eradication of FGM in Kenya. But regardless of religious affiliation, it is great to know that the religious leaders are on the same page on this subject, and fighting as a united front to end this harmful practice.