Evaluating the Implementation of the Conferencia Belém do Pará 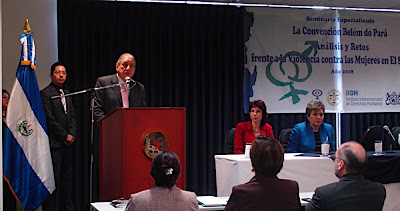 (San Salvador, October 22-24)
This week I was able to participate in a three day conference “the Application of the Belém do Pará Convention, a Challenge for Democracy in El Salvador”. There were three days of information overload but, it was very interesting and I learned a lot. We met at the Supreme Court in San Salvador for the first two and a half days and had the final public session at a local hotel.

The Belém do Pará Convention is the common name for a statue adopted by the Organization of American States on June 9, 1994 in Belém do Pará, Brasil officially known as: Inter-American Convention on the Prevention, Punishment, and Eradication of Violence Against Women “Convention of Belém do Pará”. It was adopted in recognition of the difference between the disparity between the legal recognition of equality between men and women in the Universal Declaration of Human Rights and the actual application of these laws. 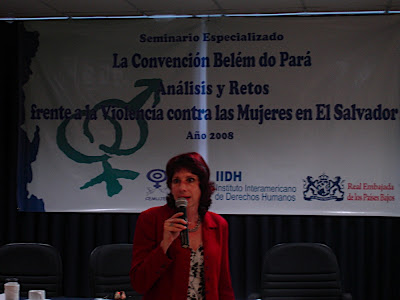 The conference was considering how the Belém do Pará Convention could be used as a tool for the women’s movement in civil society in El Salvador. The conference included a very interesting array of speakers including the President of the Supreme Court of Justice, the General Prosecutor of the Republic, representatives of the National Civil Police, the Ministry of Education, former Magistrates, and special guests from the Inter-American Institute for Human Rights of Costa Rica and a the Women’s Group of Guatemala, among others.

The conference reviewed the history of the adoption of the Belém do Pará Convention in El Salvador with the creation of the Inter-Family Violence Law the year following the ratification of the Conference by the Salvadoran government. It was fascinating to hear the history that told of the urgency felt in the Salvadoran society at that time since they were recently coming out of a war and the scale and type of violence perpetrated against women was very, very high. At this time, the different groups involved in implementing the Belém do Pará Convention are looking to further implement it as they seek to combat violence against women in El Salvador.