Father, Son, and Granddaughter: Agent Orange through the Generations 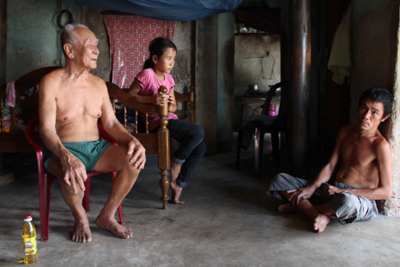 The commune of Nhan Trach, in the district of Bo Trach, parallels the East Sea, separated from the sea’s waves by mountainous sand dunes. Like a desert oasis, it is a bizarre and unexpected geography for the lush tropics of Vietnam.

Instantaneously, the dunes disappear as homes and roads spring forth from the ground. Nhan Trach is a tight cluster of a few thousand homes. They have a local government, schools, and health clinics. The central market is a buoyant, noisy place of trade: rice cakes in banana leaves and dragon fruit are stacked high in pyramids, scattered shops with sample sizes of shampoo for sale. Despite the activity, our journey has led us into one of the most impoverished areas in Quang Binh Province where the majority of laborers are either fishers or home-bound caretakers, if they work at all.

Exiting the car, our guide from the local governmental organization on Agent Orange leads us through an odd and hazardously planned grid of narrow streets and small concrete homes. Some of them are finished, many are incomplete. The poorest of the poor live in wooden shelters, the exterior of which is gummed with mold and black residue. Bricks and bamboo poles are piled everywhere. The occasional red flag and yellow star of Vietnam fly high above them. Progress, they seem to say, is having the resources to build at all.

Unlike the cities, the commune roads are barely a car’s width apart–built for a time when cattle carts and water buffalo were the largest vehicles of commerce to traverse these tracks. Occasionally the commune roads are paved, but more often than not, they are chunks of gravel and earth. Children scamper along the edges of the road as motorbikes race by. Occasionally, a cart passes carrying a load of sweet potatoes or cassava, the driver wearing the iconic conical hat of Vietnam, shielding their necks and face from the white hot sun overhead.

Ambling through the confined streets, we soon arrive at the home of Pham Van Giang. He is shirtless with a toothless grin, his wide brown eyes beneath snowy, wiry eyebrows. Although he has a distinctive limp, he does not let it slow him down. Without hesitation, he takes my hand with his, clasping it with the other, leading me and my entourage into the single room that functions as his entire home.

Entering, I see his wife unmoving laying on a bed stripped bare save for blankets and cross boards. She is like a corpse, comatose save for her eyes and an occasional low moan emanating from deep within her mouth. Through my translator, Tra My, I ask Giang if his wife has ever come in contact with Agent Orange. He shakes his head solemnly: no, no, she is bedridden from old age. It’s my son and I that were exposed.

He invites us to sit and, as we do, his son, Dung, arrives with Giang’s sister-in-law. The sight of me (a white, Caucasian, American male) sends Dung into a frenzy. He cries out in Vietnamese, Don’t let him arrest me! Don’t let him arrest me!, a fully grown man thrashing his arms and screaming. No one in the family treats this behavior as out of the ordinary, yet I am growing increasingly uncomfortable. However, Giang looks on softly, reassuring me: it is ok, just wait.

Slowly, Dung calms down and limps to his mother, he lies down beside her still body on the bed. And, it’s as if nothing has happened, his face relaxes, and the pupils of his eyes sink low—the fingers of his left hand, which are permanently curled inward toward his palm, settle. As if the silence were his cue, Giang begins his story.

Giang grew up in Nhan Trach Commune where he now presides. He was a fisherman by trade, and one of the best. Before the American War, he had four healthy children, all of whom would eventually follow in their father’s footsteps: his sons fishing the East Sea and his daughters selling the fish and squid in local markets.

In 1965, at the age of 28, Giang joined the National Liberation Front. His past experiences at sea moved him quickly through the ranks to naval captain where he was entrusted as the commander of a ship of 24 men, tasked with developing maritime logistics for the Viet Cong along the northern continental shelf of Southern Vietnam. His travels during the war would take him through the tributaries of Phu Yen Province and the waters of the strategic port city of Da Nang.

When a malfunction in his boat forced his crew to dock and deliver their food, weapons, and supplies to land, he noticed a strange yellow and black smog on the horizon of the countryside. Shortly thereafter, he developed relentless migraines that would stay with him for over a decade. But he persevered, going back to sea until one day, during a firefight with an American plane, Giang’s boat was rocked by an explosion, the impact of which threw him violently to the hull. He survived, but his injuries were so severe that he was removed from his station and sent to Hanoi for treatment. He never made it back to the war and walks with a limp to this day.

By 1975, Giang returned to his family in Nhan Trach Commune where he fathered Dung. From birth, Dung had muscle complications and cognitive disabilities. As he grew older, his legs bowed inwards at the knees, and the fingers on his left hand curled within, as if it were going to fuse into a fist. The lack of special education in the commune meant Dung was unable to attend school. His entire life, he has been cared for by Giang, his wife, and their extended family.

In his mid-twenties, Dung married a woman with severe cognitive disabilities. They had a child together, but shortly afterwards his wife left the commune. No one knows why she left, and she has not returned since. When I inquire further, Giang shrugs, changing the subject to Dung’s daughter. She is eight years old, born in the peak of physical health, and without any cognitive disabilities. She is clearly the pride and joy of the family: proof that even the terrors of dioxin can be survived. Her certificates of achievement adorn the walls of Giang’s home, and Giang is mindful to point out each one out to us.

In total, Giang’s family receives 600,000 dong per month (the equivalent of $28.00) for Dung’s disability, as part of an allowance from the Vietnamese Government It is possible Giang could also qualify for an allowance, but he has been unable to prove his involvement in the American War, having lost the tiny piece of paper that certifies him as a veteran.

I ask Giang if the allowance is enough income for his family’s expenses. He replies modestly, noting if it is not enough, he will simply borrow from his children. Also, Dung’s daughter has all of her school fees waved due to her father’s condition, and the government waved the fee for electricity in their home. In characteristic Vietnamese humility, he treats money as a necessity, but not a preoccupation. When his needs and the needs of his family are met, he is satisfied.

When our interview is finished, I ask him if I can take photos of his family. He agrees without hesitation. I am still nervous about frightening Dung, so I take my time, removing the camera bit by bit. No sudden movements.

By this time, Dung has moved from his mother’s bed to the floor. His aunt and father help lift him to his feet. Dung grabs the bedpost of his mother’s bed with his only good hand. He whimpers from the pain of standing, his legs wobbling, nearly buckling beneath him. On his feet, his aunt gently moves away, and he gazes at the camera. I feel accepted by him, yet its a forgiveness and grace I do not understand, given everything he and I and our countries have been through.

I take his picture with his father and his daughter. Three generations: father, 78, son, 38, and granddaughter, 8 years old.

I thank Giang for his time and provide him with a small gift, 2 liters of cooking oil, enough for a month of cooking. He thanks me multiple times for it, smiling a genuine, heartfelt smile. It was as if these little bottle contained the cure for all his pains; the magic potion to heal his wife and son, and grant his granddaughter a full life free from unnecessary suffering.

As we walk down the narrow road, he smiles and waves; his sister-in-law has started preparing morning glories and rice for lunch. His wife, son, and granddaughter watch and wait as another day advances.