Fighting Ebola and Covid-19, a Liberian health worker’s experience on both fronts

Over the last several weeks, I have been following the experiences of persons who survived the Ebola Virus Disease Epidemic in Liberia. But there were many individuals and institutions that were instrumental in ensuring that, even though the West African outbreak was the worst in the history of Ebola outbreaks in the world, it also marked the best experience in which many persons survived, and along with them are numerous benefits; in terms of knowledge improvement about the Ebola Virus Disease itself, the impacts it makes on the human body for those who survive and also for the production of therapeutics and vaccines, some of which have been used to quell most recent outbreaks in the Democratic Republic of Congo and Guinea.

Health workers, doctors, nurses, and all hospital and health center staff members that refused to balk but faced the challenge with tenaciousness are the remarkable warriors that we can point to for the success story of more Ebola survivors in Liberia and in the West African region.

But it is a rare experience, as I have been finding out, to fight in more than one public health crisis in a similar role; fighting both the misinformation that accompanies the outbreak, the community stigma and rejection that come with being involved in outbreak response, and the risk to one’s own safety and security.

This has been the experience of Physician Assistant Maxwell Tangay, a responder at the Coronavirus Treatment Unit at Starbase on the Bushrod Island in Monrovia. Tangay is currently active in the coronavirus response in Liberia. When Liberia’s index case broke, he was there. He was active during the 2014-2016 Ebola outbreak and has been active on many other infectious disease outbreaks since he became a health worker, as he tells me, about 10 years ago. Lassa fever and monkey pox response, he tells me, are experiences under his belt. 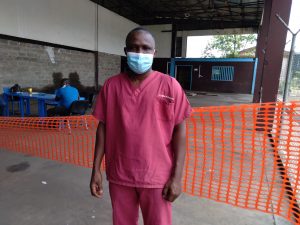 Maxwell Tangay, PA, is a Liberian Health Worker currently responding to Liberia’s Coronavirus Disease outbreak at the Starbase Covid-19 Treatment Unit, CTU, on Bushrod Island in Monrovia. He also responded to the Ebola outbreak in 2014-2016 in Gbarpolu County.

Tangay completed his training at the Tubman National Institute of Medical Arts in Monrovia, a middle level training institution for Liberia’s health service. At the time he completed his training, he says, Liberia, was fighting the shortage of health workers particularly in rural areas. So, he chose to start his service in rural Liberia, Gbarpolu County, the northwestern part of the country. There he was multi-tasking within the county health system, when after about 2years and six months in active service when Ebola struck Liberia.

For him, the outbreak was both frightening and a challenge. He says, “the outbreak seems though we as a country were at war; like soldiers trained in combat tactics, but when an enemy invades, then we decide whether to fight as soldiers or retreat in cowardice.” He says to me there were dilemmas that health workers faced responding to Ebola. Family members were very clear to their members who were health workers, as Tangay says, that “we should quit our jobs and retreat to our homes to safety until the outbreak had passed.” Tangay says, landlords evicted their health worker tenants, because they considered them risks to others. But to Tangay, not responding would have been a betrayal to himself, his career and to his country.

Through our conversation, I get a sense of what it looked like responding to an infectious disease outbreak, Ebola, in remote rural areas where there are no road networks, and where the means of transportation from one location to another is on foot and sometimes, hand propelled canoes. He tells me that it was in rural Gbarpolu, Bokomu District close to Bong County, where the Gbarpolu index case was spotted and for the weeks that followed, health workers including himself were dispatched to respond. Due to the low human resource capacity within the Gbarpolu Health Team and at the time low incidence and sporadic nature of the outbreak, suspects were referred to nearby counties, Bomi for those who were closest in the south of the county, and Bong County for cases that were detected in the eastern part of Gbarpolu County.

But transporting sick persons from one location within the county to a pickup point where they were then ferry to nearby Bong or Bomi Counties where the capacity was much stronger was the main challenge. Tangay tells me, sick persons were supported to walk by themselves and usually escorted by a health worker who was fully attired with a Personal Protective Equipment and a chlorine spray can.

Tangay says “as the patient took steps ahead, the health worker sprayed the path that the patient passed through disinfecting the areas. If the patient was becoming weaker as we walked hours, I would help them with an intravenous to restore their strength until we got to the crossing location where we would meet a canoe and an ambulance. The canoe would get the patient across to Bong County, for patients in eastern Gbarpolu and then the Ambulance would take the patient to the ETU in Bong County. Walking took many hours.” The same was the strategy, he tells me, for suspected cases in the south of Gbarpolu who were transferred to Bomi County.

Tangay says many suspected persons died on the way to treatment because of the lack of road connectivity in Gbarpolu, a situation he says possibly mirrors the experiences in many rural areas of Liberia where ambulances and medical teams could not get access due to impassable roads. But help came for Gbarpolu, he tells me, when the United States deployed about 35 Marines to the County, who constructed the Ebola Treatment Unit. That ETU saw about 2 cases when the outbreak ended in the county[1].

Responding to covid-19, Tangay says is much easier and less stressful compared to Ebola response. He described Ebola as deleterious, which carried much uncertainty and terror compared with covid-19 response. Tangay says, the use of reinforced personal protective equipment[2], the widespread lack of knowledge about Ebola among health workers, at the time of the Ebola outbreak made it a terror.

But he says health workers now have even more knowledge about infection prevention and control than they did when Ebola struck. This increased knowledge he attributes to Liberia’s general experience with Ebola. Tangay says, many international partners, including the German Development Cooperation (GIZ), were already present in Liberia preparing health workers to respond to covid 19 before the first case was confirmed. Ebola, he says, presented much confusion and with it, fatality of many health workers.

Tangay tells me, his duty station was the only isolation unit in the country, an 11-bed unit located at the Redemption Hospital in Monrovia, when covid broke out. The unit is tasked with managing infectious diseases. He was thus a natural first responder during the current covid-19 crisis. A role he says he enjoys playing. Even though, he says, no one enjoys putting their lives and families at risk, but emergency response has been his lot since becoming a practitioner and it is the passion that drives his work.

[1] Health teams in Bong and Bomi Counties, with much better accessibility to Monrovia where the Ministry of Health headquarters is located aided Gbarpolu’s response to the Ebola outbreak. Gbarpolu is the last created counties among Liberia’s 15counties.

[2] Reinforced PPEs made it difficult to breathe, as Tangay told me, and health workers had limited opportunities to care for patients while in reinforced PPEs