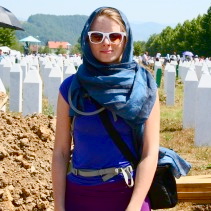 
FILLING IN THE CONTEXT OF CONFLICT

I know that many friends and family following my blog posts about contemporary Bosnia have, for not fault of their own, little or no context as to what happened in Bosnia in the 1990’s. Growing up going to the best public schools, challenging and progressive high school and high ranking liberal arts college, I knew little about the Balkans before I set foot here 2 years ago. The more I learn, the more I realize how desperately important it is for us all to ask questions about the past, to learn from one another. We cannot sit by and wait for war and despair to come into our own lives. We owe it to ourselves to learn about what happened in Bosnia, what happens in places where power shifts, where peace is shattered and where war tears through modern societies. For it is when we ignore these truths and these stories that we are forced to relive them. Below is as concise of a review as I could make in a short space. Please, if you have any questions on details, or want elaboration, please ASK! Together we can better understand Bosnia and through that better understand ourselves. We are not so different.

Bosnia is a borderland between worlds, east and west, European and Asian, Islamic and Christian. Bosnia is the geographic meeting ground of the great religions and powers of European history; the empires of Rome, Charlemagne, the Ottomans and the Austro-Hungarians, a meeting place of Western Christianity, Eastern Christianity, Judaism and Islam . This colorful mixture of cultures and histories has all taken place in a country roughly the size of West Virginia. This diversity has been both its blessing and its curse.

After World War I, with the collapse of the Austro Hungarian Empire, a new world power emerged in its place, the Kingdom of Serbs, Croats and Slovenes, later renamed Yugoslavia. After World War II, the monarchy became a communist republic under Prime Minister Joseph Bornz Tito, and became what we now know as the Federal People’s Republic of Yugoslavia. Modeled after the Soviet Union, Yugoslavia (meaning land of south slavs) established six socialist republics all collectively governed under the umbrella Yugoslav government. The constituent six Socialist Republics that made up the country were: Bosnia and Herzegovina, Croatia, Macedonia, Montenegro, Slovenia, and Serbia. The capital of Yugoslavia was in Belgrade, Serbia. Each republic had its own sub government, but the Yugoslav identity reigned supreme. Based on the values of Brotherhood and Unity, Tito kept a tight lid on ethnic tensions by strictly minimizing ethnic and religious identity while bolstering the Yugoslav identity. Rather than address and embrace differences, Tito sought to replace all other identities with Yugoslav. Yugoslaiva walked the thin international line between the USSR and the United States and remained a neutral nation in a tense international period. Yugoslavia had the third largest army in the world and hosted the 1984 Olympics in Sarajevo and was, by many accounts, a modern nation. Many today look back on Yugoslavia with fond memories, or “Yugonostalgia”. While it was a strict communist nation, compared to what came after it was paradise. However, after Tito’s death in 1980, the lid on ethnic tensions he had so carefully kept shut began to pry open.

When Tito died, his vision of Yugoslavia died with him. Almost instantly the muffled voices of nationalism became louder and louder. Serb president Slobodan Milosovic led the largest nationalist campaign, leading many non-Serbs looking for an exit. Following the fall of communism in the rest of Eastern Europe, each of the republics held multi-party elections in 1990 after  it became clear that Serbian domination attempts and increasingly different levels of democratic standards were becoming increasingly incompatible. Built into the constitution of Yugoslavia, each individual republic had the power to succeed without conflict out of Yugoslavia. In June of 1991, the republic of Slovenia seceded sparking a relatively painless ten day war. Croatia, which declared independence at the same time, faced a tougher exit. Because Croatia has a sizeable Serb minority and a picturesque and lucrative coastline, the Yugoslav National Army (JNA) refused to let it go. A seven month war left some 10,000 dead and 700,000 displaced from their homes. It also introduced the world to the images of Serb lead artillery pounding civilians in towns like Dubrovnik and Vukovar. By late 1991 it was clear that Bosnia, the most multi-ethnic of the Yugoslav republics (43 percent Muslim, 35 percent Orthodox Serb, and 18 percent Roman Catholic Croat), was once again in a contentious territory. If Bosnia remained a republic within the increasingly Serbo-Centric Yugoslavia, Bosnian Serbs would receive preferential political power while the Bosnian Croat and Bosnian Muslims would be marginalized and likely abused under Milosevic’s oppressive rule. However, independence would also place Bosnian Muslims in an especially vulnerable position, not having a parent protector like the Croats with Croatia the Serbs with Yugoslavia. The Bosnian Muslims had to rely on the international community.

The seven members of the Bosnian presidency, two Bosnian, two Serbs, two Croats, and one Yugoslav, turned to Europe and the United States for guidance on how to gain independence and avoid bloodshed. Western diplomats instructed Bosnians leadership to offer human rights protections to minorities and state a free and fair independence referendum. In March 1992, they held a referendum on independence in which 99.4 of voters chose to secede from Yugoslavia. However, the two Serb members of the presidency, who were hardliners, determined the vote to be illegal and used it as a means to protest independence. Backed by Milosevic in Belgrade, both Serb nationalists in the presidency resigned and declared their own separate Bosnian Serb state within the borders of old Bosnia. The Serb-Dominated Yugoslav national army teamed up with local Bosnian Serb forces contributing an estimated 80,000 uniformed Serb troops and handed over their entire arsenal to the Bosnian Serb Forces. What was in many ways a death sentence on Bosnian-Muslims, on 25 September 1991, the United Nations Security Council passed Resolution 713 imposing an arms embargo on all of the former-Yugoslavia. While the Bosnian Serbs inherited the lion’s share of the Yugoslav People Army’s arsenal and the Croatian Army could smuggle weapons through its coast, the Bosnian Muslims were left without. That froze in place a gross imbalance of Muslim and Serb military capacity. When the Serbs began a vicious offensive aimed a creating an ethnically homogeneous state, the Muslims were largely defenseless. Merely days after Bosnia’s declaration of Independence, Serb forces besieged the capital of Sarajevo from the surrounding hilltops and held it as such for the next 4 years. Serb, Croat and Bosnian forces along with countless militia groups fought for territorial control. Serb’s quest for a greater Serbia left little room for compromise. No one was left without blame as neighbors turned against neighbors and communities dissolved into chaos for 4 long and bloody years.

Map of besieged Sarajevo. The Olympic city was completely surrounded by Bosnian Serb forces which rained down thousands of shells a day and constantly bombarded civilians for 4 years.

Ethnic cleansing was not only a side effect of the war, but rather its direct purpose. In Serb’s quest to create a Greater Serbia, all non Serbs needed to be cleansed from the landscape. This occurred through intimidation, violence and genocide. Serb Forces lead a scorched earth campaign across eastern Bosnia, ransacking Bosnian Muslim homes and massacring populations as they went. As a result, in 1992 the UN established a UN Safezone in the town of Srebrenica in eastern Bosnia. Tens of thousands of refugees fled into the safezone of Srebrnica, to take cover and safety. However on July 11th, 1995 the safezone fell into the hands of the Serb forces lead by General Ratko Mladic. With little supplies and no reinforcements, the UN Dutch Batallion sat and watched as 40,000 refugees were turned over to enemy hands. Women and children were bussed away, while men were lead to their deaths. 8,375 men were systematically murdered and buried in mass graves in the surrounding hills. Srebrenica was claimed for greater Serbia.

Srebrenica was the largest single act of genocide in Europe since WWII, and the international community could no longer sit idley by and let the war continue. By 1995, the demand for peace was undeniable, and the international community upped its role in the war. A new injection of international military force was able to curtail the mounting violence and create a space for intervention. The timely combination of weakened fronts, international pressure and generalized war fatigue set the stage for a negotiation of peace. The internationally brokered Dayton Peace Agreement was negotiated by representatives of the ethnic Parties (Croat, Bosniac, and Serb) as well as representatives from the neighboring Republic of Croatia and the Federal Republic of Yugoslavia, at US-led talks in Dayton, Ohio, in November 1995. After swift negotiations the, “General Framework Agreement for Peace” officially ended the war on December 14, 1995. The Dayton Peace Accords were engineered to serve both as a cease-fire and a state-building doctrine. The Accords were intended to create short-term peace as well as long-term stability, through the establishment of new political lines and democratic institutions. Bosnia was partitioned into the Republika Srpska (Serb Reupblic) and the Federation( Croat and Bosnian entity). These two entities function as two separate states only held together by a thin veil of a state government. Now 17 years after its signing, Dayton has served to further divide Bosnia along ethnic lines, and has locked Bosnia in a state of diplomatic paralysis. With its one state, two entities, three main ethnicities, four million citizens, and five layers of governance, led by 14 prime ministers and governments, the conflict has left the streets and now is fought throughout the system.

Once again, the multi-ethnic identity of Bosnia is its definition.  The war lasted just short of 4 years. In total over 2 million people of the total 4 million in the country were displaced from their homes. Between 100,000-200,000 people were killed and virtually no one was left unscathed from this bloody conflict. For now, the surface is calm, but only time will tell if it can remain that way.