After many delays, we finally finished the majority of our filming! This film has been a major project for us for over two months – from interviewing potential volunteers to the actually filming today, it’s been quite a journey for all of us here in Vancouver. We were lucky enough to receive help from a professional camera man and from the unedited film we saw today, we are quite impressed by the quality.

During the four hours of filming, we were constantly distracted by noise from a duct cleaning service to the sudden appearance of a “got-junk” truck hoisting some woman’s trash in and out of the premises.

I realized I sound absolutely horrific on camera. My voice sounds…whiny? It does not pair well with advocating for minority rights.

The camera liked Fakhteh so much that it made her look a decade younger.

We were able to finish filming one video for each of the two guys (Vahid and Yashar) that work for ADAPP and one video for Fakhteh. That’s 3 videos in one day!

Here are a couple of pictures from filming Fakhteh. 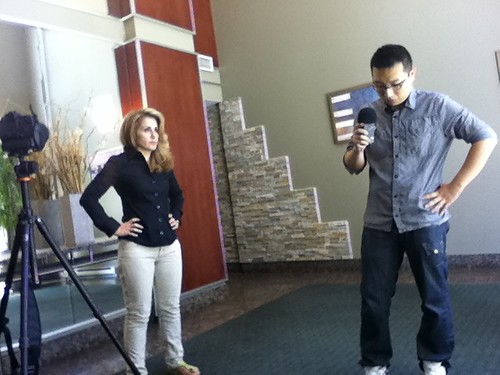 Stay tuned for the finished product!