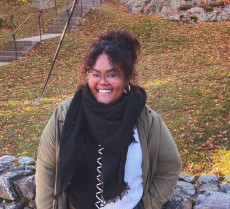 Miriam Correia is working on her Masters in Public Administration at Albertus Magnus College in New Haven, Connecticut. Her background has been in nonprofit administration and she is hoping that her future will be in public policy and international relations.  She is excited to be working with the Advocacy Project because of all the good it does in marginalized communities throughout the world.


Finding My Place in the World

I think that many of us, as Summer Fellows of the Advocacy Project, and as 1st generation Americans or immigrants, can relate to not always feeling like they know where they belong or which culture to adhere to.  I am a first generation Cape Verdean-American. My family is from Cabo Verde Islands, an archipelago off the coast of Africa.  Many Americans have never heard of Cabo Verde and think I am referring to Cambodia or an island in the Caribbean.

Cabo Verde was colonized by the Portuguese and gained their independence on July 5, 1975.  My dad saw my mom for the first time at the parade celebrating independence.  They would find each other again years later and this time they would get married and my dad would bring my mom to the United States and start our family.  I had a magical childhood.  I took my first plane ride before I turned 1 and I got to travel to Cabo Verde or Portugal almost every summer to see my extended family.

As a child, I never thought of my differences from the other kids but as I grew, I started noticing the differences in things as small as throwing my gum out the window.  In the US, littering is more common than anything else while in Portugal and most other European nations, they have different trash cans and recycling bins in very accessible areas because it is every citizen’s job to keep the environment clean and beautiful.

Education is valued greatly in Cabo Verde and the diaspora is so wide-spread because people leave to learn and to explore careers in other places.  My studies were always very important to my parents-I didn’t know that college was an option until I was in high school (never an option for me, but for others).

In Cabo Verde, there is also a huge part of the culture that tells us to sweep men’s wrongdoing under the rug.  I am not someone who can do that and I have gotten in trouble with my family a few times now for calling people out when they do something wrong.  Sometimes I feel like the black sheep or like I was put into the wrong family.  Other times, especially after seeing and reading some of the stories of the people and communities we are advocating for, I know that I was put in this family to stop people from getting away with unspeakable atrocities and protect the women in my family when I can.

I am glad to be part of the Advocacy Project so that I can advocate for and protect others on a larger scale, specifically African women.

To be a global citizen means to take the good parts of all the places we have been and learn from the not-so-good parts and try to leave the world a little better than we found it. I am hoping to do that with the lessons I have learned from my family and through working with international organizations to become a better person and advocate.  I want to change the world and I know that it starts at home with my family.

Although I vacillate between being an American, a Cape Verdean, and a child of the world, I know that I am in the right place right now and I am doing the best I can.