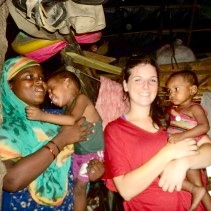 Clara Kollm (Chintan Environmental Action and Research Group - Chintan): During her undergraduate study, Clara worked abroad in Thailand and travelled widely in Southeast Asia. At the time of her fellowship, she was pursuing a B.S. in Environmental Science and Policy from the University of Maryland, College Park. While at UMD, Clara also completed a minor in International Development and Conflict Management and a certificate in Public Leadership. She also interned in Washington D.C. with a non-profit environmental law firm, Earthjustice. After her fellowship Clara wrote: "Being in India and learning about an international NGO is invaluable to me and my education. This experience ...has given me a greater appreciation for the human condition. This was my first experience with that level of poverty, and I predict that this experience will continue to influence my life choices.”

Last week I had the pleasure of attending a ribbon cutting for one of Chintan’s schools. The school is the most recent addition to Chintan’s “No Child in Trash” program, and is made from entirely re-usable materials. The school itself is beautiful and is a beacon of hope for the community, not to mention one of the only buildings with electric fans on the premises.

When I talked to the 3 teachers for some 60 students, some of the challenges that the No Child in Trash (NCIT) initiative confronts daily became evident. For instance, the children are all extremely different – they are different ages, they speak different languages, and they have had different levels of exposure to education – which complicates the single classroom setup. Many of the waste-pickers are immigrants and only speak Bengali or another regional language, so the students find themselves learning Hindi and English at the Chintan schools. Further, while this school itself is wonderful, the facilities are still extremely basic. Specifically, there are no floors. The children and teachers alike sit on thin carpets that barely contain the dirt beneath them. Remember how hard it was to pay attention to the teacher in school? Now try image paying attention with a rock sticking into your behind.

At the event, I had way too much fun pretending to be a professional photographer; here are some of the most powerful images from the afternoon; to view the abridged set of photos, click through to my Flickr page here!

You would never realize it from the number of photos I ended with, but I was very hesitant to take pictures. It was my first time with the community and I didn’t want to intrude by taking photos of people’s homes and children. I was also extremely uncomfortable about potentially promoting my own version of “slum tourism” after reading an insightful and articulate blog by Kristen Maryn, an AP Fellow in Nairobi, Kenya. However, after a few hours and some rough translation, the camera came out and stayed. Parents actually asked me to take pictures with their children, and the kids were giddy when they saw their picture on the digital screen. Many of the residents actually took out their cell phones and started taking pictures of me! If it goes both ways, it can’t be that bad? Right?

What do you think, would you ever be a “slum tourist” and pay to see poverty? Would it matter if you became a “better” person after the experience? I highly recommend Kristen’s blog, and the articles that she linked, for some interesting perspectives. Here are the links again for your convenience: Kristen’s blog, “Slumdog Tousism” – NYT, “Rich, Famous, and Living in a Slum” -Wall Street Journal, and “Poverty as Entertainment” – Daily Nation.