Fons of the North West Province

Nkumu Fed Fed’s HIV/AIDS awareness campaign attempted to combat the disease by identifying harmful cultural practices and training women to take the lead in changing those norms. Tradition, however, is engrained in society and is not challenged easily. Understanding that alone, women would face considerable obstacles, NFF reached out to the traditional chiefs of the North West Region. Called Fons, these rulers a more than just spiritual guides for their people, governing their fondoms as the primary and final voice on all matters—political, social and cultural. They are heavily respected in their societies and because no decisions are made without passing through them, as the sub-chief of Bali explained to us, cultural evolution will not happen without their cooperation. During its HIV/AIDS advocacy project, NFF sensitized a number of regional Fons to the dangerous effects certain cultural behaviors have on their communities. Over our two weeks in Bamenda, Johanna and I have had the opportunity to meet two local leaders who participated in the NFF training and get their thoughts on the subject. 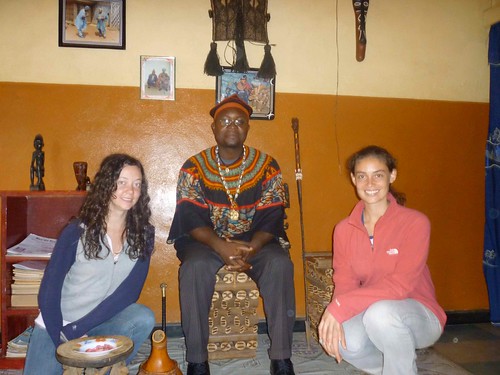 Above: Johanna and me with the sub-chief or sub-fon of Bali.

Our first interview was with the sub-chief of Bali, a traditional leader and guide of several clans in the region who answers directly to the Fon of Bali. Before arriving at the palace, our project director Emmanuel Ngang briefed Johanna and me on appropriate behavior when meeting the chief. We were not allowed to touch him, could not cross our legs in his presence, and could not enter his home empty handed (we had to bring a gift or offering of some kind). Furthermore, we had to follow proper protocol during our meeting. For example, when he offered specially made fresh palm wine, the correct way to accept the drink was to approach him, bow and extend out your glass using your right hand while bowing. Though I am not a member of his clan, nor can I personally relate to the system of fondoms, I felt his authority nonetheless.

The chief explained that “in these areas…where traditions are still very much in tact, you cannot have access to the people without passing though the traditional rulers,” and that “every activity needs to pass directly through [him] to get to the people,” meaning his approval and involvement in the campaign was pivotal to its success. He was a surprisingly forward thinking, stating that culture is not static and that while “our fathers, their fathers and their fathers’ fathers” may have practiced a particular tradition, it may no longer work in the present day context. Cultural jamborees (large dance festivals that tend to include drinking and sexual promiscuity) for example, have become extremely dangerous in an environment with a high HIV/AIDS prevalence rate. Presented with hard facts concerning the health and security of his people, this ruler understood that continuing certain cultural behaviors would unsustainable and damaging, to say the least. 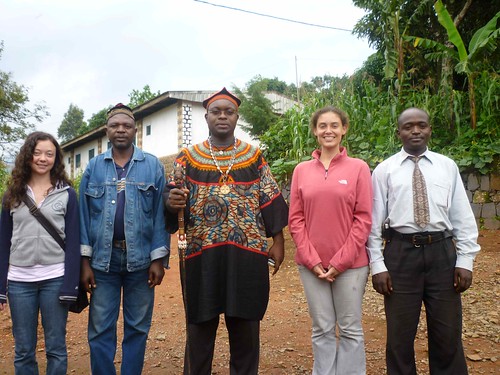 Above: Us with the Sub-Chief of Bali (center) with a nobleman (far right) and his traditional healer (second from left)

The second traditional chief we interviewed thus far was Emmanuel Muam Bong, barrister at law and Fon of Bu. Though he was older than the sub-chief of Bali and more subdued, Mr. Bong was equally outspoken concerning the cultural practices that have the potential to seriously harm his people. One such practice NFF highlighted as a main facilitator of the spread of HIV/AIDS was polygamy, yet all fons continue to be polygamists… save one: Emmanuel Bong of Bu. Despite significant outside pressure for him to take a second wife (or more), the Fon refuses to endorse what he believes to be an unnecessarily risky cultural tradition.

The fons trained during NFF’s advocacy campaign are truly doing something groundbreaking and awe inspiring. They are challenging cultural norms that have characterized their societies for centuries and are doing so for the good of their people. What is even more incredible is precedent they risk setting. They acknowledge that culture is dynamic, constantly changing and adapting to social evolution, but once progress starts, where does it stop? Combating tradition is remarkable, particularly coming from these rulers whose status and livelihood depend on culture and tradition. Once you start challenging the status quo, it has the potential to open the floodgates for social change, which can be threatening to their position. The fact that they are still willing to stand up against the disease, risking their own self-interest, is truly remarkable.