From Bus to Hotel, Journalism Training in Nepal 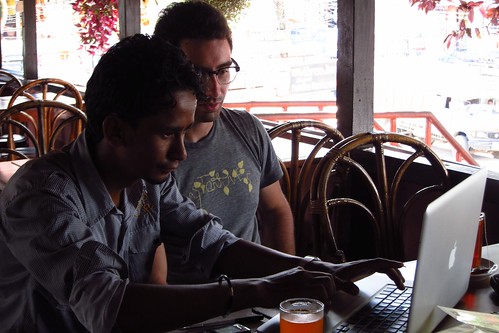 The grassroots journalism project is complete, and ten Jagaran Media Center affiliated Dalit journalists are now active on blogs and other social media platforms. Prakash Mohara and I crisscrossed the country, from Sunsari district in the east to Kailali in the west, and Baglung in the north, training and meeting journalists and local human rights-focused NGOs. The travels were often long and uncomfortable and difficult and plans fell through or were side-tracked, and creative problem solving was always on order.

The grassroots project’s premise is to extract caste-discrimination stories from the community, publish them on online platforms (Nepali media outlets do a poor job in publishing cast-discrimination cases), use these stories in advocacy and lobbying efforts, and try to provide local justice and accountability through newly affiliated local NGOs. On a macro level, it’s an attempt at making the JMC a media hub for Dalit news and advocacy in Nepal. While at the micro level, it’s intent is to provide justice to those whom justice has forgotten.

The first training occurred in the eastern district of Saptari with Rajkumar Paswan, trained by JMC a few years ago who now reports on local issues for National News Agency, Katwal Radio Magazine, edits and publishes his own magazine, New Kanchan Weekly, and is a founder and president of a local NGO, Rastriya Dalit Shamrakshyan Manch Nepal.

At first, the training was slow as Rajkumar’s English is poor and WordPress’ interface is in English. Another difficulty arose as WordPress (like most programs) doesn’t allow one to type blogs in Devnagari script. The blogs must first be written in Nepali on Microsoft Word, cut and pasted onto an online Unicode converter, and then re-copied onto WordPress as Unicode script. We practiced these steps more than a few times, and training then moved on to the uses of Facebook in advocacy and journalism, and sharing his blogs online with his friends.

I would either do the training in crowded Internet cafes, with curious onlookers swarming around a slow desktop computer, in free wifi areas at restaurants and tea shops, plugged into slow landlines at offices, or using my mobile Internet card at hotels (when a signal was available). Prakash would be by my side translating when Internet language didn’t translate well (or do the training himself near the end). The juxtaposition of computer and technology training and the surrounding area of rickshaw drivers and samosa stands and decrepit overcrowded Tata buses was pronounced, and seemed to disturb the natural order of things.

From Rajkumar in the east, we pushed further eastward through Biratnagar and Dharan and spent time in Dalit villages. In one, the Tharu Chaudharys ransacked, pillaged, and burned the Dalit village one early evening, accusing them of stealing business and jobs, forcing the villagers to flee with few possessions, and only returning some time later, on edge, and forced to rebuild.

In the north, we met and trained Prem Nepali and Mahesh Khati, two veteran JMC affiliated journalists. In the west, the same went for five other journalists. In each place we stopped, we met an interested NGO working on human rights and Dalit issues, and convinced them of the project and to hop on board. All the meetings were positive, and all were quite enthusiastic of helping out in their communities and changing backwards attitudes towards the Dalits.

We traveled six to eight hours on a bus between each stop and met the journalists and NGOs afterwards. We would bargain for hotel prices, try and find the best dal bhat and roti in town, and be in bed early, readying ourselves for the next bus ride and training session.

A few weeks have passed since the project was complete, and I hope it continues and prospers into 2012 and beyond. Some of the journalists post stories regularly, while others need more cajoling in their online activities. The JMC is enthusiastic about the project, and knows that it will be their focal point as a media organization in the second decade of the 21st century. Nepali media’s web presence is still at its infancy, but to stay ahead of the curve, the JMC must take advantage of their Dalit media niche and own that online space.