From the field: women’s literacy training in Fushe Kosova

(I know I said the last post was supposed to be more about the situation of Roma, Ashkali and Egyptian women in Kosovo, but I got sidetracked by Flurije’s story! So now I’m moving along…)

This week I finally started my field visits (not counting a quick meeting in Gracanica, a town about 20 minutes outside of Pristina, to speak with Voice of Roma last Friday). I was very happy to be out exploring. Although I’m happy to spend my days picking up Albanian slang from the staff at the Kosovo Gender Studies Center while I’m editing grant proposals and having fabulous 1-euro byrek me spinaq lunches from the shop down the street, I didn’t come here to spend 40 hours a week in an office!

The goal of these visits has been to find partners for the project I’m doing with RROGRAEK – working with women from these communities to create an advocacy quilt that expresses their hopes for Roma, Ashkali and Egyptian women’s empowerment – and for me, it’s been a chance to start getting more than a textbook idea of what being a woman in these communities looks like in different parts of the country.

My first visit, to observe a literacy program for Roma, Ashkali and Egyptian women in the town of Fushe Kosova, helped to put me in touch with one of the most basic and most poignant struggles most women from these communities face – getting an education.

As educated, literate NGO workers, RROGRAEK’s staff, Shpresa (who is Roma) and Diana (who is Egyptian) don’t represent the average women from their communities. According to UNICEF, only 13% of Kosovar Roma, Ashkali and Egyptians (boys and girls) between the ages of 16 and 19 are in school; only about 1% attends university. Kosovar Roma, Ashkali and Egyptian women are among the least literate in the region. 69% in the 25-34 age group are literate, and the numbers are actually worse for the younger generation – only 56% of women in the 15-24 age group are literate. (I would think because of the upheaval during the war – I don’t know if this will be part of a longer-lasting trend). With a profile like this, it’s easy to see how Roma, Ashkali and Egyptian women remain trapped by poverty and powerlessness. I was excited to have the chance to visit a community-run program that’s trying to change these numbers. 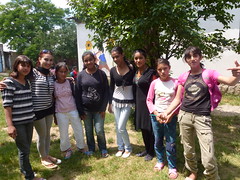 Ferdane (second from left) with her Balkan Sunflowers literacy group

The program is run out of the Balkan Sunflowers learning center in Fushe Kosova, just a few kilometers outside Pristina, where 370 children, mainly from Roma and Ashkali communities, get free pre-kindergarten classes, homework help, and summer camp. Ferdane, the 25-year-old Ashkali woman who runs the program, took me to the compound’s backyard and introduced me to the day’s group. Eight girls between 12 and 16, who were sitting around a plastic play table under the cherry trees, smiled at me shyly and then went back to their workbook exercises. Once they finished their work, they were excited to show me some of the complicated beadwork they’d also done at the center (Balkan Sunflowers gives them materials to make handicrafts as a motivation to stick with the literacy course when it gets difficult).

I learned that some had had a bit of primary school, others none at all. Ferdane proudly told me how at first she had had to actually hold the hand of one girl so she could form letters, and that now that girl was filling out crossword puzzles and diligently working her way through the course that would bring her up to a fifth-grade reading level.

Ferdane said that in the winter the class was full of women of all ages; in the summer, they have too much work to do at home, families come visit from abroad, and schoolwork lapses. Her experience, she says, confirms the reasons often reported for women’s lack of education: “The big problem for many is family… Always women here need to care for the house, for younger sisters, brothers… family is always the problem…. They only motivate the boys to go to school.”

In these communities, cultural norms and all the immediate necessities of daily life can drown out messages from the government and NGOs that girls have a right to go to school and become educated women. Ferdane says that, at least, the women she’s been working with over the past two years have learned that education is important, and that they look to college-educated Ferdane not as an outsider – as they did when Ferdane first started teaching – but as a role model.