Gender Balance is not only about empowering women

It is interesting to hear how differently the two groups in Lelmolok Internally Displaced Persons Camp addressed the challenges that they are facing now:

(6)Exposure of women to rapes and children to molestation

(2)   Land Ownership is still not guaranteed

(3)   Local employment policy is against hiring Kikuyus—So no job more than farming, no extra income

Why there is such a big difference between women’s thoughts and men’s even those women and men are family members and experienced the same trauma due to the 2007 post-election violence?

“(It is because) the day-to-day life of women and men are so different.” A community development assistant said during the community facilitator training held by Ms. Abby Onencan, a global advisor of Vital Voices in Nanyuki, Kenya. 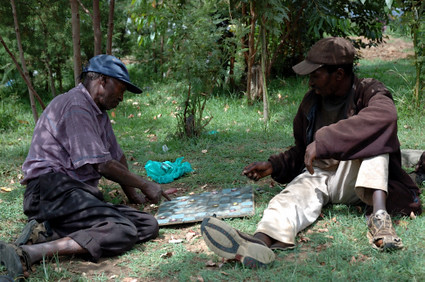 On the contrarary with busy women, men in Eldoret Lelmolok IDP Camp still have leisure time to play chess.

Although the Kikuyu communities in Nanyuki are different from the ones in Eldoret, they share the commons of social background on the issue of gender balance.

During that workshop, under Ms. Abby Onencan’s entitlement, I, as a fellow of Vital Voices and The Advocacy Project, conducted a session of Gender Awareness and Gender Balance in Community Development to the local governors who take in charge of empowering the community in their wards.  The participants were divided into three groups to profile 24-hour life of a typical local Kikuyu woman/man/youth from their communities.

The man’s character was described by the first group of CDAs as a 35-year-old unemployed farmer and his daily life was profiled as below:

On 5:00 a.m., he wakes up the women in his family and goes back to sleep. On 7:00a.m., he gets up to milk the cows and takes the milk to nearest dairy. From 8 to 9, he takes the breakfast prepared by his wife and gives order to his wife and children. From 9 to 10, he collects folders for the cows and goes to his farm to till the land until 1:00 p.m. He then takes the prepared lunch. After watering animals and repairing fence, he walks to the local market for news. During the whole four hours from 4p.m. to 8 p.m., he is drinking spray and talking with other men about politics. Around 8p.m., he goes back home, takes prepared supper, enjoys entertainment such as watching TV and A.O.B, and then sleeps.

Compared with this typical local Kikuyu man’s daily schedule, activities that a normal local Kikuyu woman did in a normal day, described by the second group of participants, exploded over the table on the flipchart.

5:00 a.m  She gets up and prey. Then she lights the fire, prepares the breakfast for her husband and children and takes the older children to schools.

6:00-8:00 p.m. She feeds the family, cleans up the home, waters the animals, watches the children to do homework, etc.

I was having a headache by just listening to and writing down all these activities done by this represented woman character. According to one definition of working–“activity involving mental and physical effort done to achieve a purpose or result”–the typical local Kikuyu women work 17 hours a day, compared with 7 hours a day for local kikuyu men.

Even more sadly, women in Kenyan rural area work so much only for increasing the family properties that are not under their control. While the men in the families who work much less hold main accesses, benefits and controls on most family assets such as houses, land, cows, goats, furniture, electricity, etc, women only have their total control on the chickens. The only benefit that women can obtain from these assets is domestic use. (For example, they can drink the milk milked from the cows that belong to their families.)

Women’s loads, in the rural of Kenya, yet end up with just feeding their husbands. The youth, who graduated from schools without being employed, also rely on their mothers– they only work for 4 hours per day with little income and waste the rest of the day by doing nothing. (Also shown by the profile mentioned above) No wonder the Kalenjin youth in Eldoret were so easily “incited” by a “salary” of 300 shilling/day, paid by local politician, to constantly cause violence against Kikuyus in this region post the election in 2007.

At the end of this post, I guess it is not hard to answer several questions about the gender issue in rural Kenya.

Who work most? Women. Who benefit least from their working? Women. Who suffer most during and post the social traumas such as the 2007 election violence? Women.

How to solve this gender imbalance?

The answer for this question is probably not as easy as “empowering women”, as the gender issue is not about women but the relations between women and men. 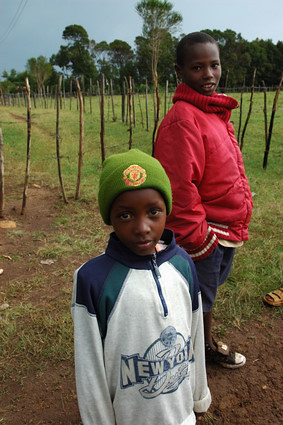 To better balance the relations between genders in Kenya, the hope may be left for the next generation under RFH mentorship program.

*etc means there were some activities were not written down due to limited space on the flip chart. 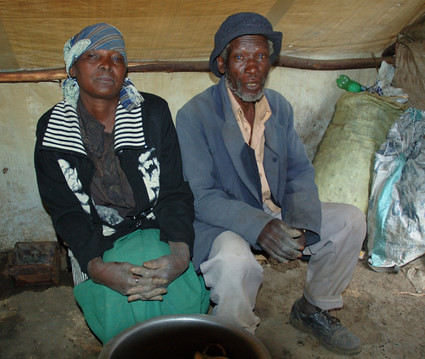 Women in Eldoret Lelmolok IDP Camp were trying to do everything to make their family tent as a home.

“It is because women and men are different.” It is even not an answer.