Kenza Elazkem was born and raised in Marrakech, Morocco. She later moved to the United States to finish high school and pursue a degree in Political Science at the University of Texas in San Antonio. During her undergraduate studies, she participated in an exchange program at Hanyang University in Seoul, South Korea. Kenza's interest for development started then. After completing her degree, Kenza joined the Carter Center for an internship in the field of democracy and election observation. She is currently pursuing a dual master's degree in International and Sustainable development between Hankuk University for Foreign Studies in South Korea, and the United Nations University for Peace in Costa Rica. Kenza taught English at a rural primary school in Costa Rica and also joined a women's Capoeira collective. She is eager to learn more about the world and enjoys cooking, traveling and sharing. After the fellowship, she wrote: "The best aspect of the fellowship was to see the process of carpet making and sharing meals with the women's families. Through the fellowship, I have learned the NGO jargon in Arabic. I am also more aware of my surroundings and pay more attention to detail now." Contact: kelazkem@advocacynet.org

As I come into Fatima’s house, Anna, a Fullbright researcher, is already sitting around the table while Fatima is bringing the last dishes to the table. I can’t help but notice that there are two tables being set up in the same room.

Fatima looks at me and says: The Fqih from the mosque next door comes to have Ftour with us everyday. He has just been appointed to this mosque and has no family here so my husband invites him for Ftour everyday. That’s why I set up two tables, I hope you don’t mind.

A little after the call to prayer, Mr. Laaroussi, Fatima’s husband, and the Fqih come in and sit in the table where Mehdi, the son, has already started eating. Mr. Laaroussi loves to have guests around and is very funny. He engages Anna and I in all the conversations. We talk about everything and nothing, from football to space discovery. All of a sudden, Mr. Laaroussi turns to his guest, who is rather shy, and asks: Who is that new guy at the mosque? He’s not from Ain Leuh.

The Fqih: Who are you talking about?

Mr. Laaroussi: The tall skinny one, who always wears black.

Mr. Laaroussi: Hmmm I don’t know about that, he scares me a little.

Mr. Laaroussi: I think he does a little bit too much of everything.

The Fqih: What do you mean?

Mr. Laaroussi: You know, when we’re doing our ablutions, he takes out something from his pocket to wash his mouth. I think it’s too much, you’re only supposed to rinse it.

The Fqih: Naaah, he’s a nice kid, you have nothing to fear.

Mr. Laaroussi: I don’t like quiet people, you never know what’s on their mind. I am telling you he scares me. Have you noticed that every time he’s in the first row, I’m in the back and vice versa. You never know, he might be a follower of ISIL or something and explode in the mosque some day.

We all burst out laughing even if a bit nervously.

Ten o’clock on a Tuesday morning. I’m getting ready to get into my car and go down to the cooperative. The hostel where I’m staying is a short five-minute drive from the main street of Ain Leuh. A group of young girls are coming down the hill and ask me for a ride. They get into the car and I start driving.

Me: Were you girls up at the pool?

I can’t really tell who is talking as I am coming down a curvy road and have to keep looking straight ahead of me.

One of the girls reply: yes, we went up to swim this morning.

Me: Isn’t it too early to come down?

Another girl: well yes but we had to go a 7 am. In fact we haven’t slept yet. After Shor, we cleaned up the houses and came up without even our parents knowing.

Same girl: They don’t like us going to the pool during Ramadan and we make it a point to leave at 10 am before the boys wake up and start coming. You know, they can’t see us with our bathing suits and wet clothes during Ramadan.

Me: What grades are you girls in?

They start answering one by one, the oldest is in her sophomore year of university and the youngest is in third grade. They also tell me that they’re all either neighbors or from the same extended family.

Me: So what do you think of this?

Another girl, the one in 8th grade: You know what they say: “Halaloun 3alayna wa 7aramoun 3alayhoum” (Allowed for us but forbidden for them.) They always make up rules in favor of the men but we still go around them, we want to swim too. You should come with us someday.

Me: I will. As soon as Ramadan is over.

Yes, even though I lived abroad for about 9 years now and can talk extensively about feminist political ecology and women’s access to water, I’m still Moroccan, very aware and careful of unwritten rules. 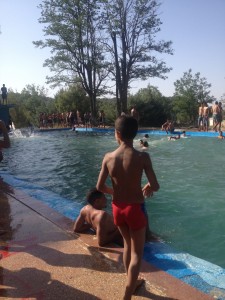 Children having fun at the municipal swimming pool of Ain Leuh.