As part of their Vital Voices supported HIV/AIDS advocacy campaign, Nkumu Fed Fed (NFF) held sensitization workshops on the harmful effects of certain cultural practices, training representatives from 70 other women’s groups. Each representative was then able to take the new knowledge back and share it with other members from her own organization. One woman, Clotilda Andiensa, attended the trainings on behalf of the Bamenda based Global Education & Environment Development Foundation, or GEED. Last week, Johanna and I had the opportunity to sit down with Clotilda and three other members of GEED to discuss their own mission and activities, and how effectively the NFF campaign played out. 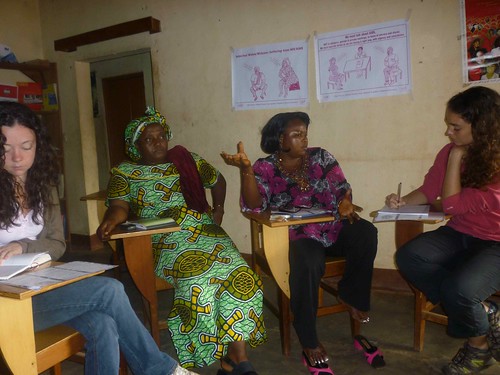 Above: Clotilda Andiensa speaks with Johanna and me at our meeting with GEED. In the background are two HIV/AIDS awareness posters produced by Nkumu Fed Fed. These materials were critical components to NFF’s advocacy campaign.

Established the same year as Nkumu Fed Fed, The Global Education & Environment Development Foundation has been working to change the conditions for women in Cameroon since 1996. Over the past 13 years, GEED initiatives have reached out to women and young girls, providing education on health, leadership skills and conflict management, to name a few. Using a gender sensitive approach, GEED promotes social justice and development by fighting for and defending human rights.

Inviting GEED to participate in the HIV/AIDS awareness campaign was a natural partnership for NFF, given their common interests (see previous post I fine for sabi for NFF’s mission and vision). During our meeting, Clotilda told us what she took away from Nkumu Fed Fed’s training and how she felt NFF could improve for the future.

The primary objective of NFF’s workshop was to sensitize participants on how specific cultural behaviors facilitate the spread of HIV/AIDS and, as the GEED women remarked, NFF hit its mark. They learned, for example, that polygamy increased the potential for new partners whose status is unknown to bring the disease into a marriage. Furthermore, the NFF seminar discussed the excessively lax attitude people of the North West (and all of Cameroon for that matter) have towards HIV/AIDS, not getting tested often enough or before getting married. The workshop then explained that cultural traditions cause major problems as well, such as the Njumba Market Days. During these Days, all the young people gather together in the center of town, finding various sexual partners. On the eve of a Market Day, wives go to the houses of their boyfriends while husbands wait at home for their girlfriends to arrive— a traditional, acknowledged and accepted spouse-swap, creating a dangerous environment and allowing HIV to “spread like wildfire in the dry season.”

As far as recommendations for improvements on the trainings, the GEED women had some very interesting insight. First, they mentioned that while training women leaders helped create awareness, the campaign would have had a far greater impact had NFF focused on training youth, in particular young girls. Additionally, NFF did make an effort to include traditional rulers (called fons) in the project, but as GEED pointed out, fons don’t work alone. They are individuals surrounded by a system and environment constructed to protect and enforce cultural traditions. Therefore, getting in touch with fons directly is an important step, but GEED discussed the need to train the enforcers of traditional practices as well (i.e. traditional councils, healers, etc.).

It is important to understand that changes in culture will come gradually, but with NFF’s efforts and GEED’s advice, the campaign is on the right track.