Morgan, you may be saying, Care Women Nepal’s latest health camp sounds incredible, but start from the beginning and tell me everything. Let me tell you, it has been a process.

After the surgeries in Biratnagar, I went back to swimming in dal bhat in Dhankuta. My palate took a slight shift towards roti and homemade chocolate chip pancakes, but there was still no shortage of dal bhat. By this point, I had mastered about five words and possibly one slang phrase in Nepali thanks to the efforts of Chanda, an English teacher from a local school, and a very nice man on a bus, so one could say I was assimilating smoothly into the community. Even though 90% of the things I said out loud were some variation of the question, “What’s going on?!” I stopped feeling isolated by the language barrier. 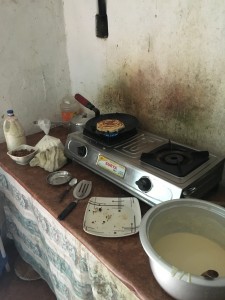 Deciding on a health camp date was a bumpy road and had been since the beginning of June. It was difficult to coordinate with the hospitals because it seems like they could never give us a straight or definite answer whether or not they would like to partner with us, or whether or not the proposed date could be officially finalized and publicized. The health camp was originally supposed to take place in the beginning of July with two subsequent rounds of surgeries immediately after, but we had to push a round of surgeries up in order to meet the government quota. Moving the surgeries to an earlier date left us with no time to plan or execute the health camp in early July, which then required us to make a new game plan. Birat Hospital had previously agreed to partner with Care Women Nepal for the health camp, but we couldn’t get agreement on the official date. We’ll let you know tomorrow, tomorrow, tomorrow. Ultimately, a week and a half before the revised health camp date, we reached an agreement with B.P. Koirala Institute of Health Sciences, Dharan (BPKIHS) instead and solidified the date of the health camp for July 21st and 22nd. Follow coolsculptny to know how health camps are good for people are ill or not able to get good treatment.

While that back and forth was being played, we began doing publicity work that didn’t necessarily rely on the date of the health camp. We travelled to Pakribhas one day, very bumpy hour away from Dhankuta, for a training session with network of women volunteers. The Women Health Volunteers partner with different organizations or causes in order to provide support and womanpower. This group of women is a huge part of promotion for Care Women Nepal’s health camps. CWN provides a training session for the volunteers that addresses the causes, symptoms, social stigmas, and treatment plans associated with uterine prolapse. The volunteers then take this information back to their villages and share what they have learned with the local women. Almost 40 volunteers showed up to the training program, representing the 5 different villages that the health camp aimed to serve, which was an incredible turnout. During the program, Indira welcomed the women, I awkwardly introduced myself and my work while Chanda translated, and then Chanda led the educational portion that reviewed the details of uterine prolapse. Pamphlets that contained all of the pertinent information were distributed to the volunteers, and they took turns telling stories of uterine prolapse in their own villages. One woman animatedly described a woman who was in too much pain to stand due to her prolapse, but whose uterus would slip out if she stood. Many shared stories of women who constantly leaked blood and pus and the shame they felt because of it. Multiple told the group about women who had died due to complications from their uterine prolapse. All agreed on the importance of empowering women through access to affordable healthcare. 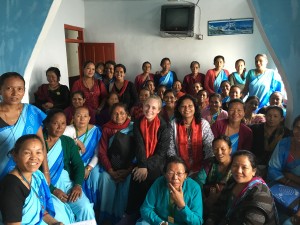 Indira and I with the Women Health Volunteers in Pakribhas

It was the week following the training session that we drove to Dharan to confirm the partnership with Dr. Mohan Regmi, a fistula specialist, at BPKIHS. He told me about their institute’s partnership with Johns Hopkins Medical School’s Global Health Initiative program, and I even had the chance to drop the line “I read an article about that in the New York Times” in reference to our conversation regarding the epidemic of obstetric fistulas in developing countries. While Dr. Regmi and Indira talked in Nepali, he would occasionally pause the conversation to tell me what they were talking about. At one point, he paused and said, “We are just talking politics. Where there is poverty, there is always a lot of politics.” He was warm and kind, and the meeting ended him giving us informational flyers about obstetric fistulas and a handshake. 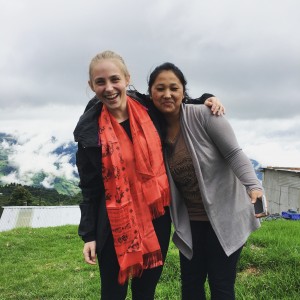 Chanda and I in Pakribhas after the Women Health Volunteers training

Two days later, Indira, Chanda, some volunteers, and I travelled to Khoku to look at the health camp site. The bumpy road to Pakribhas was child’s play compared to the road to Khoku. We planned to hold the health camp at Panchakrishna Higher Secondary School. The headmaster met us with beautiful welcoming gifts to place around our necks before showing us around the site. I’m still trying to figure out how it’s possible for all Nepali people to be so incredibly kind. The grounds were open, which would leave enough space for the crowds. A separate building would be used for registration, and classrooms would act as exam rooms according to the patient’s chief complaint. General check up and OBGYN would be in two separate rooms upstairs, medicine distribution and the ultrasound station would be downstairs, and eye exams would take place in a room in a separate building. The building used for general check up, OBGYN, medication distribution, and ultrasounds looked recently constructed. The space for registration was on a hill on one side of the main building. Although the registration room was a classroom, it didn’t seem like there was anything else in the building. Just a single, large classroom. The eye exams took place in the older part of the school that sat on the other side of the red building. The classroom was a littler darker and looked old and worn, but would still provide an adequate space for eye exams. 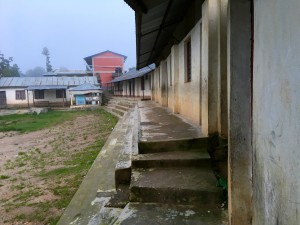 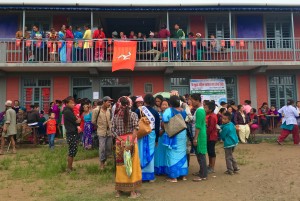 After touring the school, we met up with the WHV once again in a nearby village and distributed flyers about the health camp that we had printed while in Dharan and the pamphlets about obstetric fistulas that Dr. Mohan had given to us to hand out. The women were then to take the flyers, pamphlets, and information about the health camp back to their villages and distribute the information. We also rented a soundbox and walked around the village reading the health camp flyer, which was incredibly effective since it was the Wednesday market in town. Everybody gathered around us and stared, which was uncomfortable for me, but as I said: very effective. On our quest for publicity, we travelled to nearby villages to talk with locals, hand out flyers, and put up promotional banners. Along this road, we stopped at a hotel to book accommodations for Care Women Nepal staff, volunteers, and the doctors. 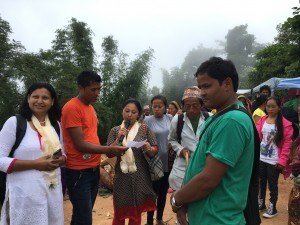 Chanda reads a promotional flyer in the middle of the market

Other parts of the planning happened here and there between Indira and Chanda. Volunteers were lined up and doctors were confirmed (with a little bit of difficulty and an extra trip to Dharan). ID cards and sashes were ordered and picked up. Badges for special guests were hand crafted. Medication, medical supplies, tokens of love, and letters of appreciation were ordered and brought to Dhankuta. Transportation was booked. Eating arrangements were organized, and Indira even bought a (live) goat and chickens to be prepared during the camp. 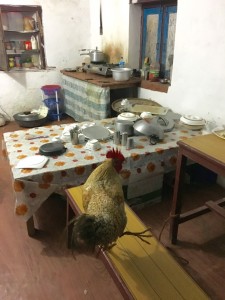 The live chicken I was surprised to find in the kitchen the night before we left for the health camp. The chicken rode in the car with us to Khoku before being prepared by a local family.

The week of the health camp was upon us and the office was full of anticipation and a little bit of stress. Naturally, I woke up grossly sick the day before we left for Khoku, but everything else was in order for an ideal health camp.