Improve the smell of the soap or don’t come back! 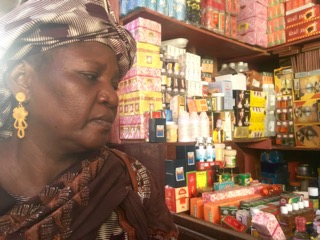 Aîssata Touré and I at the local market buying scents

“Rose, the shea butter soap is of high quality, but it smells bad. We need to improve the smell!”

That is what I kept hearing from The Advocacy Project team as I was preparing for my trip to Mali. So I went to Whole Foods and bought two bottles of scent (rose and lavender!), which I asked the Malian women to try out upon my arrival.

Soap has been my main focus ever since. I’ve been asked to improve the quality of the soap and help Sini Sanuman’s beneficiaries sell 5,000 bars of shea soap here in Mali and in the United States.

When I brought the scents to Sini Sanuman’s center for the first time, everyone came out to watch. Sylla the director, Aissata (the trainer who is in charge of the soap making), Awa (the project assistant) and the beneficiaries – they all gathered to see these new additions to the process. They were all curious like me to see whether the scents I had brought from the United States would make the soap smell better. We first tried two tablespoons in the mix, but the smell of shea butter was still strong. We tried up to five tablespoons, but that did not work either.  I ended up pouring the entire bottles of rose and lavender into the mix, but the result was the same. The shea butter smell was still dominant. 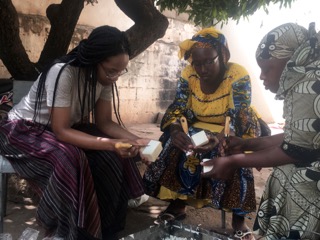 Awa, Aîssata Touré, and I trying out different scents

When the samples that I brought with me failed to improve the smell of the soap, I suggested that we look into local scents and oils. We bought five different scents at one of the biggest markets in Bamako. We tried them and three out of five scents produced a good result!

Also, our experiment seemed to bring everybody together. Siaka, the president of Sini Sanuman, got a call from Sylla (the director of the center) and left his office to come and see the new soap. Awa, some animators, and all the beneficiaries passed around the cups containing the soap with the new formula. I had never cared much for natural science before, but on that day felt like a scientist who has found a cure for a disease!

With that success behind us, we then turned to acquiring better molds and other equipment that is used for the production of the soap. Also, I am working on putting shelves in the storage room so that the soap ingredients can be maintained in order and kept off the floor where they collect dirt and get eaten by little insects.  My hope is that one part of the storage room will have shelves where the soap can be left to dry instead of being kept in the molds on the floor. On the other side, the ingredients would be kept to ensure they remain clean.

I also hope to hold a meeting with the center director, Aissata, and the beneficiaries next week to talk about the importance of cleanliness in making the soap.  This will require the women to wash, dry, and store away the equipment after use.

“Improve the smell of the soap or don’t come back!” 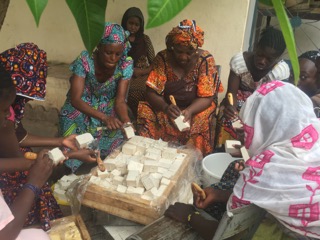