“In Your Name I Reaffirm My Hope”

Watch My Video on The Eye That Cries Here

What’s in a name? I’ve asked myself that question a number of times and in Peru I’ve found the answer to be, that behind it there is a strong human association, a person, and an identity. The significance of a name has never been so profound for me until working with EPAF and speaking to survivors of the conflict who still grieve their disappeared family members. In all of the interviews I conducted with survivors they shared with me the full name of each missing family member, as an affirmation of that persons existence. I understood that that disappeared person’s name was important to share, and to say aloud, even if with only a stranger, as that name represents what is left of that person through their loved ones’ memory. It is also a name that has been politicized because of the battle over memory and the continual struggle to be reunited with them, even if that reunification is brought in the form of truth. 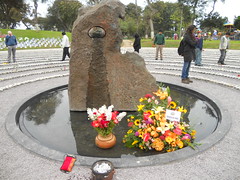 This significance became even more known this past Monday when I joined EPAF staff members and other members of civil society at the commemoration ceremony in honor of the upcoming VII anniversary of the Truth and Reconciliation Commission at the memorial piece, “El Ojo Que Llora” (The Eye That Cries).  As I had previously mentioned in my blog devoted to this memorial site, The Eye That Cries has been a very controversial public display within Peru because of the consistent battle over memory and whose memory to mourn. The stones that surround the memorial site have the names of victims, perpetrators, and bystanders of the conflict. It is a mourning site but also a stone devoted to remembering a brutal history as a reminder that never again should it repeat itself. 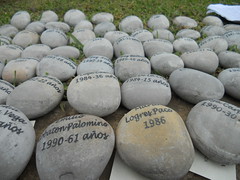 EPAF has an entire crew devoted to maintaining and validating the memory that these family members of the disappeared cherish, as in most cases, it is all they have. But in addition, memory is used to extensively document information necessary for the recovery of the human remains, for the moment when the graves are granted government permission for investigations. This is also known as ante mortem data, or information that fill in the gaps for the forensic investigation, such as what that person was wearing the last time he/she was seen or any physical disability that might easily mark their remains. The scientific aspect of this work is that it isn’t discriminatory in whose remains are recovered.

Last Monday, in an effort to retain the memory of those that were killed and disappeared, the Peruvian public, were invited to reset the stones that surround the sculpture. The stones had originally had the names of victims written in permanent marker but due to pollution, weather conditions, and the violent attack on the sculpture in 2007, many of the names have now faded. Therefore, the Unique Register, created by the Council of Reparations, is now working to inscribe the names so that their names are permanent.

Even as an outsider, I was invited to participate and given a stone with the engraved name of someone who didn’t survive the conflict, to be reset within the memorial site. Through my participation and by holding this stone, I was struck by the hope (esperanza) that still permeates within these peoples’ hearts. 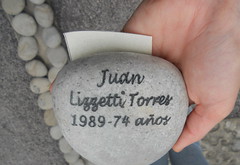 Esperanza has also been a continual association as the fuel that helps ignite the struggle for truth and justice. Hope is everywhere that the memory of the disappeared is. It was present in the campaign for the Stop of Hope in Putis, the Scarf of Hope, that now extends to 340 meters, and written in flowers, above the pictures of the disappeared at The Eye That Cries. Hope is also behind the names of the disappeared as for the past twenty years it has outlived the ability to forget. 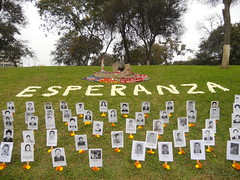 Hope is what supports those that still grieve in their fight for justice, reparations, and the refusal to surrender to impunity.