Intersection of Advocacy and Medicine

Note: I had some technical difficulties that stopped me from posting this earlier, but better late than never! If we were to build a timeline, this would slide in right between my chaotic first day in Biratnagar and the third day where I was able to talk with the women after their surgeries. I wasn’t able to take a lot of pictures, so this post may be a bit text heavy!

I was wearing pink socks with grey elephants on them, my lucky socks. I hadn’t expected anybody to see them. Nobody in Nepal wears close toed shoes, everybody wears sandals, but it hadn’t crossed my mind that I would be required to wear rubber sandals while in the operating room. Close toed shoes, I had thought, maybe even close toed shoes with disposable covers slipped over them. I felt like a child again with my socks, too big rubber sandals, and oversized scrubs in a room full of specialized surgeons and nurses. Water dyed red with blood pooled by my feet and I moved so a surgical tech could wipe it up with a green surgical towel.

Dr. Gyanendra Man Singh Karki was a big man both in space and presence. He spoke openly and assertively and acted in the same way. His English was accented with Nepali and Russian, but he spoke it very well. You could tell that he was important simply by the way people moved around him. After we were introduced, we spoke about healthcare and medicine for fifteen or twenty minutes with two hospital administrators and Chanda standing by. Part of me felt like I was meeting one of my own and the other part felt like I was desperately trying to convince him to feel the same about me. 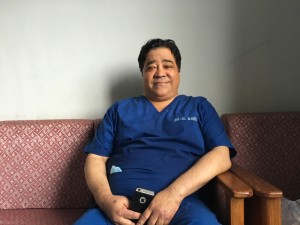 Dr. Karki sits in the break room after a long day of surgeries

Dr. Karki specializes as an Obstetrics and Gynecological Consultant with a subspecialty in Gynecologic Laparoscopic Surgery. During his medical career, he has performed at least 5,000 surgeries to correct uterine prolapse. In fact, his record in one day was 35 operations. He smiled proudly as he told me that he just spent the day switching back and forth between operating rooms. I melted a little bit inside. The perfect day. According to him a vaginal hysterectomy without complications should take around 15 minutes. If you’re curious about the math, 35 surgeries at 15 minutes each is 8 hours and 45 minutes of staring straight into the eyes of a variety of vaginas…and that’s if there are no complications. Later, an administrator noted to me that Dr. Karki performs the surgery in half the time of other surgeons at the hospital. It was then I vowed to marry one of his sons so he could never rid himself of me.

In all seriousness, Dr. Karki made it very clear that uterine prolapse is a global epidemic. Women in developing countries in Asia and Africa are affected at much higher rates than what is reported. A few years ago, Nepal’s government pledged to fund the operations for women who suffer from uterine prolapse. Throwing out numbers, Dr. Karki said that if the operation, hospital stay, medicine cost 500 dollars total, the government will only give the hospital 100 dollars for the operation itself. Birat Medical College Teaching Hospital allows the costs to remain low because of their status as a teaching hospital, which is why they have been taking on many cases since their opening two years ago. It is obvious that institutions such as this hospital and organizations like Care Women Nepal are absolutely vital in the process in helping the women of Nepal access this life changing operation. 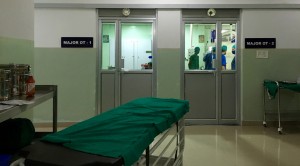 Straight ahead are both operating rooms, to the left is the sink to scrub in, and to the right is the delivery room. Also not pictured is the patient waiting room and the room where surgical tools are placed after use.

Dr. Karki agreed to let me into his operating room – telling me that American surgeons who don’t let people into their operating rooms are all going to hell. I laughed and the idea of moving to Biratnagar scampered across my mind. He explained that he is capable of doing the operation laparoscopically, but laparoscopy is all skill. “Vagina surgery is not only skill, it’s art.” 10-4. Noted. The operation doesn’t really begin until the uterus is removed, he told me, the most important part was repairing the ligaments to prevent future prolapse of the bladder or rectum – both of which could cause harsher complications than the original uterine prolapse did in the first place. 10-4. Also noted. Botched hysterectomies have been an issue in Nepal in the past, which has led to increased fear of the operation, but it was extremely evident that these women were in the most competent hands possible.

Before the surgeon enters the operating room, the patient is prepped and given an epidural. She’s positioned in the dorsal lithotomy position with her hips at the end of the table and her feet spread in stirrups. The anesthesiologist puts her under, and she is completely covered except for her cleaned and prepped vagina and anus. The labia majora are anchored back on the top and each side. Dr. Karki enters to a staffed and stocked operating room that’s ready to receive him. Somebody places a stool underneath him and clips him into this canopy apron thing that allows him to drop his surgical tools in front of him without them actually going anywhere. He begins by injecting the uterus and vaginal mucosa with a solution that increases visibility of tissue planes and reduces blood loss. The uterus and cervix are then removed in a series of intricate but not particularly delicate steps. At one point, he performed an operation using what looked like the intramyometrial coring technique which requires splitting the cervix. Let me tell you, a split cervix and uterus looks a fair amount like a halved brussels sprout. Just something I’ll remember fondly next time I eat brussels sprouts. Anyway, the pelvic floor and all of its ligaments are then carefully repaired – a step accompanied by a lot of stitching and irrigation, hence the bloody water around my elephant socks. He finishes by touching up his work and manually checks the vagina and rectum to make sure that everything is secure. There we have it, folks, a prolapse free vagina! 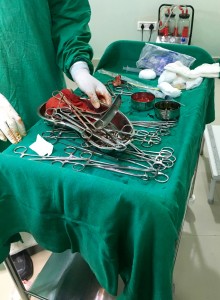 I almost started crying two minutes into the first operation because I felt the beauty of his work deep in my bones. It was art in a way that I had never experienced, but no other word captures the power of his work so well. Not only that, but I finally felt at home in the operating theater in a way that I hadn’t felt since arriving in Nepal. It was the first time I wasn’t openly stared or gawked at and even though I didn’t speak the language, I had a sense of what was happening. Dr. Karki even went as far as explaining what he was doing throughout the operations so I could stay engaged in the process. Most importantly, I found myself in a small medical oasis where I inherently understood the culture. I quickly came to realize that the archetypal clinical and confident personality of a doctor is almost universal, and that knowledge was oddly comforting. Dr. Karki and I ate lunch and chatted between a set of operations as if he hadn’t been chopping and sewing vaginas all day. During one operation, he asked me if I liked reggae and started singing Bob Marley as he stitched up the ligaments. Between a different set of operations, he noticed me eying the delivery room, so he marched right in there and brought me out a baby that had to have been less than 30 minutes old. I could’ve sworn the mother was still bleeding on the delivery table. The whole day was a surreal mix of pleasant conversation and operating rooms – the kind of day that makes you look around and say, “How did I get here?” Maybe the most amazing thing was that Dr. Karki was so incredible at his work that he had earned every right to be confident and slightly playful. Or maybe even more amazing was that I found myself at the true intersection of advocacy and medicine. 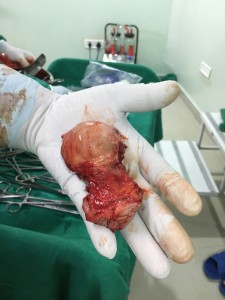 The removed uterus and cervix – which I legitimately considered taking after Dr. Karki jokingly offered it to me as a souvenir