Is Education the Answer?

Life is Gutu is generally peaceful and quiet. The only traffic consists of the local bus or the odd motorbike powering through the village lanes. The only lights are the candles or torchlights of those out for an evening stroll. Nevertheless, there are two things that destroy this peace: firstly, the music at a wedding or a local party, which resonates throughout the village on a fine Friday night, and secondly, the sound of excitable schoolchildren on their way to start school at 6am.

Our home in Gutu was right beside the lovely school of Giwan Gyoti, the local primary and secondary school. Despite the early hour, the cheery and enthusiastic voices of the children ensured that I awoke with a smile on my face each morning. It became so clear to me that these children loved meeting their friends and coming to school. It was a place for them to learn all about the world and the things in it. In school, they were not required to help their mothers cook or clean; to carry water or to work on the fields. In school, they could act their age, they could play, and they could have fun.

But then I thought of all the Chhau Goth’s that I had seen. These constructions were usually so small that girls couldn’t sit upright in them and most didn’t have proper walls or doors. None of the Chhau Goth’s that I had seen had electricity or running water, making it impossible to read or study after nightfall. I wondered: how on earth do girls survive in those conditions and come to school?  Do they even come to school when they are on their periods? And if they don’t – what are the long-term consequences? 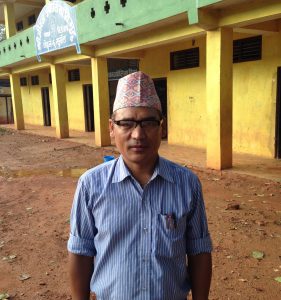 This surprised me. I couldn’t imagine spending the night in a Chhau Goth and then being required to study and work hard and school. But Mr. Obrahadur explained that girls feel comfortable and secure coming to school during their periods, because there are adequate resources for them: “We have distributed free pads in schools, and we have taught the girls to use them properly. We have also taught the girls and boys to make reusable pads with their own hands! We also have a separate restroom for girls to change their pads and rest if they are having cramps. We make it very comfortable for them.”

I was impressed. Even in Scotland we don’t have separate rooms in which to rest, and pads have only recently become free. It seemed that this particular school was going out of its way to ensure the safety, security and comfort of young women during their periods. But I did wonder whether this was universal.

“We also have classes about menstrual management and hygiene,” Mr. Obrahadur continued, “We teach the girls about the danger of staying in the Chhau Goth during their periods. By educating girls, we hope that the young generation won’t practice this tradition.” 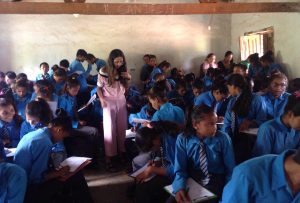 Students complete worksheets about the importance of menstrual hygiene

But is the education of young women enough? After all, they will go home at the end of the day and they will be forced to abide by the rules of their parents and grandparents. “Even though educating the girls helps to end the practice of Chhaupadi, it is not enough. We need to work with the communities as a whole. These girls will only have power when they are grandparents themselves, which is won’t be for a long time! For that reason, their elders must be educated as well!” he added.

Even though this particular school has made menstruation as comfortable as possible for these young women, the reality is that many will be forced to sleep in the Chhau Goth when they go home. They might be denied water and nutritious food, leaving them lacking energy and enthusiasm. They might get sick and miss school. And if a girl misses five days of school per month during her period, she is missing two months of school during the year. This has the potential to put her at a massive disadvantage against her male peers.

Nevertheless, I must commend Mr. Obrahadur for creating such a menstruation – friendly environment, in which discussion and debate about menstrual health is rife. Whilst I am sure that many schools do adopt such measures, I am told by Ram that this is uncommon. I believe that an open attitude towards menstruation can vastly improve the experience of a menstruating girl, and I can only hope that all schools, especially schools in rural areas, will adopt such attitudes in the future. 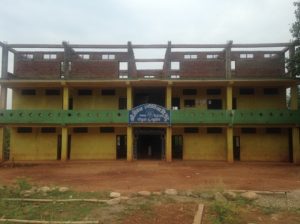