It’s All in the Details

Sarita came to Kathmandu a few weeks ago, so we went fabric shopping for the tiger bags. Before that we had check some guide from Vendel Miniatures. After discussing what kinds of bags would sell in Nepal with Sarita and Prabal and reflecting on the kinds of bags that would sell in the US, we decided to look for fabric in a variety of colors with some texture or a simple pattern. We initially purchased an emerald green and a deep brown. However, we quickly found ourselves out of luck after our first purchase as we visited many shops without finding fabric we liked. We decided that Sarita would go to Nepalgunj, a city two hours east of Bardiya, to find better quality fabric in the colors and patterns we were looking for. 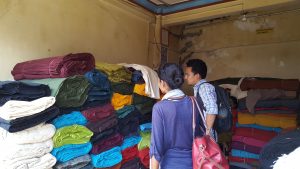 Fabric shopping with Sarita and Prabal in Kathmandu

On Tuesday, Prabal and I traveled to Bardiya. Prior to arriving in Bardiya, I created a flyer and updated tags explaining the cooperative and the bags. In addition to the physical production of the bags, marketing is integral to sales which is the primary focus at this stage in the development of the cooperative. After printing and laminating everything, we attached the tags to the finished tiger bags. 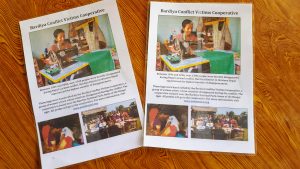 Flyers explaining the cooperative and bags 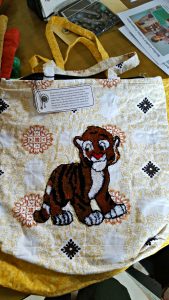 On Thursday, we brought some of the most recent bags to the tourist lodge that currently has the first iteration of the bags. The owner of that lodge had agreed to sell the bags without taking any profits. Unfortunately, his lodge doesn’t have any place to display the bags, so he suggested we come back with a small display case to show the bags and protect them from the dust. Sarita and Prabal will find a small, inexpensive cabinet to bring to the lodge. On our way out, we collected the first iteration of the bags so Sarita could repair and improve them. After seeing them for the first time, I was amazed by how much the women’s embroidery skills have improved.

Following the lodge, we went to Bardiya National Park where we spoke with the manager of the main office and gift shop. He was very excited about selling the bags as they are a unique, local, handmade product. He said they would sell the first batch of bags during the upcoming tourist season without taking a profit. If they sell, the park will buy bags from the co-op moving forward and sell them for a small profit that is agreed upon by both parties. He recommended Sarita embroider the words “Bardiya National Park, Nepal” on the next batch of bags for the park. We left six bags with the National Park and a poster, which they will display in their shop. Sarita, Prabal, and I were very excited about this positive step forward! 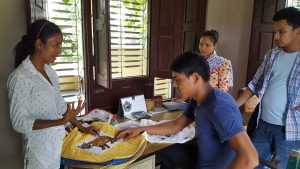 After returning from the National Park, I created a google spreadsheet with a picture of each bag to track important information including which vendor each bag is distributed to, when each bag is sold, how much they are sold for, etc. In the next week, Sarita will produce 7 more bags with the remaining tiger squares. She will be bringing those bags when she comes to Kathmandu next week, so I can take some bags with me to sell in the US. While it’s not a sustainable long term strategy to sell bags in the US due to logistical challenges and transport costs, I’m aiming to sell a few to infuse the cooperative with some cash as it aims to increase its production for the upcoming tourist season.

As I mentioned in my first blog post about the cooperative, after selling the tiger bags this year, the women want to rent a space to open their own shop near the Bardiya National Park. To support the women in growing their cooperative into a sustainable business, please consider donating at our Global Giving Page. By next year, we aim for the cooperative to be entirely self-sufficient!