Seated on the balcony of my summer home, I watch the sunlight fade from my fourth day in Nairobi. Below the balcony, I can hear Chris and Jared—two of the guards who patrol my complex’s gated entrance—commenting on a soccer match they are live streaming on a smartphone. Closing my eyes, I listen to the familiar passing of traffic and the playful shrieks of the neighbors’ kids. Reminders that I am in a developing country are not audible, but rather evident in visual cues. I am grounded in Kenya by the expanses of debris, trash, and barbed wire that line each dusty road; by the bursts of lush greenery that somehow find life beneath the rubble; and by the women who park themselves in patches of shade aside the potholes and sewage streams to sell their produce day after day. 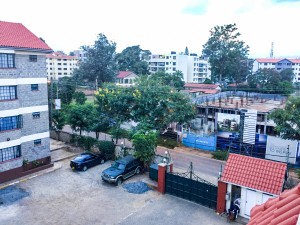 View from my balcony

Outside my apartment, dwells the fever of a city pulsing with a cultural desire for the cosmopolitan amidst structural evidence of underdevelopment. Inside my apartment, dwell my three friendly roommates from Japan, Canada, and Sierra Leone. I was delivered to this new home of mine last Thursday by my Kenyan Welcome Party, two of my CPI colleagues who went out of their way to greet me at the airport upon my arrival. They also brought along 9-year-old “John” and 4-year-old “Jane”—two children whose lives have been enriched by my colleagues’ compassion—as the official holders of the karibu signs made for me. 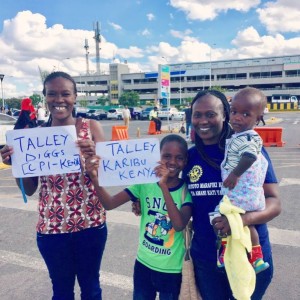 My Welcome Party outside the airport!

“Karibu” is Swahili for “welcome,” and welcomed I immediately felt when I rolled my luggage cart out of the airport and onto the hot tarmac where “John” was waiting for me, his kind brown eyes, once on the verge of blindness, peaking over the handmade sign. Getting through customs and retrieving my baggage had taken far longer than my colleagues had anticipated; I later learned that for nearly two hours “John” had stood in the parking lot positioned towards the exit with his sign, refusing to put it down until he knew I had been properly welcomed. 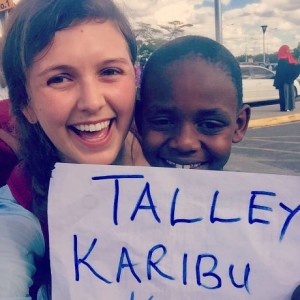 Is that the Kenyan heat melting my heart or his smile?

I quickly became a subject of interest to “Jane,” who had never seen a “mzungu” (a word to describe a foreigner or white person) up close. She spent the entire day on my hip staring with amusement at my face. Maybe it wasn’t the pallor of my skin that entranced her, but rather the observation that I couldn’t stop sweating on what was considered a “cool winter day” in Kenya. “Jane” and I became best buds—a Kenyan in her knit hat and sweatshirt, and an American sweating through every piece of fabric that touched her skin. 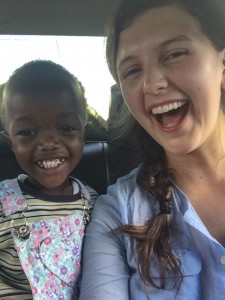 Nothing but smiles on our drive home from the airport.

I am four days into this adventure, and the karibus have not ceased. My hosts at CPI have offered me constant support, from calling just to check in that I’m not bored or lonely to driving me around for all sorts of errands. It’s obvious that the men and women at CPI care about people—and this powerful attribute makes them effective peacebuilders with the ability to impact conflict in pastoralist communities. I have so much to learn from their altruism and drive. They have made me feel overwhelmingly welcome in their country, and for that I am grateful. I thought I knew hospitality, but Kenya is giving the American South a run for its money. Even the Kenyan veggie plate, seen below, rivals that of the South. 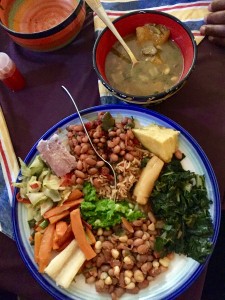 All for $1.50 at a hole-in-the-wall cafe outside my office. This will be my go-to lunch spot.

I have also enjoyed warm welcomes from members of the huge international community brought to Nairobi to work for the UN and myriad NGOs. My Canadian roommate, a soccer coach who educates adolescent players about HIV, invited me to play soccer with his team. Few people know that I played soccer for nine years and adored the sport. After I stopped playing in high school though, I never touched a ball again out of counterintuitive fear and embarrassment that I wouldn’t be “good enough” anymore. 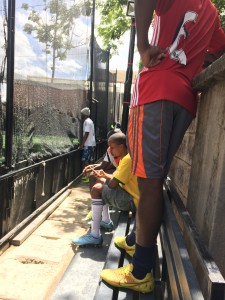 Put me in coach! Waiting to play.

Uninhibited by the general sense of adventure and discovery that is consuming me these days, I spent Saturday afternoon playing soccer with new friends from around the world as well as with kids from Kenya—who made even our best players look like amateurs. I sweat my heart out, I looked like a buffoon, and I smiled through every minute of it. Our team shared a round of East African beers afterwards, and I cheers’d myself to the fact that I had been the only female present on the field at the soccer complex. 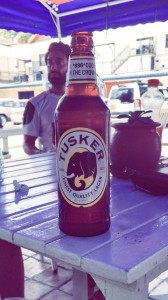 Much needed refreshment after the game.

The invitation to the match turned into an invitation to a party that night at the home of a group of Chileans to watch a stream of Real Madrid’s game projected onto a white wall. At least seven nationalities were present and introductions were being made in a dozen languages across the room, a testament to the ripe international scene in Nairobi. Most of us are only in Kenya for a limited period over the summer, so everyone was eager to find a buddy for touristy sightseeing. Exchanges of whatsapp numbers took place following promises to visit Ngong Hills and Nairobi National Park. This morning I fulfilled one such promise to a friend to visit Karura Forest, a beautiful park in Nairobi full of winding trails of red clay that lead to views of waterfalls, caves, monkeys, waterlily-topped ponds, and trees out of a Dr. Seuss book. 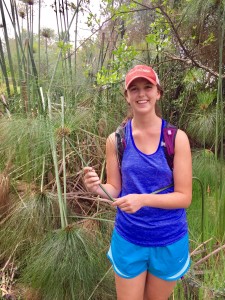 Listening for Whos of Whoville on this Dr. Seuss-esc plant. 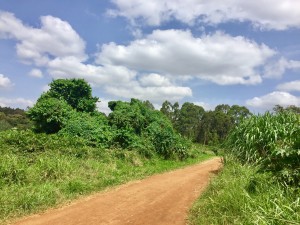 Traveling along the many kms of trails in Karura. Taken right after we spotted monkeys! 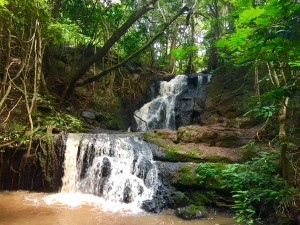 I’m brought back to real time by Chris and Jared’s cheers beneath me over a scored goal. Still perched on my balcony in the dark, I take a few moments to appreciate my bountiful karibu to Kenya…until the mosquitos picking at my ankles finally encourage me to turn in for the night. Tomorrow begins my first full week working with CPI! Stay tuned for upcoming blogs on our work to promote peace between children of differing tribes and my trip to villages in the north later this week.

Wondering what you can do to bring peace to Kenya? Please click below to contribute to our work with pastoralists through Global Giving!