Bryan Lupton (Survivor Corps – Gulu Disabled Persons Union – GDPU): Bryan received his B.A. in English Literature from Colorado State University. While at school, he volunteered at the Northern Colorado AIDS Project, a local NGO that provides free health and social services to clients across Northern Colorado. From 2006 to 2008 Bryan served as a US Peace Corps volunteer in Zambia where he coordinated HIV/AIDS prevention training programs in rural areas. At the time of his fellowship, Bryan was pursuing a dual Master’s degree in International Affairs and Public Policy at Columbia University’s School of International and Public Affairs and the National University of Singapore’s Lee Kuan Yew School of Public Policy. His research focused on International Security and Diplomacy. After his fellowship, Bryan wrote: “I have learned a lot about the history and violent conflicts of Central Africa and it has made me more considerate of these issues when thinking about the region.” 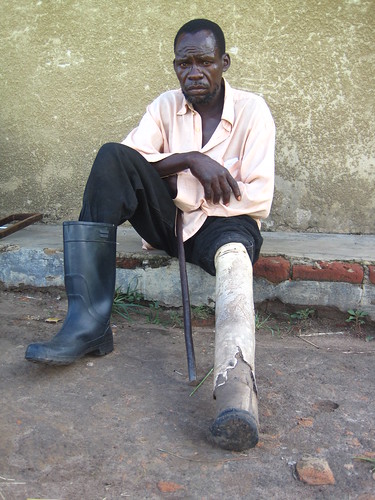 Peter Kilama is not a soldier. Or a rebel. In 1996 he was working in his own garden at his own home when he was blown up by a landmine. He lost his left leg above the knee, and nearly his life. He spent more than six months in the hospital living in “a lot of pain and fear.” He recovered, and received his first artificial leg in 1999; the same one he has today. Generally in the US, prosthetic limbs are replaced every two or three years.

Peter joined the Advocacy Committee last year to learn about his own and his community’s rights. The training at Alero helped him understand the mandates that exist to guarantee rights to persons living with disabilities, but which are not enforced in Uganda, or in much of the rest of the world for that matter. He told me, “The training has given me strength and a lot of skills. I’m very happy about it.” Now he says he wants to “help other people who don’t know this information about disabilities.”

Now that he has this information, Peter’s group is responsible for disseminating this information to other members of the community. They will be performing dramas, writing songs, and eventually, holding their own trainings on the rights of persons with disabilities. This kind of information sharing is critical to the development and rehabilitation of Northern Uganda. In fact, everyone at the training agreed that unless you know your rights, you can’t ever expect to receive them. The Alero Advocacy Committee knows that, and they’re doing something about it.